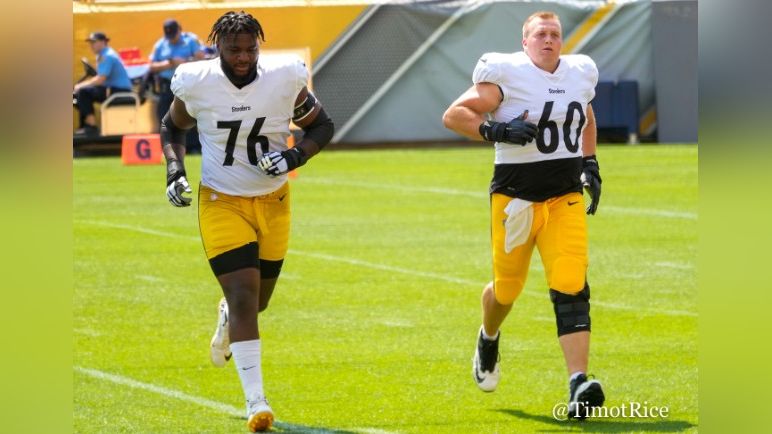 Chukwuma Okorafor is the only offensive lineman on the Pittsburgh Steelers who has been with the team for more than two seasons, if you go by accrued seasons. J.C. Hassenauer was first signed in 2019, but did not make the team until the following year.

A third-round draft pick in 2018, Okorafor is now going into his fifth season, and his second as a projected full-time starter. The Pittsburgh Steelers re-signed him on a three-year contract worth just short of $30 million. And with that comes greater responsibility in the offensive line room.

“It will be different not having Ben [Roethlisberger] around, but it’s also a change that was eventually going to happen. I want to be a part of the change”, he said back in March after signing his new contract. On becoming a leader, he added, “I feel like at this point I don’t really have a choice. I think that is something I have to do. I have had a little bit of a talk with Coach Tomlin. I think that is going to be my next role, how to lead better”.

Fortunately for him, the Steelers added two veteran offensive linemen via free agency who can fill that more vocal leadership capacity in James Daniels and Mason Cole, both of whom are already seemingly taking the mantle on that front. It’s really not Okorafor’s strength, as he acknowledged during OTAs.

“Honestly, for me, I can lead by example”, he said, according to Chris Adamski of the Pittsburgh Tribune-Review. “I’m not the type to go out there and yell and scream”, he added. “I just try to be more myself”.

Okorafor started one game as an injury fill-in during each of his first two seasons. He lost training camp battles in both his second and third seasons, the first time in an open competition which Matt Feiler won. A year later, Zach Banner beat him out in 2020, but suffered a torn ACL that has completely sidetracked his career.

That injured resulted in Okorafor making 16 starts, including the postseason, that year, and he started another 17 in 2021, although this time, he was projected to open the season as the Steelers’ starting left tackle. Banner’s unavailability forced the coaching staff to make last-minute adjustments shortly before the start of the regular season, which kicked him back over to the right side.

That is where he figures to stay this year, the team hoping that second-year fourth-round pick Dan Moore Jr. will continue to grow into that role as the blindside protector. He did show modest growth during his rookie season in the second half of the year.

As for Okorafor, he won’t even turn 25 years old until the preseason. He is still a young player himself with growth potential, especially when you consider the fact that he didn’t pick up the game of football until he was in high school.