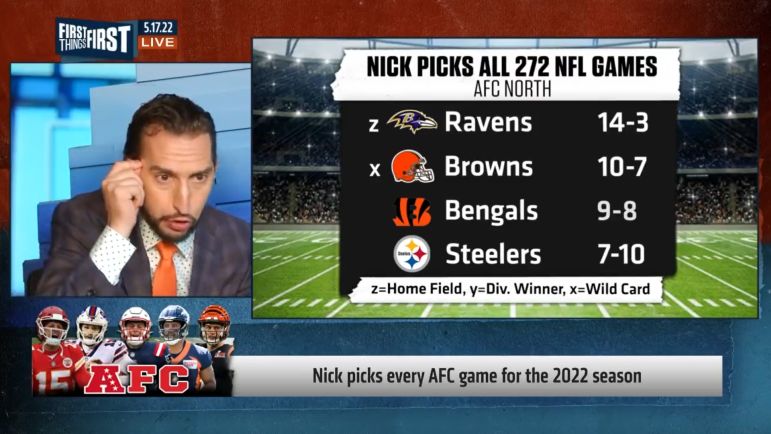 There comes a time during the year where you just have to start guessing how many games your team is going to win—and how many games every other team is going to win, as well. This typically falls after the draft once the schedule officially comes out. Even though you already know all of the teams on the schedule, it’s after the days and dates are known that everybody comes out with their record projections.

One of the latest is from Nick Wright, who made a full NFL projection on First Things First recently, and he wasn’t overly kind when it came to the Pittsburgh Steelers—in fact, he offered only passing comment after devoting significantly more time on every other AFC North team, particularly the Ravens.

.@getnickwright picked every single AFC game for the 2022-23 season!

He breaks down each division and makes his preseason playoff picks: pic.twitter.com/rbmvQUogqd

That’s because he has the Ravens running away with the division, going 14-3. And he has the Browns going 10-7, with the Bengals slipping to 9-8. The Steelers bring up the rear with a 7-10 record—and no explanation, naturally. But he had plenty to say about the team that finished fourth in the division last year.

“Baltimore—folks, am I the only one that remembers the Ravens were the number one seed in the AFC last year before Lamar got hurt”, he said, “and that was despite the fact they had already lost all their running backs due to injury, and then later in the year they lost all their secondary due to injury? The Ravens are a regular-season juggernaut”.

That all certainly sounds good, on paper anyway, but it’s never easy to win 14 games, and especially not when the divisional balance is perhaps the strongest that it’s been in years. Does he really think Baltimore will dominate the AFC North—or are they only going to lose to divisional teams?

As for the Browns, his explanation for their record is that he expects them to go on a run late in the year, presuming that Deshaun Watson is suspended for no more than eight games, but evidently under the assumption that he will indeed be suspended this year. Currently, there is no clear indication that he will serve a suspension in 2022 specifically.

The Bengals won the division with a 10-7 record last year and came within a minute of winning the Super Bowl. A year later, they don’t even make the playoffs, finishing third in the division and outside of the top seven in the conference. Why? Super Bowl hangover, he says.

Finally, on the Steelers…as I said, he offers nothing, simply a throwaway line of their finally having a losing season, and a “sorry, Mike”. Very informative there, Nick. But thanks for reminding everybody that the Ravens had a lot of injuries last year, as if everybody doesn’t offer the same reminder constantly when explaining why they went 8-9.