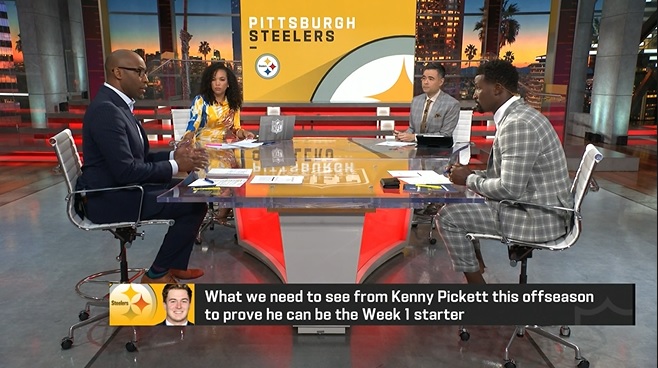 Bucky Brooks knows what it’s like to be a wide-eyed rookie. Not as a quarterback but it’s fair to assume the jump there is ten-fold compared to most other positions. Appearing on NFL Network earlier Tuesday, Brooks, along with the rest of the NFLN panel, warned Pittsburgh Steelers’ first round pick Kenny Pickett of what’s in store for him this season.

“Players are looking at Kenny Pickett as a scout though I’m looking at him in comparison to the other quarterbacks that are in the room because the draft coming in only gives you pole position,” Brooks said. “That’s where you start out.”

Brooks himself was a rookie back in 1994, a second round pick of the Buffalo Bills. He spent just one year with the team before moving on with Green Bay the next year, a harsh taste of NFL reality and how quickly things change.

Pickett is the team’s first-round QB selected since Ben Roethlisberger in 2004, though circumstances are much different now. Pickett is entering a true quarterback competition whereas Roethlisberger was supposed to start the year as the #3 behind Tommy Maddox and Charlie Batch before injuries forced the Steelers’ hand. This time around, Pickett could earn the job out of the gate but will battle veterans in Mitch Trubisky and Mason Rudolph.

Brooks expanded on what that QB evaluation process looks like.

“Now it’s about how do you earn it? So I wanna look at his arm talent. What does his arm look like compared to Trubisky and Mason Rudolph? What does his game look like? And how does the offense respond to Kenny Pickett in comparison to those other guys?”

All important areas the team will be studying closely this summer. It’s harder to make evaluations during OTAs with the team learning, installing, and teaching. The real evaluation begins in the summer with training camp and the Steelers’ three preseason games, something we’ll certainly be closely watching. It’s conceivable any three of these quarterbacks could open the year as the starter, though Trubisky and Pickett are the top two candidates.

Panelist James Jones believes Pickett will win the job outright and be the team’s starter when they travel to Cincinnati Week One.

“I believe it’s gonna be Kenny Pickett, but I think [the team has] gotten better. I know Ben Roethlisberger is a Hall of Famer, but Ben could not stretch the field last year. Ben could not use his legs last year. Both these guys give you that weapon that you could run some read options. They could take shots down the field.”

Over the last two years, the Steelers’ offense was stagnant, unable to run the ball or throw vertically and forced to run a high amount of RPOs and quick-game concepts. Roethlisberger was also unable to work under center or change his launch points in Matt Canada’s boot-heavy offense, limiting the team’s menu of plays even more. Despite knowing a new quarterback will have his struggles, the Steelers’ playbook should be more open than it was a year ago.

Should Pickett he the guy, he’ll have unavoidable rookie growing pains but if he can avoid repeating mistakes and flash the talent that made him the Steelers’ choice, they’ll be on solid ground heading into 2023.