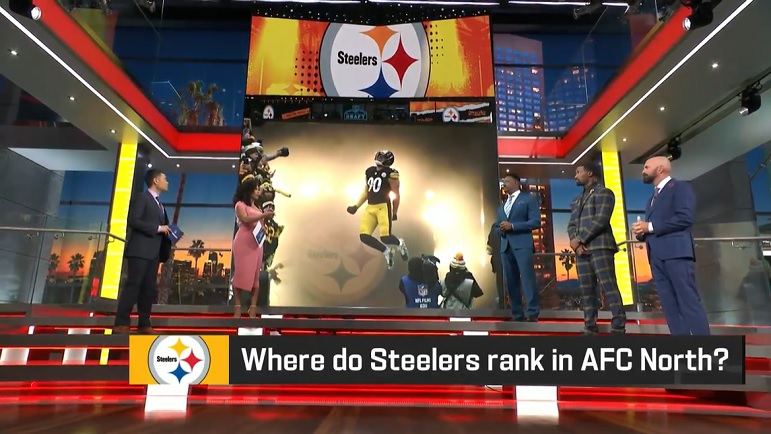 If you’re a Steelers’ fan, you won’t like what former NFL players Willie McGinest and James Jones have to say about Pittsburgh’s 2022 odds. In a NFL Network panel Saturday, both men picked the team to finish last in the ultra-competitive AFC North.

McGinest, a former Patriot who rivaled the Steelers in the early-mid 2000s, had this to say about Pittsburgh’s outlook this season.

“Just based on paper and off of last year, I know they finished second, but going into this year…you got the Cincinnati Bengals who went to the Super Bowl. I’m gonna start them off number one. The Baltimore Ravens were beat up last year, the entire backfield, Lamar Jackson, whatever you can think of, they were injured. Both starting corners, they were out… and then the Cleveland Browns on paper, probably one of the best teams in the NFL. I know they had some subtle losses, but they got the Deshaun Watson. So this automatically boosts the Cleveland Browns up to three. And I’m gonna say the Pittsburgh Steelers is coming in slightly [behind] at four.”

So to recap, here’s how McGinest has the AFC North looking.

It’s hard to give a wrong answer here in such a competitive division, recently ranked the second toughest in the NFL. The Bengals were the surprise team of last season, winning the AFC North for the first time since 2015 and breaking a playoff drought that dated back to 1990. Joe Burrow bounced back from a torn ACL and reunited with LSU teammate JaMarr Chase to form one of the best 1-2 duo’s in the league. Defensively, they added key upgrades in DE Trey Hendrickson and stole away Mike Hilton from Pittsburgh, who continued his slot success as a Bengal.

The Ravens battled injuries throughout the season, including losing their top two running back options in JK Dobbins and Gus Edwards before the season even began. They should be in a better place this year and as has become the norm for them, had a rock-solid draft class with two first round picks in Notre Dame safety Kyle Hamilton and Iowa center Tyler Linderbaum. Both will be Day One starters.

Cleveland is the wild card with their success tied to Deshaun Watson’s availability. The NFL is expected to issue any potential punishment for Watson before the regular season starts and likely before training camp kicks off. Some believe Watson will only be dealt a short suspension while others think he could miss the entire year. It’s also possible the league doesn’t suspend Watson at all. Beyond him, Cleveland still boasts one of the league’s better offensive lines and a dynamic duo in the backfield with Nick Chubb and Kareem Hunt. Chubb is arguably the best back in football while Hunt is a solid #2, so much so there’s a chance the Browns could deal him, get picks, and use D’Ernest Johnson as the backup runner this season. Defensively, the Browns have continued to add reinforcements, drafting CB Martin Emerson and re-signing DE Jadeveon Clowney.

Pittsburgh’s questions at quarterback was the reason why Jones agreed with McGinest and ranked the Steelers lost.

He’s of course referring to Mitch Trubisky and Kenny Pickett. Jones is right regardless of who starts, they’ll be the fourth-best quarterback in the North. Ideally, Pickett is everything the team drafted him to be and he becomes a top-half quarterback like the other names. But that could be a work in progress and it’s unlikely Pickett will light the league on fire out of the gate. The Steelers still have outstanding question marks up front and with their overall run game, something they’ll need to lean on heavily this year.

Adam Rank was the dissenter, believing in the Steelers’ underdog mentality.

“There’s something about the Steelers. Whenever you look at the numbers or anything like that, and I’m the numbers guy, they still make the playoffs. They still find a way.”

Aside from Rank going all Jeff Goldblum in his explanation, the national media is downplaying the Steelers’ chances this year. They’ve consistently shown up in the bottom half of power rankings and have undergone plenty of change this offseason. Pittsburgh’s built up a lot of cache as a consistent, competitive squad but for a team that hasn’t won a playoff game since 2016, its longest drought in decades, the Steelers need to prove they can turn the corner.