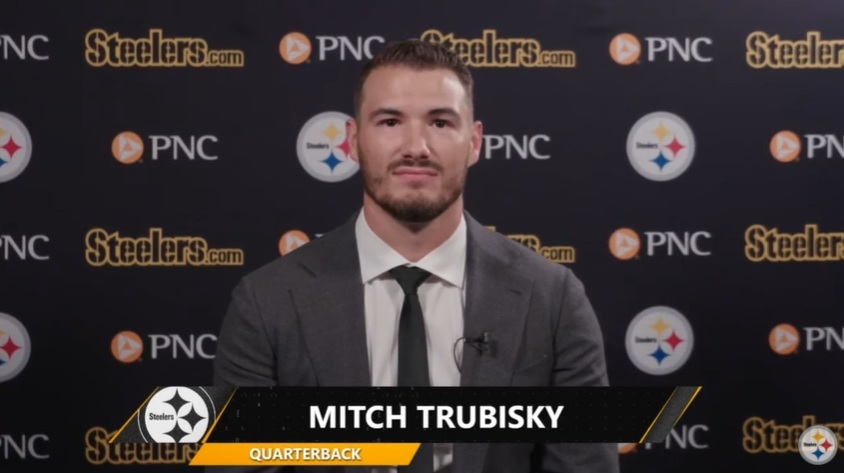 It’s been several weeks now since the Pittsburgh Steelers signed quarterback Mitch Trubisky to a two-year deal, and while most of the details of that contract have already surfaced, a few more crucial aspects of it surfaced Friday morning thanks to Albert Breer of Sports Illustrated.

Trubisky, as you can see by the details below reported by Breer, has an interesting 2022 play-time trigger included in it. Specifically, if Trubisky hits 60 percent playing time in 2022, not only does he get an extra million, another one million roster bonus then becomes due to him in March of 2023. Additionally, if Trubisky were to hit 70 percent playing time in 2022, he would get an extra $1.5 million for the season and then set himself up for a $4 million roster bonus in March of 2023.

The base value of the Trubisky deal is obviously still $14.285 million, and that includes a base salary in 2023 of $8 million. All of Trubisky’s contract incentives are obviously termed not-likely-to-be-earned, and thus won’t hit the Steelers’ cap until 2023 should he indeed hit any of them.

The Steelers obviously selected quarterback Kenny Pickett at 20th overall in the first round of the 2022 NFL Draft and with that, it’s easy to speculate that he could be the team’s starter by at least midway through his rookie season, if not earlier. In turn, Trubisky isn’t likely to have a long leash in 2022. Should he ultimately be the Steelers’ Week 1 starter, he will need to win right out of the chute to keep that job. You can bet the Steelers will be mindful of Trubisky’s play-time percentages as the season progresses.

In closing, and with us now knowing all aspects of Trubisky’s two-year deal, there’s a very strong chance that he might be one and done with the Steelers, especially if he hits the 70 percent play-time threshold in 2022. Why? Because there is no way that the Steelers will want to pay Trubisky $12 million or more in 2023 to be Pickett’s backup.

In short, Trubisky’s contract that he signed with the Steelers is essentially a one-year deal worth $6.285 that could possibly earn him up to $4.25 million more than that. So, it’s hard to imagine Trubisky being on the Steelers’ roster in 2023 at this point.

Looking at the full contract for Steelers QB Mitch Trubisky (details below), found a pretty interesting trigger in it. If Trubisky hits 60% play-time in 2022, there'll be a $1 million roster bonus due next March. If he hits 70% play-time, it's a $4 million bonus.