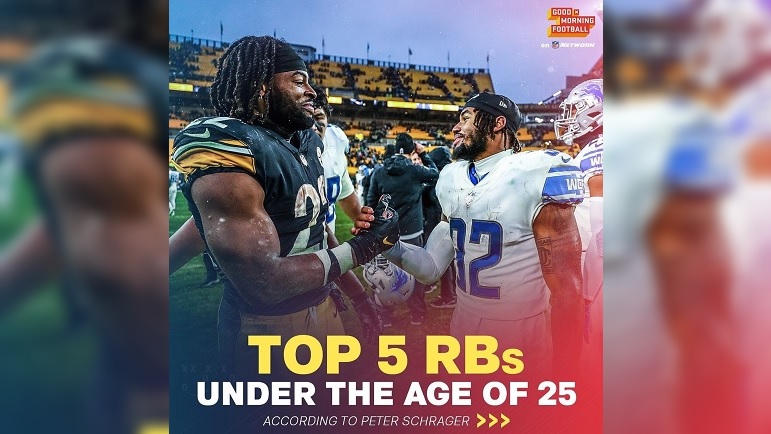 Yesterday, NFL Network’s GMFB Host Peter Schrager unveiled his list of the top 5 running backs under the age of 25. To no surprise, the Steelers’ Pro Bowl-rookie workhorse Najee Harris made the cut. The NFL leader in offensive touches a season ago with 381, Harris racked up 1,200 yards rushing, breaking Hall of Famer Franco Harris’ longstanding franchise rookie record of 1,055 that’s stood since 1972, albeit in 14 games compared to Najee’s 17. The team’s first-round pick in the 2021 NFL Draft wasn’t done there, as he also showed off his chops in the passing game, hauling in 74 catches, highlighted by a 14-grab, 102-yard effort in a game versus the Cincinnati Bengals last season.

“Najee came in as a first round pick, with all the expectations and delivered, and then went above and beyond what expectations were,” Schrager said on GMFB.  “Here’s the thing that I love: led every running back with 74 catches out of the backfield and led the entire NFL with 381 touches, in his rookie year. This is an incredible stat if you consider the fact that it was his first time on an NFL gridiron.”

In his sophomore season, Harris will undoubtedly be the focal point of a transitioning offense that will be able to employ a lot more diversity, given that whoever starts at quarterback, be it Mitch Trubisky or Kenny Pickett, are far more mobile than what Ben Roethlisberger was last year. Those 381 touches could stand to be reduced, but it’s been very clear over Mike Tomlin’s tenure that he prefers employing primarily one workhorse running back. The team did offer the largest undrafted rookie contract for a running back to Duke’s explosive Mateo Durant after the draft, so they obviously think highly of him. Benny Snell Jr. and Anthony McFarland have both been disappointments, so perhaps a free agent such as Latavius Murray or Devontae Booker could be worth a look.

An improved offensive line in front of Harris should only improve on his rookie numbers, as he was more often than not creating yards on his own, as a lack of sufficient blocking had him running into brick walls. The team signed arguably the top guard on the free agent market in James Daniels, center Mason Cole, and also re-upped their own tackle Chukwuma Okorafor. Kendrick Green’s disappointing rookie season at center may cause him to shift to a more natural position at guard, but thus far, there hasn’t been much concrete news as to who will play where, only speculation. However, one thing is clear and that is the arrow clearly is pointing up for Harris, as Schrager has him ranked only behind NFL rushing champ Jonathan Taylor of the Colts on his list.

“Najee’s just getting started, I believe this is just year one, and Matt Canada still is there as the OC. So much respect for this guy, huge personality, great face for the league and will be the face of the Steelers’ backfield for years to come.”