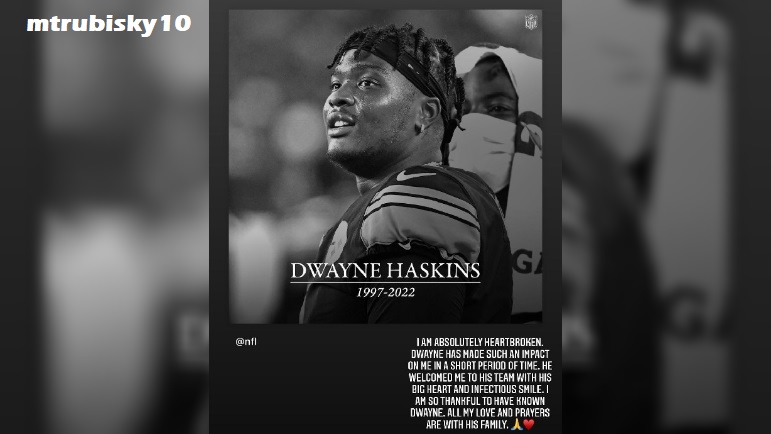 Hitting the field for the first day of Phase 3 of OTAs, there was a palpable excitement for Pittsburgh Steelers’ players and coaches Tuesday at the Steelers’ South Side practice facility.

Football was back, at least a lesser version of it in helmets and shorts. Morale was high and the general excitement of being back to work was felt in a number of answers from players in clips posted after practice, and even during practice in the brief glimpse the outside world was given to Day 1 of the OTA session.

For the Steelers’ quarterbacks room though, there was a notable absence, one that will never be filled again. Nearly two months since Dwayne Haskins was struck and killed by a dump truck in South Florida, he remains on the minds of Steelers’ quarterbacks Mason Rudolph and Mitch Trubisky, who spoke about their former teammate just one day after a toxicology report revealed Haskins was legally drunk and had drugs in his system at the time of death April 9.

Rudolph, who spent the entire 2021 season with Haskins by his side in the quarterbacks room working under QB coach Mike Sullivan while learning under Ben Roethlisberger, stated to reporters Tuesday, according to video via Steelers.com, that there was a sobering feeling that hit him when he walked into the QB room for the positional meeting.

“I walked up today to the quarterback room, like I had the last month and the guy used to sit across the room on the very same row as I did. And it’s just…sobering that he’s never gonna walk back in the room,” Rudolph said to reporters. “There’s been a lot of said about how great of a guy he was to go to work with, cuz he really was. And every time he came in the quarterback room, he had a smile on his face and he kept it light and he was a good teammate regardless of, you know, quarterbacks and competing against each other.

“That can sometimes be awkward as you guys know, but he was a good teammate to me and to everybody,” Rudolph added. “So, I’m still kind of adjusting to him not ever gonna be in the quarterback room again, which is sad, and it’s hard to wrap your head around. Death is hard, but we’re trying to move on the best we can.”

Rudolph was not in South Florida for the Steelers’ throwing session under new quarterback Mitch Trubisky, which also featured the likes of Haskins, Chase Claypool, Najee Harris, Pat Freiermuth, and more. Trubisky organized the event and was hit rather hard by the loss of Haskins.

Speaking with reporters Tuesday following his first official day as a Steeler on the practice field, Trubisky spoke glowingly about Haskins, stating that the thinks about him every day.

“So he’s in our hearts, and all we can do is go out there and honor him every day and how we live our lives.”