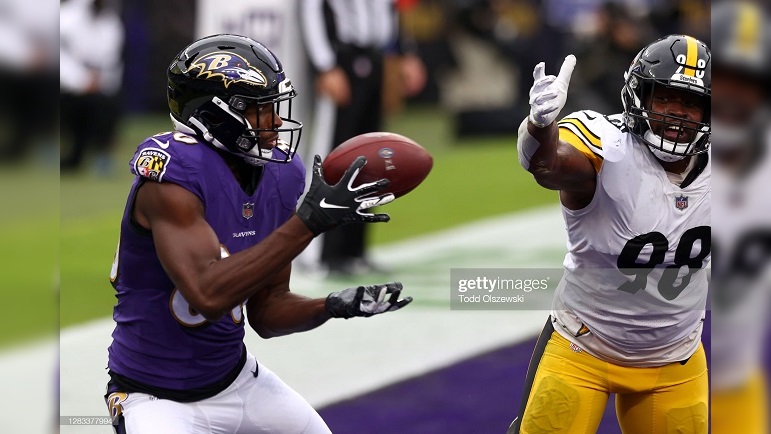 Were we talking about the Miles Boykin that was coming out of Notre Dame, the idea that the Pittsburgh Steelers would have been able to claim the physically gifted wide receiver off waivers because the Baltimore Ravens—the Ravens, the veritable wide receiver factory—released him would certainly seem absurd.

Yet here we are, a few years down the line, and Boykin is looking to compete for a bottom-of-the-roster spot for the Steelers this year. It’s where he wanted, and expected, to be when he came out of school, and now he has his chance to turn his career around in Pittsburgh after falling out of the rotation in Baltimore.

Boykin caught just one pass last season on one target for six yards. He played a total of 35 offensive snaps in eight games played, even though he also saw 144 snaps on special teams, which would have put him on track for over 300 snaps over a full season. So what happened? Well, injuries, for one thing.

Boykin missed the first four games of the season due to injury before returning to play five straight games with very limited offensive contributions. His injuries again held him out for another four-game stretch, and he also missed the penultimate game against the Rams, as well, but played—all on special teams—in the finale against the Steelers.

Boykin is 6’4”, 220 pounds, and ran a low-4.4 40-yard dash. From a physical and athletic standpoint, he is an incredible athlete, and really doesn’t sound all that dissimilar to Chase Claypool based on his profile. The 2019 third-round draft pick, however, has never managed to fully establish himself, though playing in a run-first offense did not help.

He has only 33 receptions in his career for 470 yards and seven touchdowns. But he logged nearly 1,000 offensive snaps combined in his first two seasons. The Ravens keep drafting receivers, though, and turning over their roster, and his Proven Performance Escalator meant they would have had to pay him more this year. Which is why he wasn’t surprised to be waived.

“I kind of knew about it since the end of the season. They kind of expressed that my hit on the salary cap was going to be detrimental to them”, he told Batko. He noted the contract negotiations—the ones they wish were taking place—with quarterback Lamar Jackson and others, saying, “I was kind of ready for it. I was prepared for it”.

But the Steelers thought enough of his potential that they were willing to take on his $2.54 million salary for 2022. At least, through the summer, anyway. They wouldn’t owe him anything if he doesn’t make the team, which would leave him back at square one.