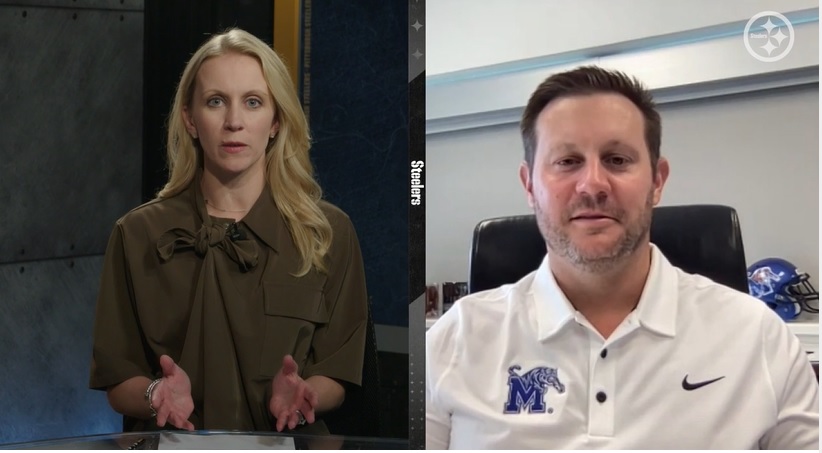 When Calvin Austin arrived at the University of Memphis, it was frankly hard to think he’d ever make it to the NFL, let alone be a mid-Day Three draft pick. Short and skinny, Austin profiled as a track guy and in fact, ran track for the Tigers. But he loved football too and Memphis head coach Ryan Silverfield watched Austin go from speedster to football player. Silverfield joined Steelers.com’s Missi Matthews to talk Austin’s career arc in a video shared on the team site Monday.

“He came here as a 149 pound young man and has grown into a NFL draft pick,” he told Matthews. “And I think the mindset and the approach for him is he outworks everybody. He’s one of those guys that would be after practice catching extra balls off the JUGS machine, spending extra time watching film. And so he’s one of those guys that not only will he have success immediately, but he’ll last for a long time because of his work ethic.”

It seems obvious to say but don’t overlook how much work ethic and personal drive determines NFL success. At this level, everyone is talented. Every player was the best guy on their high school team, had a great college career, and is part of the top 0.1% playing professional football. Those who separate themselves from that elite group are the ones who work the hardest. Self-discipline and work ethic is even more important at the NFL level. The pros are less structured without the rigid college schedule and offers more free time. In school, players have meetings and class and more meetings and then practice. In the NFL, players have more free time and the ones who go the extra mile are the ones who succeed. Work ethic is what turned the likes of Antonio Brown and James Harrison from unknowns into stars.

Austin’s proven to put in the work, becoming one of college football’s most dynamic receivers.

“Coming with a chip on his shoulder as a Memphis kid, as a walk-on and proving to everybody, getting to the senior ball and then being drafted.”

After being drafted, Austin told reporters he attended Memphis because it was the only school that offered him the chance to run track and play football. He was an otherwise incredibly light recruit and a legitimate zero-star prospect, according to his Rivals’ page. Now, he’s playing at football’s highest level.

Silverfield has only served as Memphis’ head coach since 2020 but he’s been on-staff for Austin’s entire college career. Now, he’ll watch him grow in the NFL and like he did in college, surprise a lot of people.