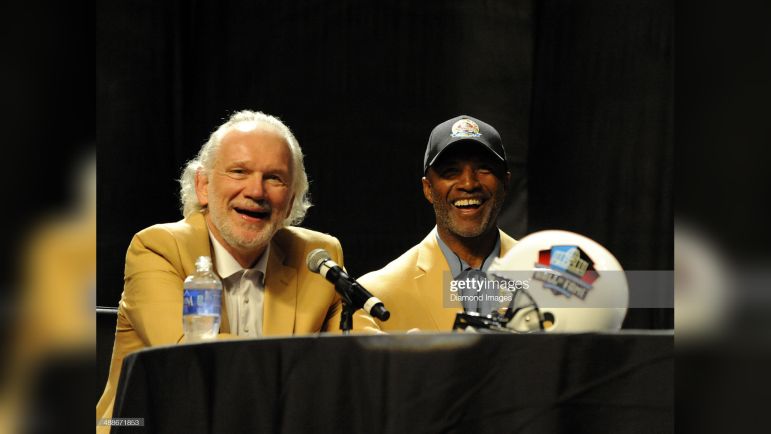 Jack Ham was a pretty good player back in his day. One of the best, in fact. In recent days, a sudden debate has flared over whether or not he could play the game in this day, thanks to former NFL executive Doug Whaley, who made a profoundly silly comment about Ham being too undersized to play in the NFL today.

But the good news is that we ended up getting a radio interview with Ham out of it, popping on 93.7 The Fan on the Cook & Joe Show with hosts Ron Cook and Joe Starkey, and as it turns out, he’s still a good interview today, and thoughtfully spoken to boot.

At one point during the interview, he was asked about some of his other teammates whom he thought would be able to play in today’s NFL. While his mind quickly turned to Joe Greene, he ultimately said of yet another Hall of Famer, cornerback Mel Blount, that he was “probably the top guy who could turn from one era to the other”.

All three, as well as Jack Lambert and Donnie Shell, are Hall-of-Fame members of the Pittsburgh Steelers’ ‘Steel Curtain’ defense that dominated the NFL in the 1970s. The play at linebacker of Ham and Lambert were as integral to that success as anything else—but they had stars everywhere, including at cornerback in Blount, whose praises Ham has sung before.

“When you create a cornerback, the mold is Mel Blount”, he once said back in 1989, quoted in a piece by Don Smith for Pro Football Researchers. “I played in a lot of Pro Bowls. I never saw a cornerback like him. He was the most incredible athlete I have ever seen. With Mel, you could take one wide receiver and just write him off. He could handle anybody in the league”.

You already know the backstory about the Mel Blount Rule and all of that, and how, in spite of the rule’s implementation, limiting his ability to use his physicality, he still continued to dominate the league for a number of years afterward.

But the thing is, Blount really could have played in any era—indeed, he still looks fabulous in the eyes of many. Whenever he makes an appearance, you’re bound to see somebody remark that he could still suit up and play today.

Mel Blount was a 6’3” cornerback back in the 1970s and weighed north of the 200-pound mark. He was a complete player, “the most natural athlete that I had ever seen in pro football”, as Ham told Cook and Starkey.

Over the course of his 14-year career with the Steelers over 200 games played, he recorded 57 career interceptions, including two returned for touchdowns, along with 13 recovered fumbles, of which he returned another two for scores. He was a five-time Pro Bowler, a six-time All-Pro, the 1975 Defensive Player of the Year, and was inducted into the Pro Football Hall of Fame in 1989 in his first year of eligibility—one year after Ham was inducted on the first ballot.