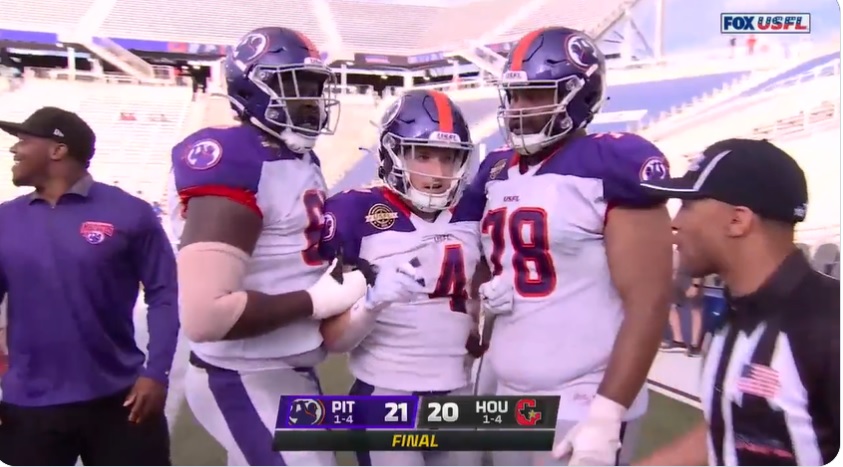 The Pittsburgh Maulers improved to 1-4 with an exciting last-second 21-20 win over the Houston Gambler on Sunday afternoon at Protective Stadium in Birmingham, Ala.

The Maulers opened the game with possession. On third-and-four from the Houston 45, QB Kyle Lauletta found WR Bailey Gaither down the right sideline for a 31-yard gain to the Houston 14. However, Pittsburgh couldn’t find the end zone, and K Rahmiz Ahmed missed a 38-yard field goal and the score remained 0-0.

RB Mark Thompson broke off a 39 yard run on the second play of the Gamblers’ drive, and Houston was in business. Two plays later, QB Clayton Thorson hit WR Isaiah Zuber for a 24-yard touchdown. K Nick Vogel’s extra-point was good, and Houston took a 7-0 lead with 7:41 left in the first quarter. Pittsburgh went three-and-out on their next drive, and Houston took over on their own 36. Houston was able to pick up chunk yardage, including a seven-yard reception to Thompson that had five yards tacked on at the end of the play due to a defensive holding against Pittsburgh. Houston eventually settled for a 45-yard Vogel field goal to take a 10-0 lead.

A 10-yard reception by Gaither on third-and-three gave the Maulers a first down, A roughing the passer penalty gave Pittsburgh another 15 yards, but on second-and-ten on the Houston 38, QB Vad Lee got sacked for a five-yard loss, and on third-and-15 Lee’s pass was incomplete. Ahmed hit a 51-yard field goal and the Gamblers lead was cut to 10-3 with 10:04 left in the first half.

Thorson fumbled the snap on second-and-ten which led to a third-and-22 run play. Thompson gained eight but Houston went three-and-out. Lee and Gaither connected for a seven-yard gain, RB Madre London ran for seven yards, and later in the drive, London picked up 9 yards on a reception to put Pittsburgh at the Houston 28. On third-and-three, Pittsburgh got a first down on a six-yard reception by Tre Walker. On third-and-ten, Lee scrambled for seven yards to reach the Houston 4. Ahmed came out and knocked through the field goal to cut the lead to 10-6 with under two minutes to go in the half.

Houston wasn’t done though, as Thorson hit Zuber for 44 yards to get into Pittsburgh territory. However, they couldn’t advance past the Pittsburgh 30 and Vogel missed a 47-yard field goal with 36 seconds left in the first half. The Maulers didn’t do much with the final possession and they went into the half trailing 10-6.

Houston opened the second half with the ball, They opened the half with an 11-yard completion to WR Tyler Palka. A run by Thompson picked up another first down, and on third-and-ten Thompson gained enough to set up a fourth-and-one, where he gained five yards to the Pittsburgh 18 for a first down. Thompson picked up another three yards on first-and-goal and Houston was set up at the Pittsburgh 4. On third-and-goal, a pass interference call against the Maulers in the end zone gave the Gamblers a new set of downs, and they took advantage as Thorson ran in for a touchdown. The extra-point was good and Houston went up 17-6 with under eight minutes left in the third quarter. Pittsburgh picked up a first down on a 17-yard third-down completion to Walker. An unnecessary roughness penalty gave Pittsburgh another 15 yards, and Pittsburgh was in business at the Houston 31. A 16-yard reception by Walker brought Pittsburgh into the red zone, and on third-and-four from the Houston 6, London was stopped for a one-yard game. Ahmed hit a 24-yard field goal and the Maulers made it a 17-9 game with 2:51 left in the third quarter.

The next Gamblers’ drive opened with a roughing the passer penalty against DL Ethan Westbrooks that gave the Gamblers a free 15 yards. Thorson picked up a first down on a third-and-nine scramble to get to the Pittsburgh 47 and move into Pittsburgh territory for the final play of the third quarter. On second-and-ten, CB Keith Gipson Jr. intercepted Thorson and Pittsburgh took possession back over at their own 32-yard line.

The Maulers failed to capitalize on the turnover, going three-and-out after a failed screen play on third-and-seven. Houston had a three-and-out of their own on the next possession, and Pittsburgh took over at their own 34 with 11:02 to go. On the second play of the drive, Lee’s pass was intercepted by DB William Likely III and the Gamblers got the ball at the Pittsburgh 36. Houston had to punt after they lost four yards on the drive, and Pittsburgh took over in their own territory at their 24.

The Maulers went three-and-out though, and had to punt away. On third-and-nine, Thorson was sacked and fumbled and the Maulers recovered. Two plays later, Lee hit Gaither for a 30-yard touchdown reception. London’s two-point attempt was incomplete, and the Maulers trailed 17-15 with under seven minutes to go. On third-and-three, Thorson completed a 37-yard pass and Houston was in Pittsburgh territory. Houston wasn’t able to pick up another first down and kicked a 44-yard field goal to give them a 20-15 lead with 3:34 left in the game.

Pittsburgh will look to capitalize off the positive momentum next Sunday when they play the New Orleans Breakers at 12 p.m.