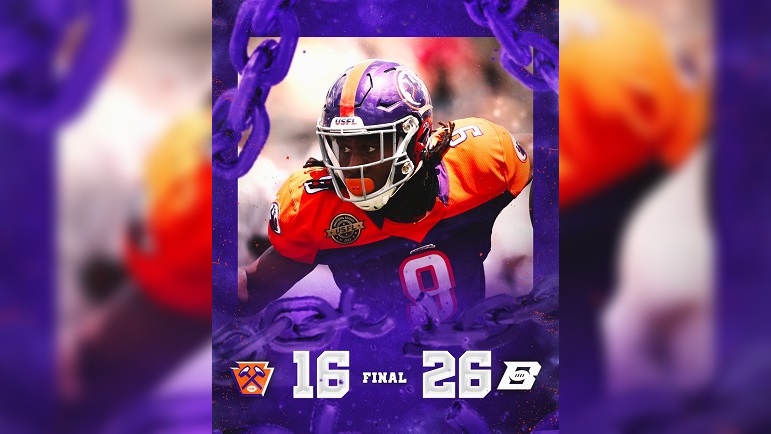 The Pittsburgh Maulers took on the undefeated Birmingham Stallions on Sunday afternoon, but were unable to give them their first loss of the season, losing 26-16 in a hard-fought contest.

The Maulers opened with possession but went three-and-out on their opening drive. On third-and-one, the Stallions got just enough for a first down on a run by RB Bo Scarbrough. Two plays later, QB J’Mar Smith hit WR Victor Bolden Jr. for a 53 yard gain that brought Birmingham to the Pittsburgh 14. Scarbrough was short of the first on a third-and-eight run, so the Stallions settled for a 27-yard Brandon Aubrey field goal to take a 3-0 lead with 8:12 left in the first quarter.

On second-and-ten, Smith saved a fumble from a bad snap but then was sacked for a loss of eight by DE Nasir Player. An incomplete pass on third down led to another three-and-out for the Stallions as the Maulers defense stepped up early. They started their next possession with the ball on their own 48, and on second-and-six, London ran for 19 yards and a first down. The Maulers failed to pick up another first on the drive, but Ahmed made a 43-yard field goal and Pittsburgh took a 10-3 lead with just over eight minutes left in the second quarter.

On third-and-six for the Stallions on their next drive, Smith threw short of the sticks to WR Michael Dereus but Dereus broke through a tackle and was able to pick up ten yards and a first down. A 13-yard run on third-and-three by Scarbrough gave the Stallions another first and moved them to the Pittsburgh 35. On third-and-seven, Smith and Dereus hooked up for another first down and Birmingham was in business at the Pittsburgh 24. Scarbrough lost five yards on first down, but an 11-yard scramble by Smith brought up third-and-four. Smith went deep to Dereus in the end zone, but it was incomplete and the Stallions settled for another Aubrey field goal. With 2:08 left in the first half, the Maulers led 10-6.

Pittsburgh went conservative, running the ball on six straight plays and not using either of their two timeouts, seemingly content to run the clock out and not even bother to try and get more points despite having 1:55 left in the half. The Maulers went into the half leading 10-6, largely on the strength of London’s 97 yards.

The Stallions had possession to open the second half, and on their first play of the drive Scarbrough broke free for an 18-yard gain. On third-and-five two plays later, Smith’s pass was batted down and the Stallions went into punt formation. They faked the punt, and FB Bobby Holly ran for a 52-yard touchdown. Aubrey’s extra-point was good and the Stallions took a 13-10 lead.

After a run for a first down by RB Garrett Groshek, the Maulers drive stalled out and they had to punt. Max Duffy’s punt went for a touchback, and Birmingham got the ball back with a 13-10 lead with 9:10 left in the third quarter. On third-and-five, Birmingham’s pass was incomplete but CB Shakur Brown got flagged for a defensive pass interference penalty which extended the Stallions’ drive. On third-and-ten, Smith threw over the middle but the pass was deflected and intercepted by S Bryce Torneden, who took it back to the Birmingham 21, putting the Maulers in prime position to score.

PICKED‼️@BryceTorneden comes down with it 🙌

On third-and-eight, Lee was sacked for a loss of five and the Maulers brought out Ahmed, who knocked through a 43-yard field goal to tie the game at 13-13 with 4:10 left in the third quarter.

Former Steelers RB Tony Brooks-James returned the kickoff to the Birmingham 46-yard line, and two plays later the Stallions had a first down after runs of seven and four yards by RB Bo Scarbrough. Brooks-James ran for 18 yards on the next play to move Birmingham to the Pittsburgh 25. The Stallions couldn’t gain any more yards the rest of the drive, but Aubrey hit a 43-yard field goal to give Birmingham a 16-13 lead. Pittsburgh went three-and-out, and Birmingham took over with 14:03 left in the game. Smith threw a perfect pass on first down, but WR Jeffrey Thomas dropped it. Two straight Scarbrough runs did give the Stallions a first down, and they picked up another on Smith’s first completion of the half to WR Sage Surratt which went for ten yards. On third-and-three, the Stallions went play action and hit Surratt wide open over the top for a 36-yard gain down to the Pittsburgh 13. Three plays later, RB CJ Marable ran for a five-yard touchdown, and the Stallions took a 23-13 lead with 8:33 left after Aubrey’s extra-point. An 18-yard completion to WR Jalen McCleskey brought Pittsburgh to the Birmingham 44, and on third-and-eight later in the drive, Groshek ran for four yards. Ahmed came out for a 58-yard field goal and made it, which put the Maulers back within a touchdown at 23-16 with 6:44 left.

The 58-yard FG is good for Ramiz Ahmed 🙌

Brooks-James ran for 17 yards on the opening play of the Stallions drive, but they couldn’t get another first down on the drive and punted with under five minutes left in the game. Vad Lee got benched with the game on the line for the Maulers, and QB Roland Rivers came in. On third-and-nine, Rivers completed a pass to Hennie to set up fourth-and-three from the Pittsburgh 28. Rivers was incomplete to Hennie, and the Stallions took over in plus territory. Birmingham didn’t pick up a first down. From 45 yards out, Aubrey just sneaked his field goal through the uprights to take a 26-16 lead with two minutes left.

Hennie returned the kickoff to the Pittsburgh 47, but Rivers threw three straight incompletions. On fourth down, Rivers was getting dragged down for a sack but managed to get rid of it and completed a pass to WR Bailey Gaither for a first down. Another completion to Gaither gained eight, and the Maulers spiked it before bringing Ahmed out for a 53-yard try. His attempt hit off the left upright and Birmingham clinched the 26-16 win. Smith kneeled out the clock and the game was over.

Pittsburgh falls to 1-6 on the season. They resume their season on Friday against the New Jersey Generals at 8:00 p.m.