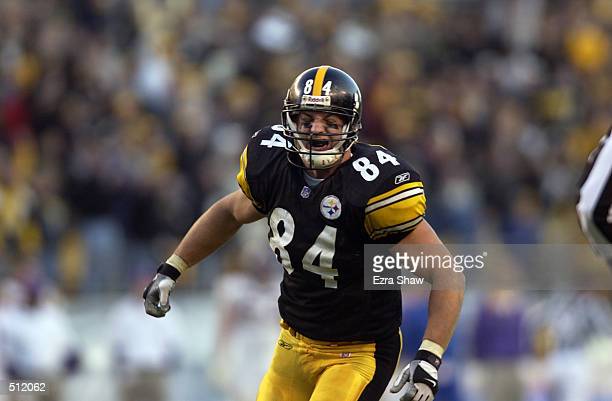 As we have done for several years to bide our time during the offseason, we’re looking back on Pittsburgh Steelers you may have forgotten… or not remembered in the first place. Our “blast from the past” series, with a new, dumb name, highlighting players who have long hung up their cleats.

The first “Let’s Remember” article of the offseason and I tried to go with a slightly less obscure, more nostalgic-filled choice in Tuman. He just missed the cutoff of the “rank every Kevin Colbert pick” study, the final class led by Tom Donahoe before Colbert became the guy. A fifth-round pick out of Michigan, he had a heck of a Steelers’ career in terms of longevity, spending nine years with the team.

Consider this. Of Steelers’ fifth-round picks over the last 30 years, only William Gay has played more games in a Steelers’ uniform than Tuman’s 120.

Tuman functioned largely as the backup/blocker role, starting less than half of those 120 games and he averaged a reception about only once every three games. He played at a time when the Steelers were built around the ground game and their #2 tight end wasn’t going to see the ball a lot. His job was to open holes for Jerome Bettis, Willie Parker, and company.

Even Ben Roethlisberger’s presence didn’t change Tuman’s luck much. Officially, Tuman caught 18 passes from him, though four of them found the end zone. Three of those came in 2004, Roethlisberger’s rookie year.

Because the Internet is an amazing thing, someone’s actually taken the time to compile all seven of Tuman’s touchdowns. Why, I’m not quite sure, but it’s a quirky YouTube channel that can send you down the rabbit hole – recently earning Jon Bois’ endorsement – so the video tracks with the channel’s mantra. The first one is the best one, catching a TD pass from Jerome Bettis against Tampa Bay in 2001 (and as a reader pointed out, again in 2004!)

Tuman won one ring with the Steelers, Super Bowl XL over Seattle, and in his final NFL season, signed with the Arizona Cardinals, playing against the Steelers in that year’s Super Bowl (though he was inactive for most of the season, including the Big Game).

But put stats aside. Tuman is a fifth-round pick who played nine years in the league, made a decent amount of money, and owns a Super Bowl ring. That’s a rock-solid NFL career. And he’s making a tiny bit of Steelers Depot history. This is his first article that’s ever barred his name in a headline, though a 2018 flashback by Dave Bryan centered around him, too.

In his post-NFL days, Tuman did a little bit of coaching at North Allegheny High School. The Tuman kids are tearing it up on the volleyball court. Son Canyon is at Penn State while daughter Mia is one of Western PA’s top volleyball prospects, attending Ohio State next year. That runs in the family with their mother playing for the US National Team in the late 90s.

Jerame Tuman, your blast from the past.