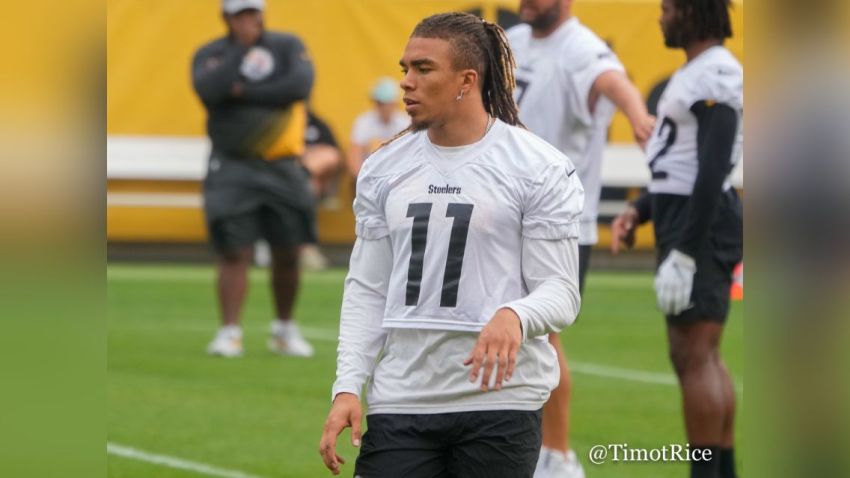 When the Pittsburgh Steelers selected Chase Claypool in the second round of the 2020 NFL Draft, he was immediately given the nickname “Mapletron”, in reference to his Canadian roots as well as his body type, which at 6-foot-4 and 238 pounds, was eerily similar to that of 6-foot-5, 237-pound Hall Of Fame wide receiver Calvin “Megatron” Johnson. The two are in the NFL Combine history books together, as well as the only sets of receivers over 6-foot-4 and 235 pounds to run a sub-4.45 in the 40, with Johnson’s time of 4.35 and Claypool’s 4.42.

Claypool wasted no time backing up all his hype, as his coming-out party happened in a victory over the Eagles his rookie year, where he posted seven catches for 110 yards, three carries for six yards and four total touchdowns. His stat line his rookie year was very impressive, with 62 catches for 873 yards and 11 total touchdowns, and it was very similar this past season, with a drop-off in the touchdown department.

However, this past season, he displayed plenty of diva-like tendencies that got the team into some serious dilemmas, none of which more serious than the Thursday night game in December versus the Minnesota Vikings. In the midst of a late-game rally, Claypool caught a short pass to convert on fourth down, but chose to celebrate a first down with around 40 seconds left, instead of rushing back to the huddle for the next play. The team had a chance in the waning seconds of the game, but Claypool’s antics likely cost them an opportunity at another play or two.

Heading into year three, the team definitely wants to cut short the prima donna antics that have been seen in the past with recent stars like Antonio Brown, JuJu Smith-Schuster, or Le’Veon Bell. And Claypool knows this, especially with two rookie draft picks at the position which undoubtedly look up to him.

“When I first went to Notre Dame, I wasn’t that guy; became that guy. Same thing here,” Claypool said speaking to reporters via the Steelers’ website. “I think it’s the first time on the Steelers where I felt like my voice is being actively heard. And I am taking that seriously.”

With an offense in transition that’s ushering in a new quarterback, the leadership of the skill position players will play a pivotal role in the offense’s success. This will apply a lot more in the wide receiver room, where as I noted before, the team invested heavily at the position, with Georgia’s George Pickens in the second round and Memphis’ Calvin Austin III in Round 4. Perhaps it could be a premonition of things to come, with Pro Bowler Diontae Johnson in a contract battle and Claypool’s immaturity showing itself last year. However, a second contract with the team shouldn’t be out of the question, and Claypool seems to be saying all the right things facing a critical season in his career.

“I’m trying to try to help the young guys, because I was there last year and two years ago. Everyone knows Pickens is a dog and then Calvin’s super fast and he’s dynamic. So it’s exciting to see them play and we’ll have fun out there.”