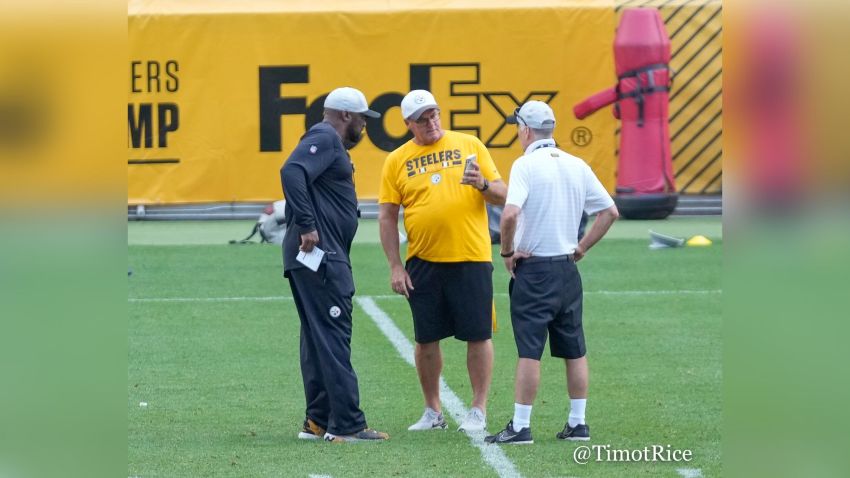 Jason La Canfora is reporting, well, not a whole lot. Like most everyone else, he’s in the dark as to who Kevin Colbert’s GM replacement will be. La Canfora joined 93.7 The Fan Friday to give an update on the team’s search, but is playing the waiting game with the rest of Steelers’ Nation.

“I don’t know how to handicap this right now,” he told the show. “I don’t know that the Steelers going all the way up to the tippy top and ownership knew exactly sort of how this was going to play out. I get the sense it’s been somewhat organic. I don’t know that anyone there would’ve said, ‘okay, by this date, we think we’ll be down to this many people. And by that date, we think we’ll be down to that many people, and then we’ll make a decision.’

“It was clear [the hire] was coming on the other side of the draft. It was clear that they were being very sort of meticulous and judicious about this and that they didn’t feel as if in order for us to be at maximum operation, we need to have this guy or gal or whomever in place by this date.”

Hey, at least he’s honest. Everyone, ourselves included, is guessing as to who the team will pick. The list has appeared to have narrowed down to six names. Two internal options in Brandon Hunt and Omar Khan and four external options in Doug Whaley, Andy Weidl, John Spytek, and Ryan Cowden. Whaley worked with the Steelers for years, while Weidl interned with the team in the late 90s. All six of those men who received second interviews and presumably make up the finalists list.

Where the Steelers go from here is unclear. For years, Brandon Hunt was viewed as Colbert’s successor. But Pittsburgh has cast a wide net in their GM search. Whether that’s due diligence for an organization that hasn’t had to make a GM hire in 22 years or if they don’t believe Hunt is the guy is anyone’s guess.

“Personally, I’m a little surprised it’s gone to this depth just because of knowing what they have in-house and knowing how well some of those individuals are thought of and how many cases they’ve sort of been groomed for expanding roles, whatever that title might be.”

Hunt has been with the team since 2010 and had a brief stint with them in the mid-2000s. Khan was been in Pittsburgh since 2001 and has had several interviews for other GM jobs over the years, though he never came out on top. Should the team go with an external hire, it’s hard to see Hunt and probably Khan sticking around with the team for much longer. They’ll feel snubbed by being passed over for an outsider and both could quickly find a job elsewhere. Hunt has already interviewed for three outside positions this offseason with one, the Bills’ assistant GM job, still vacant. Some around the league if Khan doesn’t become a NFL GM, he’ll become a Team President or function in some other CEO-type of role.

In the interview, La Canfora speculated the team could have multiple promotions with two people carrying different titles with one of the GM candidates hired underneath them. But that is idle speculation and it’s not fresh news either.

For what it’s worth, the Steelers’ last two GM hires have been Pittsburgh guys. Kevin Colbert grew up in Western PA and attended North Catholic before going to Robert Morris University. Tom Donahoe is from the Mt. Lebanon area. Hunt was born in California but grew up in Pittsburgh, playing his college ball at IUP, while Weidl is a Pittsburgh native. Hunt and Weidl have also followed similar career arcs as Colbert did before being hired by the Steelers in 2000.

Kevin Colbert’s contract runs through the end of the month and it would make sense for the team to have hired his replacement by then, though they are not required to do so. A new GM hire could also shake up the Steelers’ long-tenured scouting staff and bring even more change to an organization that’s seen plenty of it this offseason.