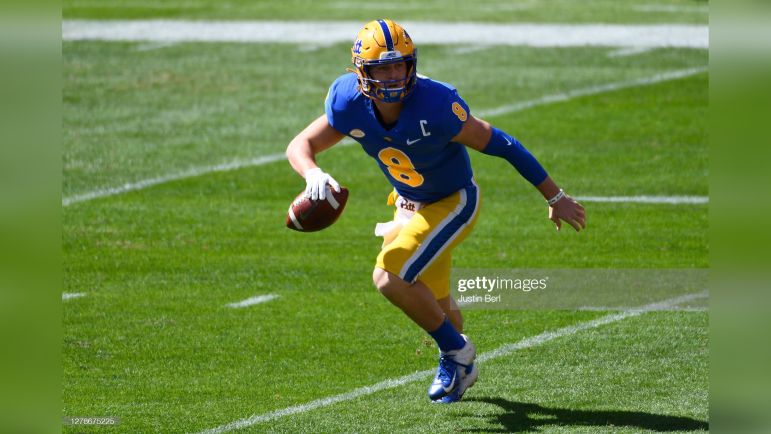 Does he fit the profile, though? According to his quarterback coach, Tony Racioppi, he does…not that there’s any bias there or anything. But Racioppi hopped on SiriusXM yesterday on the Mad Dog Sports Radio show to talk about his student.

“Really, what’s been added to that list over the last four, five, six years is the ability to move. Nobody wants a statue guy anymore, because everybody’s just too athletic”, he said about what teams are looking for in quarterbacks today. “He could do those things. I tell people all the time, the two things people don’t realize he is, is, A, how really athletic he really is, and then how good his arm is”.

Racioppi went on to draw comparisons between Pickett and the Dallas Cowboys’ Dak Prescott, including the sorts of numbers they put up at the NFL Scouting Combine in their respective years, and suggested that Pickett’s athleticism is on par—but he didn’t have to utilize it as much this past year.

“He can move, and he’s gonna have to move. And he’s done it”, he said. “I think the biggest jump he saw this year was the fact he would sit in there and go through his progressions this year when he didn’t have to go. And then if he had to go, he could extend plays, either making plays downfield or if people dropped in coverage or if they played man coverage, he could take off and get first downs”.

Pickett and Prescott actually did put up very similar numbers at the Combine, which you can see for yourself through the links provided, with the new Steelers quarterback timing slightly better, though Prescott has the longer arms and significantly bigger hands (Prescott has big hands in general—not just in comparison to Pickett).

Although he has 25 rushing touchdowns in his career, Prescott has never been a ‘running quarterback’. He’s only rushed for 300 or more yards in a season twice, for example. Obviously, the Steelers aren’t going to expect Pickett to run like Lamar Jackson, either.

It’s more about buying time, extending plays, avoiding negative plays when the protection doesn’t hold up or the receivers struggle to get open. That’s essential today with the incredible athleticism of today’s defenders, both on the edge and in the secondary.