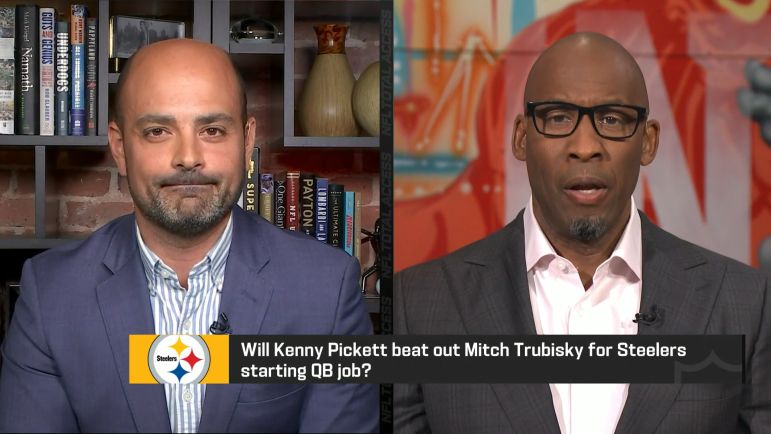 What is the Pittsburgh Steelers’ offense? How much do we know about what it will actually look like when they take the field this year? We can surmise and conjecture based on comments made, what we’ve seen last year, what the quarterbacks’ skillsets favor, and also what offensive coordinator Matt Canada did in college, but ultimately, we won’t find out until the games unfold in September.

During an AFC North discussion on the NFL Network between Mike Garafolo and Bucky Brooks, the two addressed the question of whether or not Steelers rookie quarterback Kenny Pickett has a chance to start the season. Garafolo seemed more strongly convinced that it would be Mitch Trubisky, largely because he fits the offense.

“I do know that a lot of the stuff that Matt Canada wanted to run over the last year or so with Ben Roethlisberger at quarterback, he couldn’t”, he said. “He either had to tailor it to what Roethlisberger wanted to do or scrap it completely, and I know that they’re excited about all these things that they’ve had in their back pocket that they haven’t unveiled. A lot of unscouted looks that they’re gonna be showing teams”.

Brooks talked about the possibility of Pickett being able to start because of his general pro-readiness and how his skillset fits into Canada’s scheme, but Garafolo pointed out that the same could be said of Trubisky, and he comes with years of starting experience.

But they also told him when they signed him that they would draft Pickett if he were on the board when they selected, yet that still doesn’t mean that they expect Pickett to start from day one. That’s a possibility, of course, but I do think they genuinely believe that they have three quarterbacks, including Mason Rudolph, who could start in September and run their offense.

The question that I come away with from Garafolo’s comments, though, is about the offense itself. How much of this ‘unscouted’ stuff is out there? How visually recognizably different will this offense actually be?

Realistically, they could probably have a more expansive repertoire with a veteran like Trubisky starting than with Pickett, no matter how ‘pro-ready’ he’s supposed to be. He’s still somebody who’s neve played in this league, nor against any of these players. Trubisky knows what it’s like to start against the Baltimore Ravens defense, for example. Pickett does not.