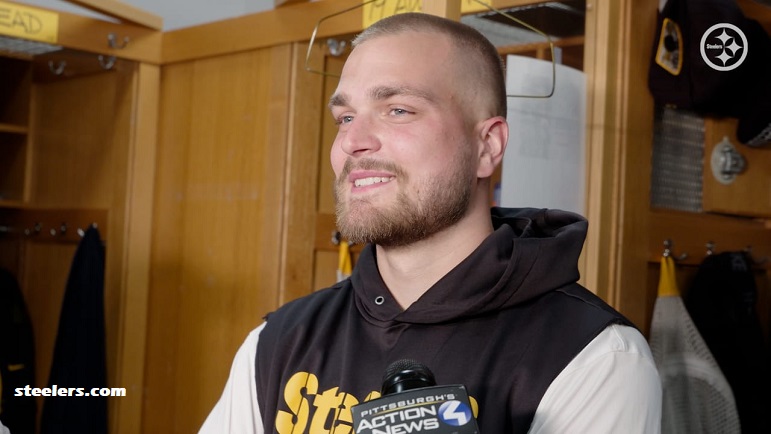 Globally speaking, there wasn’t much to not like about the rookie 2021 season that Pittsburgh Steelers tight end Pat Freiermuth had. After all, the Steelers’ second round draft pick last year out of Penn State did finish his rookie season ranked third on the team in both receptions and receiving yards and second in touchdown receptions with seven. Even so, Freiermuth knows that he has room for improvement when it comes to his second NFL season.

Specifically, Freiermuth said on Wednesday after the team’s OTA practice that he’d like to see his average yards per catch go up in 2022.

“I think my yards per average was atrocious, in my opinion,” Freiermuth said on Wednesday about his 2021 rookie season. “I mean, 8.2 yards [per reception], that’s pretty bad on my end. So, I think that obviously if I have 60 catches, I should be up more in the range of 800, 900 yards. So, I think I definitely need to get that higher and maybe we can push the ball down the field this year.”

Freiermuth certainly has self-scouted himself and the Steelers offense as well. What he said on Wednesday matches what I wrote about him earlier in the day when it comes to expectations for him in 2022. So, how bad was Freiermuth’s yards per reception stat in 2021? well, of the 89 non-running backs that caught 40 or more passes in 2021, only Arizona Cardinals wide receiver Rondale Moore (8.1) had a lower yards per reception stat than Freiermuth had (8.3).

In case you need reminding, Freiermuth averaged 12.9 yards per catch on 92 total receptions during his college career at Penn State. His lowest average per reception in a single college season was 11.8 yards on 43 total catches in 2019.

In Freiermuth’s defense, his average depth of target in 2021 was a minuscule 5.3 yards past the line of scrimmage. He averaged 4.1 yards after the catch in 2021 so that’s encouraging from a big picture standpoint. In short, and as Freiermuth eloquently put it on Wednesday, hopefully the Steelers offense can push the football down the field more in 2022 as part of them having new quarterbacks on the team and a rebuilt offensive line.

At a minimum, Freiermuth needs to average about 11.5 yards per catch in 2022 and if manages to do so, and if he manages to catch at least 65 passes, he should have at least around 750 receiving yards, which would be roughly 250 more than he had as a rookie in 2021.