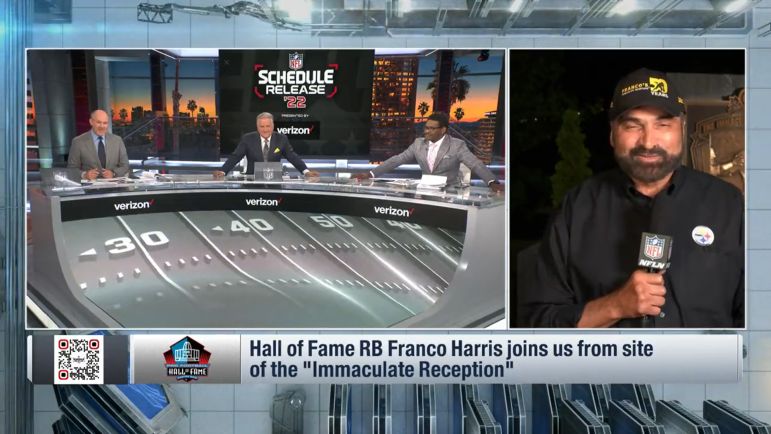 The NFL schedule is not made by robots—or, at least, it’s not curated by them. They know that there are certain things that they want to align, and they use the aid of technology to figure out how to work out the rest around it.

One thing that the league wanted to coordinate was to get the Pittsburgh Steelers’ game against the Las Vegas Raiders as near as possible to the date of the 50th anniversary of the two teams’ playoff game on December 23. It was the date of the Immaculate Reception, the most iconic play in the history of the sport.

Steelers Hall of Fame running back Franco Harris was, of course, at the center of that play—though not by design—and you can bet that he is going to be there as part of the celebrations in honor of that legacy. With the schedule release last night, he hopped onto the NFL Network to talk about the alignment of that game on the schedule.

“It’s hard to believe, 50 years ago. Wow. That was a heck of a moment for us”, Harris said, “and I just want to thank the NFL for lining up everything to make this happen. 50 years ago, we played on a Saturday, and this year, it’ll be played on a Saturday, 50 years later. So, thank you NFL for making that happen. That is exciting. We’re so excited here in Pittsburgh, and that’s gonna be one heck of a day”.

The Steelers are playing the Raiders this year because both teams finished second in their respective divisions in the same conference, thus receiving the second-place schedule. They are not playing the AFC West this season, but rather the AFC East, so were it not for that final regular-season game last year, this game wouldn’t even be happening.

This year’s game will take place in Week 16 of the regular season, on Christmas Eve, at 8:15 PM in Pittsburgh, a primetime event. The NFL didn’t even play 16 games yet in 1972 when the original game occurred.

I imagine I don’t have to recap for you exactly what the Immaculate Reception was. It’s such an embedded moment of American culture at large that even non-football fans stand a good chance of being at least cursorily familiar with it.

Many attribute to that moment the spark of the dynasty that would follow, however. The 1972 season was the first year that the Steelers ever even made a true postseason schedule—they played one ‘playoff’ game before World War II, but it was only a play-in game due to two teams finishing with the same record.

And they lost that game. The Steelers won this one. They lost the following week, and didn’t make it out of the opening round the year after that, but then they went on the greatest championship run in NFL history, winning four of the next six Super Bowls. That immaculate moment back in 1972 showed them how to win.