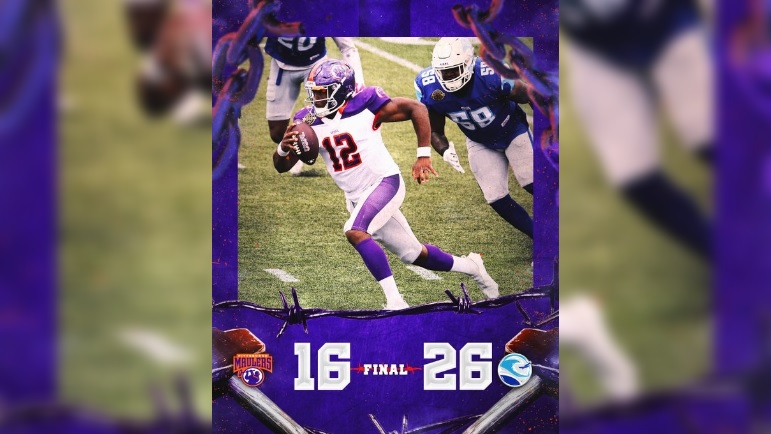 The Pittsburgh Maulers faced off against the New Orleans Breakers’ and USFL leading passer QB Kyle Sloter on Sunday afternoon at Protective Stadium in Birmingham, Ala. Turnovers doomed Pittsburgh, who lost 26-16 to New Orleans.

The Breakers opened the game with possession, and on third down the Maulers stopped WR Taywan Taylor just short of the sticks to force a three-and-out. The Maulers took over possession at the Pittsburgh 36 after a 17-yard return by WR Isiah Hennie. On third-and-two, QB Vad Lee was incomplete down the sidelines to WR Tre Walker and the Maulers had to punt. P Max Duffy pinned the Breakers’ inside their five at their own four-yard line. RB Anthony Jones ran 14 yards for a first down on third-and-two, and the Breakers moved to their 38 after a four-yard run by Jones on second-and-three. Sloter then got it done with his legs, scrambling for 12 yards on third-and-eight to move the Breakers into Pittsburgh territory at their 48. On third-and-nine, Sloter threw short of the first down to WR Jonathan Adams which set up fourth-and-four. New Orleans went for it, and Sloter found WR Johnnie Dixon open in the middle of the field for ten yards and a first down.

A second-and-ten slip screen to Jones gave New Orleans another first down and moved them into the red zone. On third-and-one, Jones ran for nine yards to the Pittsburgh 1, and he finished the drive off on the next play. It was an 18 play, 94 yard drive that lasted over nine minutes for New Orleans that was capped off by the Jones touchdown and Taylor Bertolet extra-point to put the Breakers up 7-0.

The first play of the second quarter was a third-and-nine for Pittsburgh following a false start penalty. Lee was sacked for a loss of 9, but the Breakers were also forced to punt on their next possession. P Matt White’s punt traveled 35 yards and Pittsburgh began their next possession at their own 12. They went three-and-out after Lee was incomplete to Walker on third-and-six. The Breakers started at their own 42 following a 42-yard punt by Duffy.

The Breakers couldn’t take advantage of the good field position though, as DT Ethan Westbrooks sacked Sloter on third-and-ten and New Orleans had to punt. The Maulers picked up two first downs on the drive and advanced to their own 44, but they lost five yards on the next two plays and Lee could only pick up one yard on a third-and-15 scramble. Following that play, Walker and CB Keith Washington II got into a fight, but the penalties offset and cancelled the play out. Both players remained in the game despite Washington II throwing punches. On fourth-and-16, Lee was incomplete deep down the field and the Maulers again had to punt.

After a penalty against LB Vontae Diggs cost New Orleans 15 yards, the Breakers would begin their drive at their own 21 with 4:31 to go in the first half. After two first downs, New Orleans lost three yards on first down and another yard on second down which brought up a third-and-14 with 1:58 left in the half. Sloter got sacked for a one-yard loss, and the Maulers would have a chance to score with just under 1:50 left in the first half. A 16-yard completion to TE Artavyious Lynn moved the Maulers to their own 48, but back-to-back incompletions set up third down with 1:14 to go. Lee’s pass was intercepted by CB Ike Brown, and the Breakers took over with good field position and a chance to extend their 7-0 lead. Sloter hit Taylor for a 15 yard gain and the Breakers were in business with a first down at the Pittsburgh 35. Sloter’s pass on third-and-nine was nearly picked off by the Maulers, but a roughing the passer penalty ended up giving New Orleans a first down anyway. With 27 seconds left in the half, the Breakers had a first-and-ten at the Pittsburgh 19. On second-and-two, Dixon got New Orleans down to the Pittsburgh four after a seven-yard completion. Back-to-back incompletions set up third-and-goal, and with five seconds left, the Breakers settled for a field goal. Bertolet hit the 22-yard try and the Breakers took a 10-0 lead into the half.

On the first play of the second half, RB Madre London ran for a first down for Pittsburgh. On third-and-11, Lee hit Walker for a first down. It was Walker’s first reception of the game and it went for 18 yards. On third-and-two from the New Orleans 23, RB Garrett Groshek was stopped for a loss of one and on fourth-and-two the Maulers had to settle for a field goal. The snap went high on the field goal, and the Breakers recovered the fumble but were called for a neutral zone infraction. The Maulers were gifted a first down after a play that couldn’t have gone much worse. Pittsburgh didn’t take advantage though, running the ball on second and long and third and long. Ahmed’s 37-yard field goal was good, and the Maulers cut the lead to 10-3 with 6:42 left in the third quarter.

The Breakers were able to pick up a few first downs on the ground after Ahmed’s kickoff went out of bounds, and New Orleans had first-and-goal from the Pittsburgh six after an 11-yard run by Jones. On second-and-goal, RB Jordan Ellis ran for a touchdown. New Orleans ran ten plays on the drive and each play was a run. Bertolet’s extra-point was good and the Breakers went up 17-3 with 1:30 left in the third quarter.

Pittsburgh picked up a first down on their next drive when Lee hit Hennie for a 12-yard gain. On second-and-18 later in the drive, they picked up eight to set up third-and-ten. The third-and-ten completion to Hennie was short, but a high hit against Hennie gave the Maulers an extra 15 yards. On second-and-eight from the New Orleans 23, Lee had WR Bailey Gaither wide open in the end zone but he just overthrew him. On third-and-eight, Lee hit Hennie for a first down. Hennie was brought down by his facemask, and the Maulers had first-and-goal on the New Orleans 4. After a loss of four yards, Lee threw a pick-six to Ike Brown (his second interception of the game). Bertolet’s extra-point was no good, but the Breakers took a 23-3 lead with 10:47 to go.

Bertolet’s kickoff went out of bounds, and a pass interference penalty gave the Maulers the ball on the New Orleans 35. On third-and-ten, Walker picked up the first down after catching a tipped ball for a gain of 13. After two incompletions, Lee redeemed himself by finding Gaither in the end zone for a touchdown. Ahmed missed the extra point off the upright, and the Maulers trailed 23-9 with 9:47 to go.

The Breakers went three-and-out, and Pittsburgh took over at their own 37 with 8:12 left down two scores. On third-and-ten, Lee and Hennie connected again for a 35-yard gain that brought Pittsburgh to the New Orleans 28. On third-and-six from the New Orleans 14, WR DelVon Hardaway made a diving grab to give Pittsburgh a first down. A run by Groshek went for no gain, and then Lee didn’t pick up anything on a designed run. On third-and-goal, Lee scrambled and ran it in for a touchdown to cut the New Orleans lead to 23-15. Ahmed came out for the extra-point and put it right through the uprights. Just like that, it was 23-16 and the Maulers were within one score with 5:08 left to go.

With the Breakers needing to get something going to hold off the Maulers momentum, Sloter found Adams for a first down on the opening play of the drive. Ellis ran for four yards and then five yards on the next two plays to make it third-and-one. Ellis fought for the first down and picked up two yards to give the Breakers a first, and an unnecessary roughness call against the Maulers gave New Orleans another 15 yards. The Breakers continued gaining yards on the ground, as Anthony Jones ran for 9 yards and a first down to move New Orleans to the Pittsburgh 29. On second-and-four later in the drive, Jones was stopped for a two-yard loss and New Orleans faced a third-and-six. Jones ran but was stopped short of the line to gain. Bertolet came out to try and seal the game with a 38-yard field goal. His kick was good, and the Breakers essentially locked up the win with a 26-16 lead with 35 seconds to play.

The Maulers couldn’t score with the remaining time left, and lost 26-16 to move to 1-5. They will look to win their second game of the season next week against the undefeated Birmingham Stallions at 2:00 p.m.