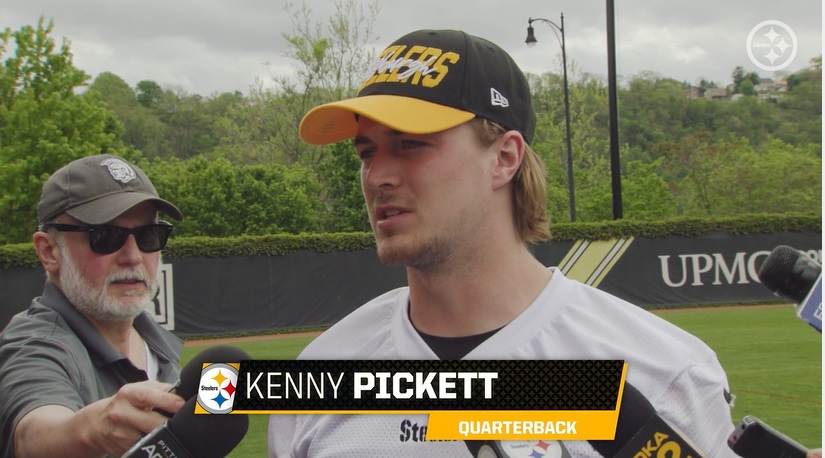 Though new Pittsburgh Steelers’ quarterback Kenny Pickett has a perceived leg up on the competition entering the offseason with some familiarity from his time at Pittsburgh with the Matt Canada offensive scheme, the rookie quarterback downplayed some of those advantages Friday following his first minicamp session with the Steelers on the South Side.

Speaking with reporters wearing Steelers’ gear for the first time in a practice setting, Pickett stated that there’s still a lot to learn regarding the offensive scheme, and that he’s focusing on learning the system as a whole before even beginning to think about any sort of quarterback competition with free agent signee Mitch Trubisky and veteran quarterback Mason Rudolph.

Prior to landing with the Steelers in the first round of the 2022 NFL Draft at No. 20 overall, Pickett was recruited to Pittsburgh by Canada, before the high-profile offensive coordinator bolted from the Panthers following a record-setting season to head to LSU, where he was ultimately a little more than a year after he was hired.

After Canada left for LSU, the Panthers elevated Shawn Watson into the offensive coordinator role. Watson, according to Pickett, kept some of the formations and some terminology from Canada’s scheme, which allowed Pickett to recall some of that during the Steelers’ offensive install session Friday on the South Side.

“By the same, I don’t mean identical,” Pickett said regarding the system he ran in college at Pittsburgh compared to the Steelers’ system, according to video via Steelers.com. “The formations that Coach Canada had, Coach Watson inherited and kept a little bit the same. That’s as far as the extent of that. So I had some sort of recall of that, which really helped me with they install.”

While he was able to recall some of the formations and terminology for 2017 as a Panther, Pickett still said there’s a ton of work to do here in the coming days during the rookie minicamp, which will have him back in his hotel room diving into the playbook on his iPad trying to soak up all the knowledge that he can regarding the new scheme he’ll be running with the Steelers.

“I can’t give you hours per day, it’s just until I feel comfortable with it [the offense],” Pickett said. “It’s studying the offense here and then when we get let out, heading back to the hotel and getting my iPad out and, like I said, just doing as much as I can to feel good out here [on the field] so I can play fast. That’s the number one key.”

Once Pickett picks up the offense and is able to play fast, he’ll thrust himself right into the quarterback discussion regarding the Week 1 starter against Trubisky and Rudolph. There’s a very good chance the Steelers ultimately decide to start the Pickett era right away, assuming he looks the part in training camp and in preseason action.

Pickett isn’t worried about that though, answering in veteran fashion, stating he has to learn all that he can to make sure he’s prepared, rather than focusing on what the competition will be like.

“I’m just learning what I have to do. I have no shot if I don’t know what I’m doing,” Pickett said. “I’ve just got to dedicate myself to the playbook and learning every detail I possibly can to help us have a smooth operation out here.”