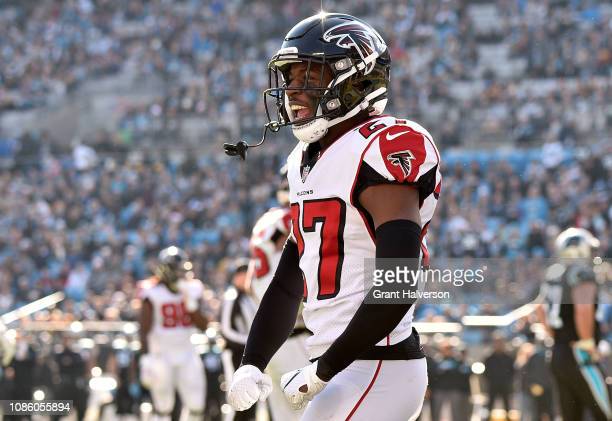 Shortly after the 2022 NFL Draft had concluded and news regarding the UDFA signings started to come out Saturday evening, news broke that the Pittsburgh Steelers were signing DB Damontae Kazee on a one-year deal, per ESPN’s Jeremy Fowler.

It was widely speculated that Pittsburgh would add another safety in the draft, even after the re-signing of S Terrell Edmunds. Those thoughts were reinforced by owner Art Rooney II who said that the team was looking to address WR, DL, and S at some point going forward after the Kenny Pickett selection on Thursday night. The Steelers selected WR George Pickens and DL DeMarvin Leal on Day Two, setting up the ideal scenario to take a safety to kick off Day Three.

However, Pittsburgh opted to take another WR, Calvin Austin out of Memphis with their fourth-round selection at #138 overall. Pittsburgh wasn’t looking to take another WR, but WR Coach Frisman Jackson told the media that Austin was the highest-graded player on the board at the time and didn’t want to pass up the value, thus making him a Pittsburgh Steeler. This likely to Pittsburgh bypassing on the safety position entirely for the rest of the draft as the quality of options really dried up later on Day Three.

However, as we have become accustomed to over the years, GM Kevin Colbert always seems to have a backup plan and likely had Kazee on the phone shortly after the draft concluded. It was rumored earlier that Pittsburgh was interested in Kazee, along with Edmunds and Tyrann Mathieu as potential free agent safeties out on the market. They locked up Edmunds to negate the need to take a safety early during the draft, and now follow up that move by adding Kazee into the fold.

So, what exactly is Pittsburgh getting in Damontae Kazee. To put it simply, they are getting a versatile, opportunistic defensive back that has a real knack for take the ball away and making splash plays on defense. A ballhawk coming out of San Diego State back in 2017, Kazee picked off 17 passes during his time with the Aztecs. After playing sparingly as a rookie in 2017, Kazee enjoyed a breakout 2017 season, intercepting a league-high seven passes while deflecting ten others. Kazee started his career as a nickel corner, but really found a home as a deep free/split zone safety, having the instincts, eyes, and range to cover ground and make plays on the football when in the air.

In the clip above, you see Kazee line up at single-high safety and show the range to get to the sideline to pick off the pass by Drew Brees. In this next clip, we see Kazee line up in a two-high safety look as the safety to the bottom of the screen. He sets the midpoint between WR #1 & #2 at the right side of the formation and keeps his eyes on the QB rolling out of the pocket, breaking on the ball once thrown to #2 and successfully tracks down the ball, jumping in front of the pass and picks it off.

Kazee has had his fair share of ball production come off tipped passes and overthrows, but he does possess a real feel of breaking on the ball and jumping the route to make splash plays. Here’s an example where he’s lined up as the safety to the top of the screen and sits on the slot receiver coming right at him in the end zone but reads Justin Herbert’s eyes and comes off the slot, leaping up to intercept the pass as the receiver on the outside of the formation falls, getting the turnover for the defense.

On this rep against the Saints, we see Kazee show off more of that versatility, dropping into the box as the nickel/dime defender and sits in zone coverage on the underneath quadrant of the field, playing the under thrown pass by #7 Taysom Hill and nabs the easy INT.

However, this aggressive, playmaking nature can get Kazee in trouble at times when he needs to be more assignment-sound. Take, for example, this play against the New England Patriots last season where Kazee is rolling over to the sideline at the bottom of the screen as the deep safety in coverage as #7 Trevon Diggs loses a step in coverage on the receiver. However, Kazee misjudges the pass, going to the outside to try and pick it off while the receiver catches the ball on the inside, catching the pass in-stride as Kazee whiffs on the play and the receiver scoots for an 85-yard TD.

Despite being listed at 5’10 1/4”, 184lb, Kazee plays with a physical, aggressive demeanor as a tackler. He is not one to shy away from contact and routinely shows a willingness to fly in and aid in run defense as well as break on passes thrown underneath near the LOS. We see the same range Kazee displays in coverage on this play against the Eagles as he comes from the deep safety spot, tracking down the back attempting to get to the sideline and pounces at him, putting the runner on the ground.

We see a similar example here against Carolina as Kazee comes downhill to fill the alley on the inside run, meeting the tailback in the open field and takes him down with a nice form tackle.

We see a similar display of effort in pursuit of the football a few plays later in the same game as #2 D.J. Moore catches the shallow crosser and turns up the left sideline. Kazee gets on his horse and takes a good angle of pursuit to cut off Moore, turning his shoulders and wrapping up his legs as Moore attempts to evade the tackle, successfully putting him on the ground to prevent even more yardage gained.

Given his size and stature, you would think that Kazee wouldn’t bring much of the boom as a hitter. However, much like his ability to generate turnovers in the passing game, Kazee is constantly looking for ways to knock the football out, whether it be via big collisions or subtly hitting the ballcarrier in the right spot to knock the ball loose. Kazee has seven career forced fumbles according to Pro Football Reference, and he added to that total last season in the Week 1 opener against Tampa Bay with this hit on #14 Chris Godwin. Watch as Kazee squares up Godwin near the goal line and goes low on the tackle attempt, putting his helmet on the football to jar it loose that the defense recovers.

Still, His aggressive nature as a tackler also tends to get Kazee in trouble from time-to-time as well. His tendency to go low at the defender’s get leads to him dropping his head which presents opportunities for ballcarriers to either evade or hurdle him. He also can be reckless on occasion flying in like a heat-seeking missile to meet the ball as it arrives to the receiver, resulting in unsportsmanlike conduct penalties like this one on Tommy tremble last season. There could be an argument of whether the hit was clean, but free yards to the offense is never ideal.

Overall, the signing of Damontae Kazee presents the Pittsburgh Steelers yet another experienced, skilled option in the secondary. While most of his production the last few years has come at the safety position (more specifically free safety), Kazee has shown the ability to wear a variety of hats, playing nickel a fair amount in college and in the pros as well as can be that safety to occupy the middle of the field when Pittsburgh wants to roll Minkah Fitzpatrick closer to the LOS.

Kazee also brings the splash play factor the Pittsburgh has desperately needed for some time now, having struggled to consistently create turnovers in terms of INTs and forced fumbles in the secondary outside of stupendous play by All-Pro Minkah Fitzpatrick. Kazee brings that to the table as well as being a willing and capable run defender that has no issue sticking his face in the fan when it comes to run support.

Depending on how much Kazee is signed for, this looks to be yet another savvy, underrated move by Kevin Colbert, adding a defensive back that should likely be a lock to make the roster and make a notable contribution on the backend of the defense in 2022.

What are your thoughts on the signing of Damontae Kazee? Do you think that he will a key contributor on the defensive side of the football for Pittsburgh in 2022? Do you see him more as a sub package defender, or do you think he may challenge for a starting nickel/safety spot? Please leave your thoughts in the comments section below and thanks again for reading!