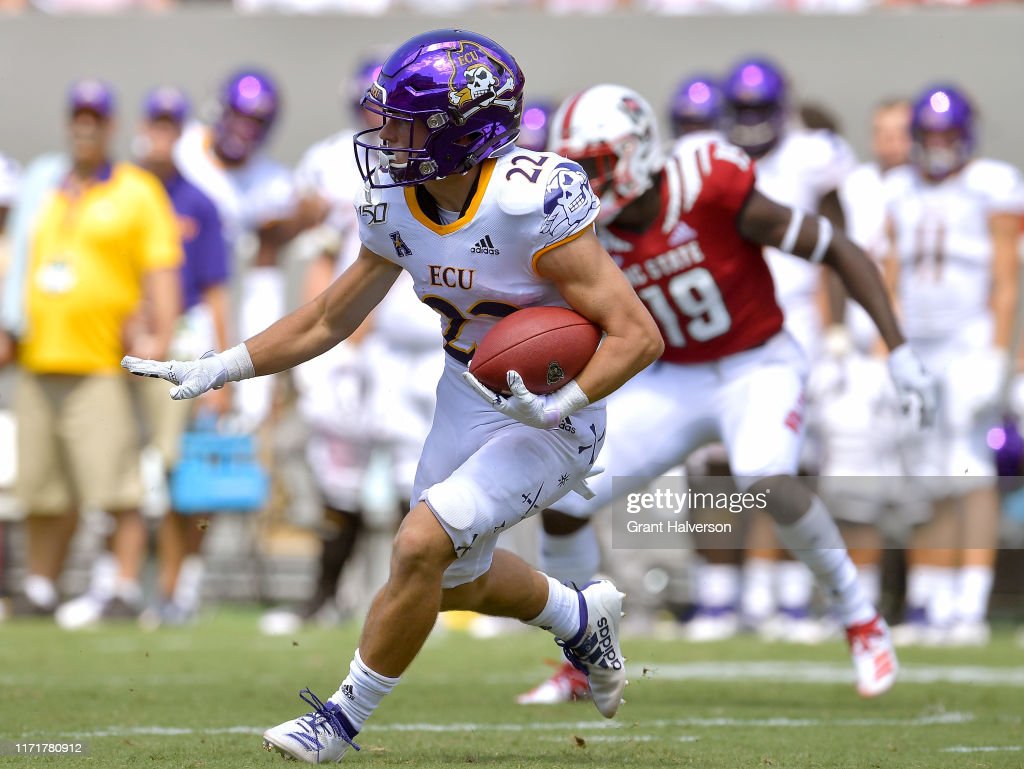 It was announced Sunday night that the Pittsburgh Steelers were signing East Carolina wide receiver, Tyler Snead, after getting a tryout at rookie minicamp. Snead originally was a walk-on at ECU where he didn’t take long to blossom as he had four touchdowns in four games a true freshman before being sat down to keep his redshirt classification. He went on to lead the team in receptions his next three years while getting two-consecutive second-team All-AAC designations under his belt.

— Functions well against zone coverage, often finding the holes in the zone and sitting in them
— Overall has good hands and has shown the ability to bring in contested catches over the middle consistently
— Excels at secondary releases against squat defenders
— Has good awareness and body control to miss reroutes from defenders over the middle
— Shows the ‘want to’ in the blocking game even if it’s not always effective
— Easily tracks ball over the shoulder on deep balls and corners
— Knows how to operate in scramble drill situations with several of his receiving touchdowns coming on broken plays
— Proven as a return man with 21.1-yard career average in kickoff returns and 2 kickoff return touchdowns

— Struggles to get open against man coverage consistently due to lack of acceleration out of cuts
— Defenders can easily make up ground even when initially beat against him due to lack of speed
— Can and will get bullied by larger, physical defenders in the run game and against press
— Doesn’t have the size or speed on the outside to win consistently, will be pigeonholed to the slot
— Never going to be very dynamic after the catch
— Easily brought down by arm tackles or pushed off his feet due to lack of size
— Doesn’t bring feet with him consistently while blocking, looks for initial contact and stops

— Played in 36 games at East Carolina
— 201 receptions 2380 receiving yards 11.8 yards per catch 18 receiving touchdowns in his career
— Averaged 21.1 yards per kick return in his career with two being brought back for touchdowns
— Earned Second-Team All-AAC as a WR in 2021 and 2020
— Led team in receptions in 3 consecutive seasons
— Communications Major
— Earned membership to Honors College at ECU immediately upon enrolling and was on the school’s Honor Roll for the fall and spring semesters of 2019, 2020 and 2021
— A two-sport (football, baseball) standout who earned a total of six letters at Millbrook High School
— Father played baseball at NC State and was selected by the Cincinnati Reds in the 29th round of the 1991 MLB draft
— Sister Sydney was an All-American gymnast at Georgia from 2016-19
— Aunt is a former ECU women’s basketball standout who led the Pirates in assists, steals and minutes played for three consecutive seasons

As Alex Kozora wrote in his breakdown of mini-camp tryout players, Snead was a ‘productive slot receiver in college, he should remain in that role in the NFL.’ After watching the tape I don’t disagree with the take at all. Kozora also mentioned Snead was the most mentioned player out of the tryouts so let’s dive into the tape and try to find out what is in his game that may have impressed the Steelers coaches during mini camp.

One of the most important traits for a slot receiver is the awareness to find the holes in zone coverages. Snead certainly has the ability to do this. Below, he’s running an out route. He initially inside stems off the line to square up the defender inside him, when he sees the defender immediately expand, the light bulb goes off that it’s zone. So at the top of his route, instead of breaking out and running into the zone coverage, he sits down and makes himself available for the quarterback. Great rep.

Snead may not be the quickest, and he’s certainly not the fastest (4.63 – 40), but where he does excel as a route runner is his secondary releases. Secondary releases are used against “squat defenders” that try to “catch” you off the line of scrimmage rather than straight-up press. Watch as he uses a power skip and a foot fire once he gets to the defender to freeze them before breaking towards the corner. He finishes the plays off easily tracking the ball over his shoulder for touchdowns.

Snead’s bread and butter was this in-route with a little shake at the top. You can see it progress in the three clips below from incompletion, to catch, to an explosive play.

He also showed he can make some tough catches up the seam and over the middle. Here, he again has a secondary release of the squat defender and is able to swipe off him to create enough separation for the catch before the hit the from the safety.

The former 3-year letterman in high school baseball has an arm on him. While it’s probably unlikely you’ll see much of this from Snead in the NFL, the possibility is there. The below throw against South Carolina was particularly impressive, right in stride before getting his head taken off by the edge rusher.

Now for the not-so-good with Snead. His lack of size, speed, and elite quickness really hinders him against man coverage and press man coverage. All the clips below are actually nice, clean routes, where he initially does beat the defenders. However, he doesn’t have that burst or acceleration out of his breaks to get open. The defenders easily make up the ground and blanket him.

Working in the slot in the NFL also means you can’t be afraid to get your nose dirty in the run game. Snead does show good want to. Below against Cincinnati, he’s able to close out and act like he’s about to run that in route before locking up the defender. He keeps his legs driving and is able to allow the running back to cut off his butt for a few extra yards. Nice rep.

While the ‘want to’ is there, more times than not, I saw Snead not bring his legs with him after the initial contact. This allows defenders to easily slip off and make the tackle.

Snead’s overall size will forever limit him against bigger, physical slot defenders. You do sometimes see him get pushed back against press coverage. The clip below, while trying to block, he gets completely forklifted onto his back. The defender decides to add insult to injury with the helmet tap after the play.

The last thing to cover with Snead is his return ability. He averaged 21.7 yards per kick return over the course of his career with two being brought back to the house. He also returned punts, but only averaged a measly 7.0 yards per punt return over his career.

Overall, I thought Snead’s tape was on par with what one would expect from a mini-camp tryout player. His lack of overall speed and top-end quickness really limits him as a receiver, especially against man coverage. It really came to the forefront playing teams like Cincinnati and South Carolina who have fast, physical defenders similar to what you’d see in the NFL.

After watching guys like Ryan Switzer and Ray-Ray McCloud come and go the last few years, who were much better athletes on tape and the stopwatch, it’s hard to see Snead being able to stick in Pittsburgh. I wasn’t at mini camp to see exactly what Snead did to impress the staff, but if I had to guess he was darn good at catching punts and kicks and Danny Smith wanted to keep him around to take some of the duties away from Gunner Olszewski in the preseason, but that’s just my hunch.