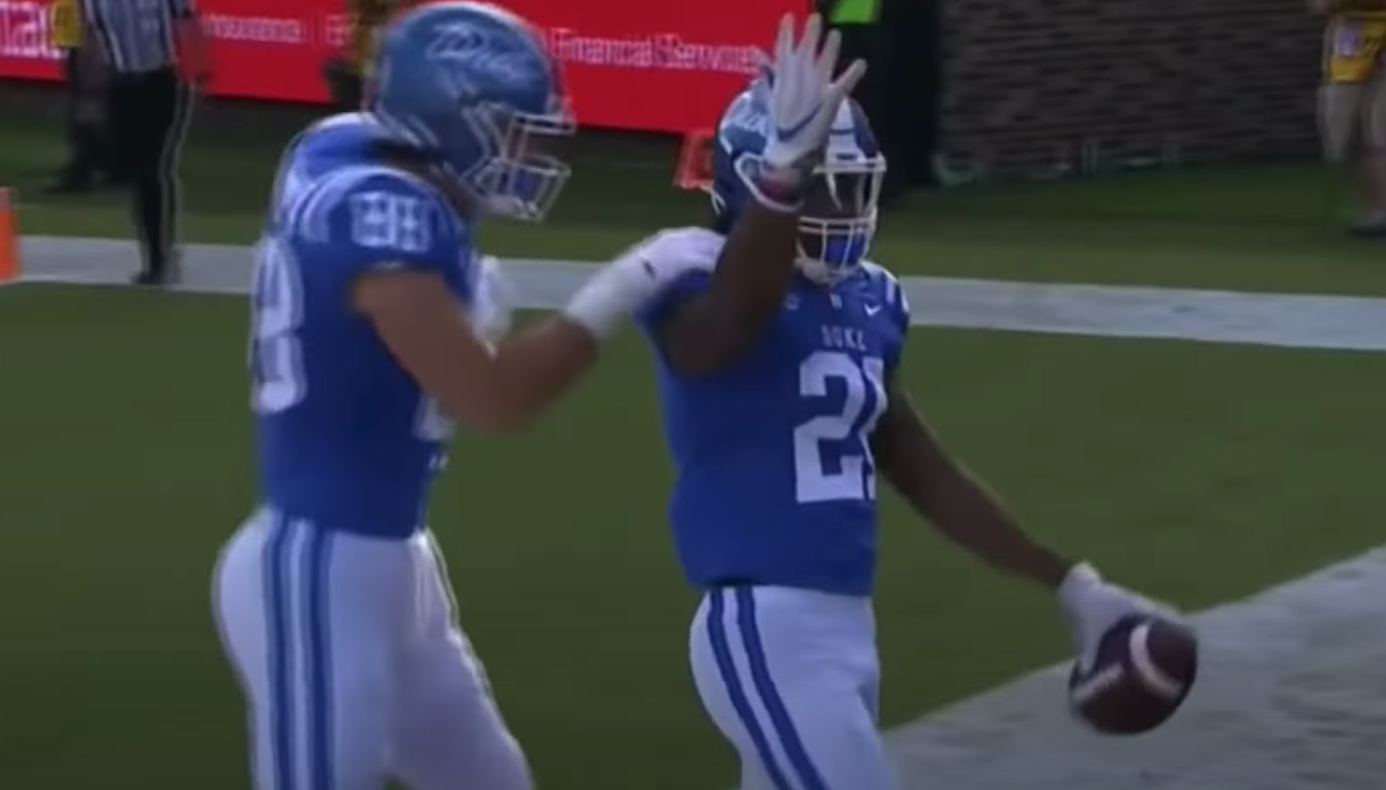 Shortly after the 2022 NFL Draft concluded, the Pittsburgh Steelers signed two UDFA RBs to the in Duke’s Mataeo Durant and Oklahoma State’s Jaylen Warren. While Warren fits more of the prototypical mold of a big, bruising-style runner Pittsburgh has become known for over the years, Durant is a leaner, slender-body running back standing at 5’11 3/8”, 196lb. While not the physical prototype of Rb Pittsburgh has become affiliated in recent years, Durant brings the element of speed and explosiveness to the table that Pittsburgh hasn’t had in the backfield for quite some time. Durant tested well at his Pro Day in which GM Kevin Colbert was in attendance, posting a 4.38 40, 10’7” broad, and a 35” vert that indicate his athleticism.

When you dive into the tape on Durant as a runner, you notice those explosive traits right away. Alex Kozora of Steelers Depot completed the UDFA profile on Durant, describing him as a “bursty runner with good one-cut ability” and “Shows good open-field speed, not quite to timed speed but above average overall.” When you go back through the stat sheet, you see that Durant had three 50+ yard runs in 2021, again showing that ability to rip off a home run if he gets into the open field. Take a look at this TD run against Charlotte gets through the hole on the inside zone run, stiff arming one defender then accelerates in the open field for the house call.

When watching Durant’s tape, you can’t help but notice all of the big, explosive runs he rips off coming on inside zone despite being a smaller back. Steelers Depot contributor Andrew Shaver recently conducted a study on the notable increase of called inside zone runs in 2021 under new OC Matt Canada, jumping up to 44.2% of all called run plays which ranked fourth in the league in 2021. Considering that half of Durant’s rushing attempts came on inside zone runs in college and he proved to be quite successful (245 attempts for 1,299 yards (5.3 YPC) and ten TDs, 68 first downs, and 32 10+ yard runs), it’s no wonder why Pittsburgh made signing Durant a priority at the conclusion of the draft.

Kozora echoed those same sentiments in his pre-draft profile on Durant, stating that he “shows vision to find the hole, able to bounce runs wide when defense collapses.” You see that vision when Durant is asked to run up the middle through the teeth of the defense, having the ability to squirt through the smallest of gaps while attacking the hole fast to get loose into the second level to break off an explosive play. We see that here on this 57-yard TD run against Kansas as Durant makes a quick cut to the right and shoots up the hole at the LOS, outrunning the angles of pursuit by the defenders coming from either side as gets into the open field and finishes in the end zone for the score.

When referencing the ability of Durant to ounce plays to the outside as mentioned above, watch this run against Virginia this past season where Durant has nowhere to go after receiving the hand off on third-and one. Durant runs into the back of his lineman who has fallen down, but manages to bounce it to the outside, showing off his speed to the corner as he picks up the first and takes the corner to the sideline for a 24-yard gain when nothing was there.

Here is another example against NC State where we see Durant’s speed around the edge, having the ability to accelerate after taking the hand off as he gets into the second level of the defense and weaves his way past one defender before getting tripped up on a diving tackle attempt.

Again, another example against Northwestern where we see Durant’s speed around the corner to get around one defender and pick up the first along the sideline.

As stated earlier, Durant has the requisite vision to excel on inside zone runs, having that feel for a hole opening and the ability to make a quick lateral cut and get vertical in a hurry. Here against the Tar Heels, we see Durant take the hand off on the inside run and immediately hit the hole slightly to the right, avoiding the defender reaching out to grab him while outrunning the defender flying in from behind as he gets up the field into the secondary where he is eventually brought down on a side blow by the safety after ripping off a 37-yard scamper.

While Kozora notes in his report that Durant’s play speed may not match up with his testing speed exactly on tape, I will recognize that he is plenty fast in the open field and has that burst to pull away from most defenders when he sees daylight. Take, for example, this run from 2020 against Florida State where Durant takes the inside zone run on the left side and explodes through the hole, getting into the secondary with one man to beat. He doesn’t use a second gear to burn the angle of pursuit on the safety but manages to pull away from the defender just enough to take it 64 yards to the house.

If you want another example of Durant’s pure open field speed and burst, watch this run against North Carolina in 2020 where Durant gets an open lane up the middle and breaks the angle of pursuit twice from two defenders converging on either side of him for a 46-yard house call. While a productive, efficient runner in 2021 as the feature back, Durant was even more explosive and efficient in 2020, averaging 6.8 YPC on 120 attempts for 817 yards and eight scores while sharing the load in the Blue Devil’s backfield.

With former first-round pick and feature back Najee Harris in the fold, Durant would never likely be expected to carry a heavy workload like his did this past season at Duke. Rather, should he make the roster, he could fit a similar role like his did in 2020, being a change-of-pace back that could serve as the “lightning” to Najee’s “thunder” in terms of running style.

Given his effectiveness and vision to executing an inside zone running system that he should see plenty of in Pittsburgh as well as the speed and burst to rip off big plays, Durant could be the perfect complement to Harris as a runner that brings a different element to the backfield that Pittsburgh has sorely missed since the days of “Fast Willie Parker” nearly 15 years ago.

Granted, NFL defenses should be faster and the holes not as large compared to the college game, thus making it likely harder for Durant to maintain that same effectiveness at the next level. Still, the addition of Durant provides Pittsburgh with a potential solution to their search of a speed, pass-catching back that they tried to have Anthony McFarland be a couple years ago, but has failed to catch on in two seasons with the team.

While watching Durant run, I cannot help but get Jamaal Charles vibes when watching his explosive running style along with a nearly identical slender frame (Charles 5’11, 200lb, 4.38 40). Still, I acknowledge that Charles was a far more well-rounded back coming out of Texas than Durant, having the strength and lateral change of direction skills Durant lacks. Still, they are similar style of runners, and if Durant could be a poor-man’s version of Charles or say other comparable backs like Nyheim Hines or Phillip Lindsay, Kevin Colbert may have gifted Pittsburgh with a diamond in the rough in his final season as GM while making a surprise stop to Duke’s Pro Day to watch Durant work out.

What are your thoughts on Mataeo Durant? Do you think that he provides an explosive element to the backfield that Pittsburgh has been looking for? Do you see him making the roster and being a contributing member as a potential complimentary runner to Najee Harris? Please leave your thoughts in the comments section below and thanks again for reading