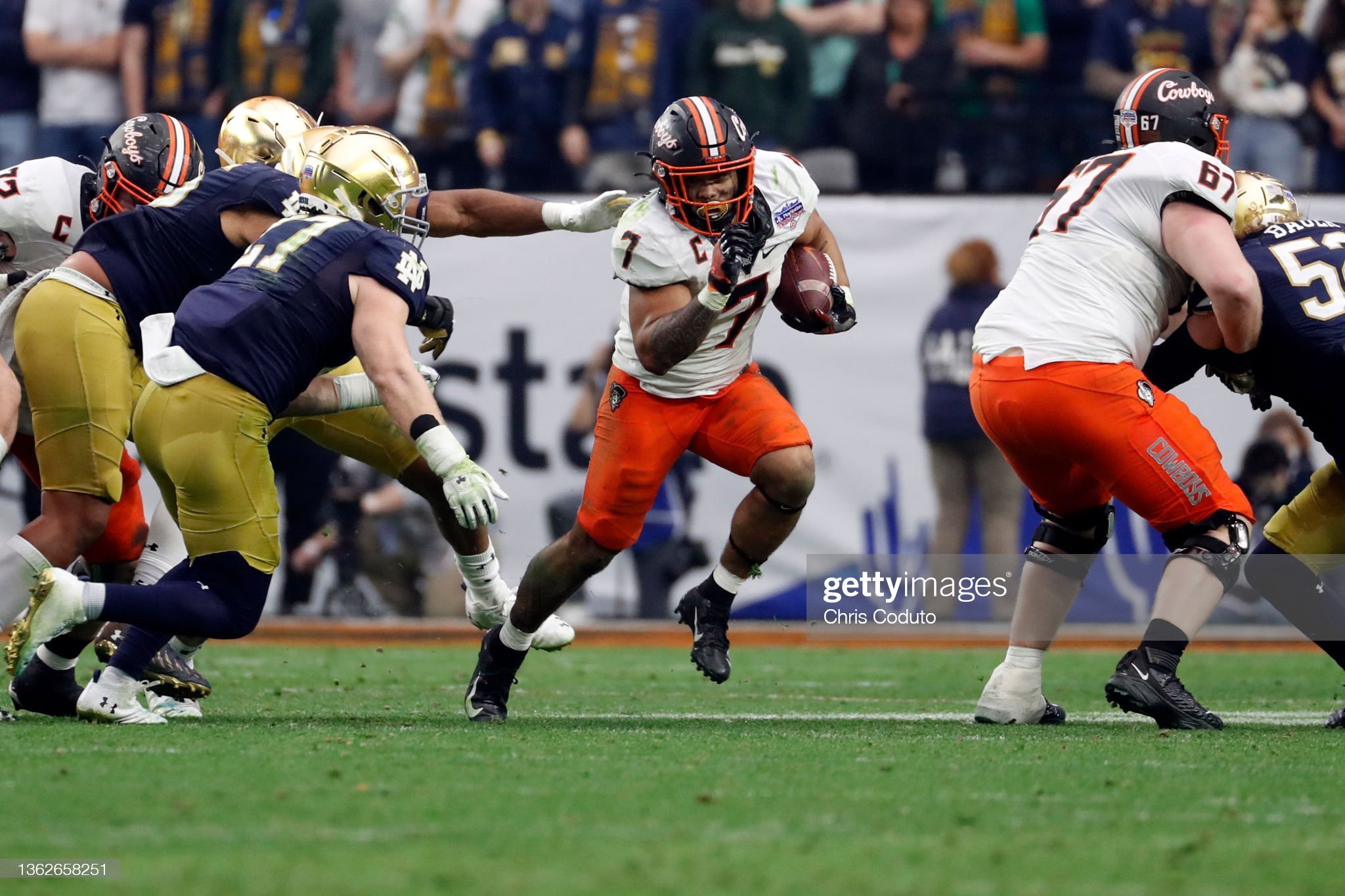 After the 2022 NFL Draft concluded, the Pittsburgh Steelers agreed to terms with several UDFAs to add to the preseason 90-man roster. Among them were RBs Mataeo Durant out of Duke and Jaylen Warren out of Oklahoma State. It was a bit surprising that Pittsburgh elected to not address the backup running back position in the draft, but after breaking down Durant’s film and his knack for ripping off explosive plays in a recent film room, I came away impressed with that area of his game. Given the fungibility of the RB position, it makes some sense why the team elected to go the Dave Bryan route and bring in a couple UDFAs off the street to fight for a backup job in training camp.

As for Warren, he brings a completely different element to the table as a runner than Durant. Jaylen Warren is a stocky, dense running back, standing 5’8, 207lb possessing average speed (4.55 40) and decent explosiveness for the position (34” vert, 9’10” broad). He shows some burst in the open field and can accelerate well when he gets into space. Still, when watching more of Warren, his size, frame, and running style portray a pinball, bumper car-style, as site contributor Daniel Kitchen depicted in his UDFA profile on Warren, routinely bouncing off would-be tacklers and often running through arm tackles with impressive strength given his lower center of gravity.

When we see Warren on film, we notice an aggressive, physical running style where he looks to be the hammer rather than the nail on contact with the defender. He invites contact as a runner and often isn’t taken down by the first man on the scene as we see here against Kansas State where Warren bursts through the LOS, running through two defenders converging on either side of him and proceeds to stand up the DB on a collision in the open field, showcasing his lower body strength and contact balance to shrug the defender off and keep running with multiple defenders dragging him down from behind.

Here is another example of Warren’s contact balance on this run against Notre Dame, jumping out of an ankle tackle attempt near the LOS and runs through another diving arm tackle attempt, before eventually being dragged down by defenders in pursuit.

We see Warren showcase a similar run here against Texas, taking the hand off and makes a quick cut to his right, getting into the open field where he proceeds to jump out of one diving tackle attempt as he gets to the sideline and nearly jumps out of another before getting tripped up after picking up the first down.

We see Warren’s ability to absorb contact and use his leverage due to his shot, sturdy frame be a great advantage in short yardage and goal line situations, having the ability to run through initial contact and churn his legs forward to pick up the first or push his way into the end zone. Here are two examples against TCU where Warren meets contact before the goal line but uses his lower center of gravity and lower body strength to stay upright and fight his way across the goal line for two separate TDs in the same contest.

While a strong, sturdy runner, Warren also has some elusiveness to his game, having the ability to be a one-cut runner that can get up the hole and accelerate decently well into the second level. This allows Warren to sneak through the smallest of gaps thanks to his smaller stature that also presents a smaller strike zone for defenders to locate and properly wrap up to tackle. Here against Baylor, we watch Warren take the hand off on the outside zone run, making one cut right off the backside of the LT to evade S #8 Jalen Pitre flying in to make the play as Warren gets vertical and runs through two defenders meeting him and the goal line to hit pay dirt.

There are plenty of instances on tape where Warren combines the strength and power to run through arm tackles with his vision and contact balance to evade would-be tacklers in space as well. Take, for example, this highlight run from Warren last season against Tulsa where Warren is met immediately in the backfield but a linebacker coming free through the gap as Warren tries to get to the outside, managing to shake off the tackle and cut back inside. As Warren is met by resistance up the middle, he bounces it outside to the right again, jumping out of one diving tackle and jukes away from another to get to the sideline and high steps in for the score.

Jaylen Warren fits more of the mold of a traditional Pittsburgh Steelers running back, having the size and strength to grind in-between the tackles, yet uses his shorter, dense frame to run through tackles like a bowling ball. His reduced surface area makes it difficult for defenders to put a good hit on him compared to runners like Najee Harris and Le’Veon Bell that stand over six feet tall and have more of a strike zone. Combine this with Warren subtle elusiveness to make one cut and evade tackles in the open field, and you have a runner with the skillset to churn out a decent amount of YAC as his missed tackles forced statistics indicate.

While I recognize Martin to be a more-complete back in terms of suddenness and overall burst at the RB position, both players are short, compact runners with an aggressive running style that will punish defenders when they decide to lower the shoulder and plow ahead. The possess nearly identical open field speed and have that one-cut ability to get up the hole and evade defenders in space, racking up missed tackles.

Warren will likely never live up to the impact Martin had during his short stint in the league, but should he win a roster spot out of training camp, he could make for a viable backup behind Najee Harris as a capable runner between the tackles that has the size to carry the load as well as the skillset much like Martin possessed to force plenty of missed tackles, whether it be by evading defenders or simply running right through them. Warren and Durant bring completely different skillsets to the table as UDFAs, but there is no denying based on tape study that there may be something here with both backs as the attempt to make the roster.

What are your thoughts on Jaylen Warren? Do you think he has a real knack for breaking tackles and that this skillset will translate to the NFL? Do you see him as a potential quality backup to Najee Harris in the backfield? Please leave your thoughts in the comments section below and thanks again for reading!