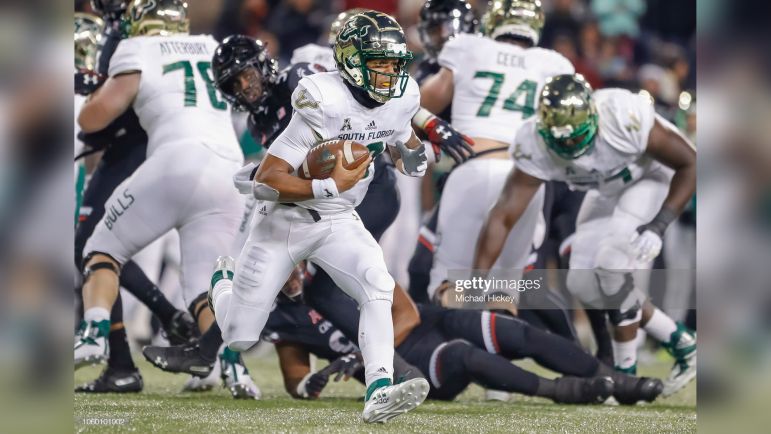 The Pittsburgh Steelers selected South Dakota State QB Chris Oladokun in the seventh round with the 241st pick of the 2022 NFL Draft to wrap up their draft class last Saturday afternoon. The Steelers had already selected a QB in the first round, making hometown Pitt QB Kenny Pickett the pick at #20 overall, but felt compelled to draft Oladokun to round out their draft class. Steelers Depot’s very own Alex Kozora nailed the pick in his final mock draft, providing the following as reasoning why they may feel compelled to double dip at the position:

Pittsburgh’s shown interest in Oladokun, attending his Pro Day and bringing him in for his pre-draft visit. He’s garnered plenty of buzz over the last month with several workouts and visits with other teams. If the Steelers want to guarantee they get him, they need to draft him. Pittsburgh doesn’t exactly pay well in the UDFA pool either.

Kozora’s analysis was spot-on as Oladokun was in-fact their final selection. GM Kevin Colbert made sure to praise Oladokun in the post-selection press conference, stating that the team had “very high grades on him” coming out of South Dakota State and that he “impressed us not only on the field, but with his off the field talents and intelligence and just demeanor.”

When you watch Oladokun on tape as Kozora points out in his pre-draft profile, you see a below-average sized QB with a thin frame but throws the ball with a fair amount of zip and accuracy. However, one big component that Kozora points out in his breakdown on Oladokun and likely a key reason Pittsburgh was attracted to him during the pre-draft process from an on the field perspective was his mobility at the QB position as he “keeps plays alive with his legs, prefers to keep eyes downfield but able to take off and occasionally make defenders miss in open field, lacks great speed but a threat to scramble.”

Oladokun’s Mobility as a Passer

When you pop in the tape on Oladokun from this past season at SDSU, you see that requisite mobility Kozora talks about. The Jackrabbits executed a pro-style offense that required Oladokun to operate both from under center and in the shot gun, having to adequately perform play action rollouts from the pocket where he would have to throw on the move. He was able to accomplish that as you see in this first clip against Southern Illinois, rolling to his right and throwing on the run down the right sideline. The ball is a tad short as the receiver must slow down to make the catch, but still a good throw from Oladokun off-platform.

Here is another example against Colorado State as Oladokun fakes the gun in the shot gun and rolls out to his right, locating his receiver in the end zone and delivers a strike while getting hit to his intended target in-stride for the score.

We see a similar throw by Oladokun here against Montana State here in the semifinals, rolling to his left after faking the give and throws a dart to the receiver streaking across the middle of the field for the first down while getting hit by the defender in pursuit.

As Kozora mentioned earlier, Oladokun can run, posting a respectable 4.71 40 time as his Pro Day, but tries to keep his eyes down the field as passer first, attempting to locate receivers breaking open at the last moment to hit them for first downs. We see a good example of that here on this next clip against the Bobcats as Oladokun leaves the pocket as the pressure sets in, pump-faking to one receiver and then finds his TE open at the last second, tossing him the ball while getting crunched for the first down catch-and-run.

Clayton Eckert of Steelers Depot was kind enough to send me statistical date on Oladokun’s performance out of the pocket on throws in this game as he completed three passed six attempts for 49 yards and two TDs. 80% of Oladokun’s pass attempts outside the pocket were deemed catchable with and average throw depth of 11.4 yards per pass attempt according to Sports Info Solutions.

Oladokun can also simply maneuver inside and outside the pocket as a passer, moving to evade the rush and wait for receivers to open up like on this play where he initially wants to take the shot deep, but works back across the field, finding the receiver sitting in the soft spot of the zone coverage, plants his feet, and throws a strike  for the first down.

Still, Oladokun needs to improve his awareness both as a pocket passer as well as on the move to truly capitalize on his mobility. One thing that stuck out while watching him is that he seems to be oblivious to pressure at times and needs to understand when to step up in the pocket to avoid taking unnecessary hits or a sack. Here against the Bobcats, we see Oladokun roll out to his right on the play action pass, plant his feet, but fail to step up as the pass rush closes in, panicking at the last second as he gets sacked from behind.

Oladokun also is a gambler as a passer: whether it be in the pocket or outside of the pocket. He takes unnecessary risks with the football and trusts his arm a little too much at times like you see on this throw in the NFLPA Bowl where he takes the snap from under center on the PA Rollout to the left, having a defender bearing down on him immediately as he turns around. Without thinking or trying to sidestep the defender, Oladokun sidearms the pass up for grabs, sailing it over the receiver’s head right into the hands of the safety for the INT.

Oladokun’s Mobility as a Runner

While Oladokun does do a good job keeping his eyes downfield as a passer first while on the move, he does have that ability to tuck and run the football if nothing is there. We see a modest example here against UC Davis where Oladokun opts to not take the check down in the flat to the RB, but rather decides to drift out of the pocket and run the ball himself for a four-yard gain. Oladokun needs to improve his pocket presence and not leave the pocket so early if it is clean, much like Kenny Pickett does, but it is nice to see that ability to call one’s own number and create for himself with his legs.

Here are two better examples of Oladokun’s mobility as a runner as he tries to evade the rush from the pocket, making several defenders miss in space as he finds green grass and gets up field, turning something out of nothing with his legs and moves the sticks while wisely getting out of bounds.

Still, while Oladokun has this ability to escape the pocket as a runner, he does need to be more cognizant of ball security much like he needs to be as a passer. Oladokun boasts a lean, slender frame and has shown a propensity to put the ball on the ground if not careful during his time in college. For a QB that can take off and run with it, the importance of ball security must be stress like on this play from the NFLPA Bowl where he escapes the pocket to his right, takes off up the sideline, and loses the ball as he dives forward. Luckily for Oladokun, the ball rolls out of bounds.

Overall, Chris Oladokun isn’t the most dynamic athlete at the QB position but does bring that level of mobility that HC Mike Tomlin has stressed throughout the pre-draft process in a similar mold to the QBs Pittsburgh has also added to the roster this offseason in Mitch Trubisky and Kenny Pickett. At the time of the selection, I personally would have preferred Pittsburgh select Nevada QB Carson Strong for his superior arm talent, but there is no denying that Oladokun is a better prospect when it comes to mobility at the QB position, both having the ability to extend plays as a passer as well as the ability to create with his legs as a runner.

While watching Oladokun, I couldn’t help but get Kellen Mond vibes who was drafted in the third round by the Minnesota Vikings last year out of Texas A&M. While Mond has more pedigree than Oladokun, both QBs share similar measurables with Oladokun standing 6’1 1/2”, 212lb with 9 1/4” hands and a 4.71 40 and Mond standing 6’2 5/8”, 211lb with 9 3/8” hands and a 4.62 40. The Steelers showed interest in Mond last year and Oladokun could be a similar, “Great Value” version of Mond who can be that developmental QB3 who may start out on the practice squad in 2022 before being named #3 QB on the depth chart much like Mond is in Minnesota.

What are your thoughts on Chris Oladokun and his mobility at the QB position? Do you see this as a strength in his game, or do you think it makes little difference in his projection to the pros? Do you think Pittsburgh specifically targeted Oladokun because of his mobility? Please leave your thoughts in the comments section below and thanks again for reading!