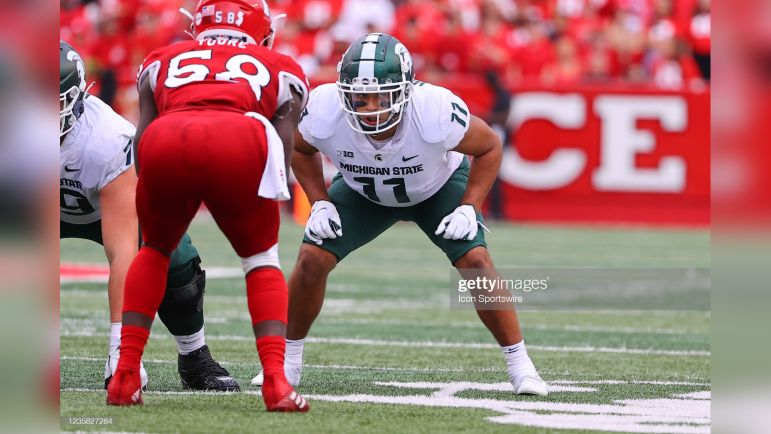 After being selected with the 208th pick in the sixth round of the 2022 NFL Draft, the sentiment of Connor Heyward being drafted by the Pittsburgh Steelers came with mixed results. On one hand, the selection was the most predictable of any for Pittsburgh given the fact his older brother Cam Heyward is already on the team and Pittsburgh has “a thing” for football families, currently having four sets of brothers on the 90-man roster. On the other hand, Pittsburgh already has an established fullback on the roster in Derek Watt, making Heyward’s projection to the team less clear-cut.

As mentioned in several articles on the site as well as in discussions on the Terrible Podcast, Connor Heyward is expected to wear a lot of hats and play a variety of roles for this team on offense as well as a potential core special teams player. While I plan to dive deeper into Heyward’s capabilities as a pass catcher and runner in the near future, this film room will be dedicated to his ability as a run blocker.

When watching the film, one has to rationalize that Heyward has only been playing the TE/H-Back position for one season, meaning that he was picking things up relatively on-the-fly last season during that transition. In Alex Kozora’s pre-draft profile on Heyward, he states that he is a “willing blocker able to stalemate on the LOS but shows effectiveness as lead blocker in second level or out in space.” However, on the negative side, Kozora points out that Heyward “gets overwhelmed with in-line work in run and pass game, loses early on and defenders able to get into his pads because of his lack of height and length.”

We see those negatives pop up on tape like on this play against Miami where Heyward is lined up as the H-Back on the right side of the LOS and is asked to pick up the DE on the edge. The DE manages to cross Heyward’s face as he fails to drive him off the ball or successfully down block him to create a hole, forcing #9 Kenneth Walker to bounce the run outside where he is bottled up for a short loss on the play. This fits well with Kozora’s statement above that he can struggle as an in-line blocker due to lack of technique as well as being unable to cut off larger defenders with his 5’11, 233lb frame.

However, there were several examples on tape where Heyward faired well on the LOS as a traditional/offset TE as a run blocker. Here is one example against Purdue where Heyward is offset to the right of the formation and double teams on the DE with the in-line TE before he climbs up to the DB, effectively sealing off the DE and manages to delay the DB as Walker scoots up the sideline for the score. You would like to see Heyward get off the first block faster to seal off the DB, but he does just enough to help Walker get the corner on the run.

Here is another example against Northwestern where heyward aligns more in the H-Back position and picks up the DE crashing inside, creating a nice cutback lane to the outside that Walker exploits for a long TD run up the left sideline.

Going back to a negative on Heyward as a blocker, he does tend to drop his head and not latch on consistently as a run blocker. For example, watch this play where Heyward lines up in the slot and runs to pick up the safety, but completely whiffs as he shoots his hands and drops his head, making it easy for the DB to throw him off. However, Walker luckily gets the corner and dives in for the score.

Still, while Heyward can struggle with consistency, he doesn’t lack the ability to get the job done and quite effectively for that matter. Here in the same game, Heyward is asked to block #2 overall pick Aidan Hutchinson one-on-one from the H-Back spot on the left side of the formation. Watch as he runs straight into Hutchinson and manages to down block him into the pile as Walker attempts to bounce the inside run to the outside after initially getting stuffed.  Hutchinson tries to rip off the block, but Heyward uses his momentum against him as Walker gets to the outside, running of Heyward’s backside for the TD.

If you think that this is just one singular instance of Hayward successfully blocking a stud DE, think again. Heyward saw a fair amount of run at the Senior Bowl as well as a blocker, specifically on this rep as a fullback where he locates first-round pick Jermaine Johnson coming off free on the edge and steps in and holds his own, allowing Dameon Pierce to plow through the middle of the LOS without having Johnson fly in from the side to get the TFL.

Here is a similar play to the one above against Hutchinson where Heyward is asked to down block the DE of Miami to clear an outside running lane for Walker off the left side. As you can see, Heyward executes this block perfectly, using the defender’s inside track to the ball against him as he clears him out, allowing Walker to run right off his back into the second level for a successful run.

We saw Heyward mess up earlier when trying to block the safety when aligned in the slot, but he successfully makes up for it in the same game on what would be another scoring run by Walker. Watch as Heyward picks up #30 Dax Hill in the nickel and successfully turns his shoulders to create a seal on the inside, walling off Hill to the sideline as Walker runs again off his backside into the secondary and into open grass for the score. When asked to block linebackers or defensive backs, Heyward can more than hold his own at the point of attack, just needing to come to balance as a blocker and aggressively use his punch to turn the shoulders of the defender on the block.

As Kozora noted earlier in his pre-draft profile on Heyward, he does some of his best work as a lead block out in space or in the second level. We saw an example of that above, but this next play against the Hurricanes may be Heyward’s best block of the season. Watch as Heyward pulls across the LOS from the H-Back spot and leads up the way for the receiver on the jet handoff. He locates one defensive back and gets on the outside shoulder of the defender, creating a seal for the runner to get to the sideline. Meanwhile, Heyward manages to pick up the safety coming from overtop as well, effectively blocking two guys as the receiver sneaks behind him into the end zone for the score.

Overall, it may be hard to expect Heyward to be fully utilized as a traditional in-line TE given his size and stature. That is completely fair, however, that doesn’t he can be occasionally used in that role as an offset TE at the end of the formation or from the H-Back spot as well as a traditional fullback, wingback, and slot receiver like he played this last season at Michigan State in the run game. Heyward has proven to be a capable runner when called upon, but the tape shows as capable run blocker as well that is only going to grow in this area of his game having played the position for one year. While his best work may come as a lead block out in space or in the second level, he has shown he can go toe-to-toe with DEs on occasion on the outside, meaning we could see a decent amount of him in heavy packages for Pittsburgh on the end of the LOS or as a lead blocker.