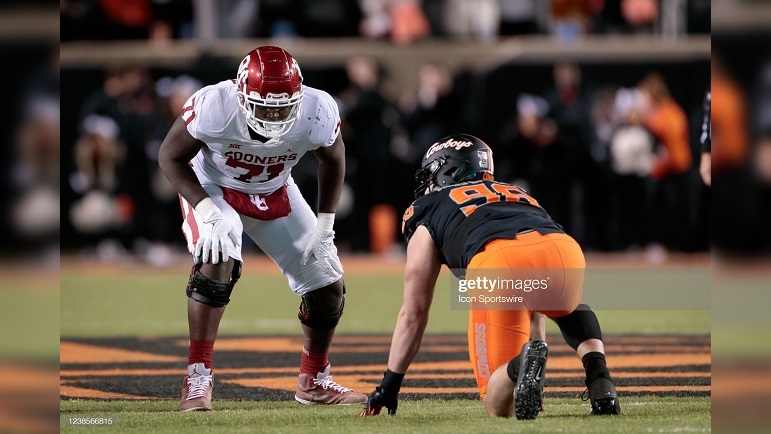 The 2022 NFL Draft is now in the books, and with that, I’m sure several of you are ready for the 2023 mock drafts to get underway. Well, not really, but just the same, I thought I would pass along one that Michael Renner of Pro Football Focus passed along on Monday morning.

Not only does Renner have the Steelers selecting 11th overall in 2023 NFL Draft, but he has also them selecting Oklahoma tackle Anton Harrison with that pick. Below is his reasoning for that.

“Harrison is an athletic 6-foot-5, 309-pounder who has already shown well in pass protection. In his first year as a full-time starter, Harrison earned an 85.6 pass-blocking grade.”

It’s obviously way too early to dive deep into who the Steelers might pick in the 2023 NFL Draft, and more specifically, what direction they might go in position-wise in the first round. That said, the Steelers did not add any offensive linemen in the 2022 NFL Draft.

Currently, the Steelers have tackles Dan Moore Jr. and Chukwuma Okafor slated to be their 2022 starters, and both are under contract for the next three seasons. Behind those two currently sits veteran Joe Haeg, who is in the last year of his contract.

In addition to possibly needing another tackle in the 2023 NFL Draft, the Steelers might be looking to address the outside linebacker, cornerback, and safety positions as well. They failed to select any of those positions in the 2022 NFL Draft.

As for the Steelers ultimately selecting a tackle in the first round of the 2023 NFL Draft, if they do go that route, it would mark the first time doing so since 1996 when they picked Jamain Stephens 29th overall out of North Carolina A&T. Stephens, by the way, was a huge bust. The last time the Steelers selected a tackle in the first round of a draft higher than 29th overall was way back in 1992, when Leon Searcy was picked 11th overall out of Miami.

As a point of reference, a year ago Renner had the Steelers selecting then-USC quarterback Kedon Slovis at 13th overall in the 2022 NFL Draft. Slovis ultimately did not declare for the 2022 NFL Draft, and has since transferred to the University of Pittsburgh.