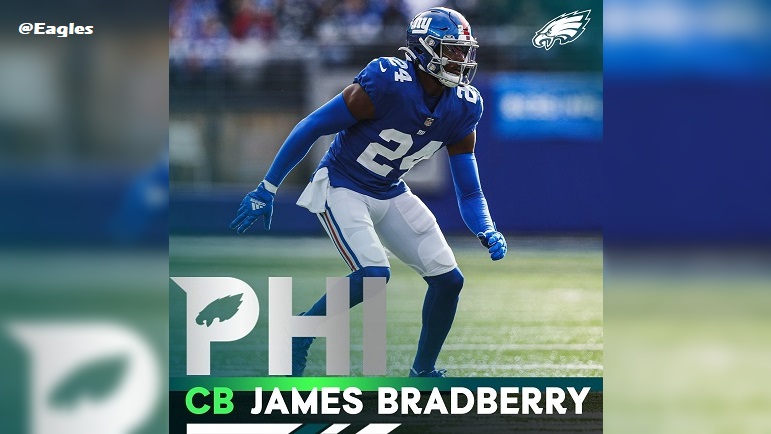 Not surprisingly, the Pittsburgh Steelers won’t be landing street free agent cornerback James Bradberry as he has reportedly come to terms with the Philadelphia Eagles.

According to Ian Rapoport on the NFL Network, Bradberry, who was cut by the New York Giants less than two weeks ago, has reportedly agreed to terms with the Eagles on a one-year deal worth $10 million.

It appears Bradberry’s deal with the Eagles includes incentives that makes it worth up to $10 million. Per Adam Schefter of ESPN, the Eagles will pay Bradberry $7.5 million, including $7.25 million guaranteed, and another $2.5 million in upside, bringing the possible total value of the deal to $10 million. It’s still unclear if the Eagles will add voidable years to Bradberry’s contract to help keep his 2022 salary cap charge down.

After Bradberry was cut by the Giants, Dan Duggan, the team’s beat writer for The Athletic, listed the Steelers as a potential landing spot for the former Pro Bowl cornerback.

“Though trade interest in Bradberry was tepid, expect a stronger market to materialize now that teams have the freedom to negotiate a deal from scratch without needing to part with any draft pick,” Duggan wrote. “The Eagles, Chiefs, Raiders, Bengals and Steelers are among the potential landing spots.”

More than anything, Duggan listing the Steelers as a possible landing spot for Bradberry was likely just mere and blind speculation on his part. Bradberry, however, initially had 11 teams inquire about him, according to Schefter, before his agents whittled it down to three teams and eventually chose the Eagles over the others.

There is no way that the Steelers were going to do a one-year deal with Bradberry that totaled more than $3 million as it is just not how they operate. If the Steelers did reach out to Bradberry, it was likely in hopes that they could sign him to a two-year deal at around $7 million per year or less.