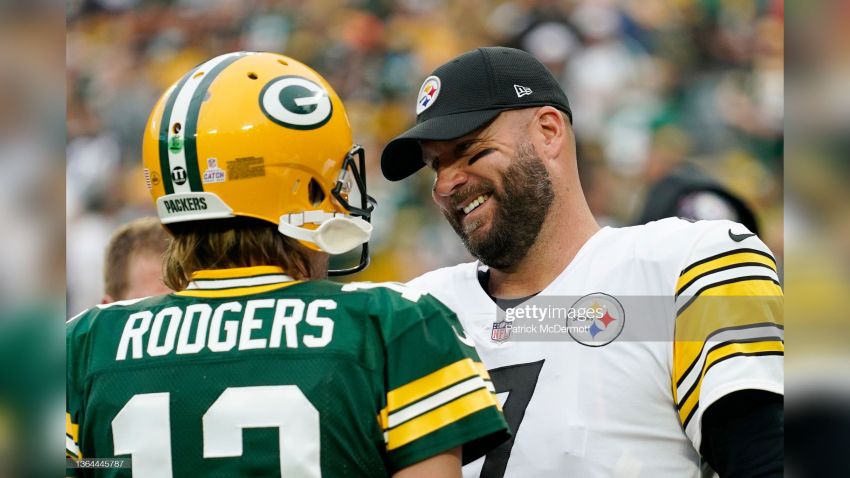 As a professed football fanatic, I was eating breakfast this morning while watching Good Morning Football on NFL Network, and the topic of conversation between the hosts fell on if they would rather have Ben Roethlisberger’s or Aaron Rodgers’ career accomplishments. Former RB/FB Michael Robinson sided with Roethlisberger, stating that “Super Bowl victories are the defining trait of a successful NFL QB in the greatest game in sports.” Fellow show host Kyle Brandt sided with Rodgers, recognizing that he has one less Super Bowl victory than Ben, but also sharing all his individual accomplishments as well as the fact “Rodgers’ Super Bowl win came against Big Ben in Super Bowl XLV.”

This got me thinking: would Steelers fans rather have the career accomplishments of Ben Roethlisberger or Aaron Rodgers since both came into the league? Seeing as Ben was drafted in the first round at 11th overall in 2004 and Rodgers at 24th overall the following year in 2005. While both QBs entered the year only a year apart, Rodgers had to wait his turn behind Brett Favre in Green Bay, not officially becoming the starter until 2008, whereas Ben took over the starting job in the second game of his rookie season and held it ever since.

For reference, here are some statistics and accolades of the two QBs side by side. All career accolades and statistics come via Pro Football Reference:

As you can see, both Roethlisberger and Rodgers are two very accomplished quarterbacks that will undoubtedly both be first-ballot Hall of Famers once they call it a career. Ben can expect to hear his name called to Canton here in 2027, whereas Rodgers is still writing his legacy after agreeing to a new contract with the Packers this offseason.

Playing and starting more games has helped Roethlisberger’s case in terms of more regular season and postseason wins, completions/attempts, yards, and TDs, whereas Rodgers excels in less INTs thrown as one of the most efficient passers of all-time in terms of QB rating and adjusted net yards/attempt. Rodgers also takes home the cake when it comes to Pro Bowls, All-Pro selections, and MVP nods. On the other hand, Ben blows Rodgers away when it comes to fourth-quarter comebacks and game-winning drives, and edges out Rodgers with three Super Bowl appearances while having one more Lombardi in the trophy case back in Pittsburgh.

This is where I will leave the discussion to yinz. As things stand today, which career accomplishments would you rather have as your franchise QB: Aaron Rodgers or Ben Roethlisberger? What is your reasoning for your choice? Do you see one stat more important than another in this comparison? What is the value of individual accolades vs team success when it comes to the QB position? Please leave your thoughts in the comments section below and thanks again for reading!