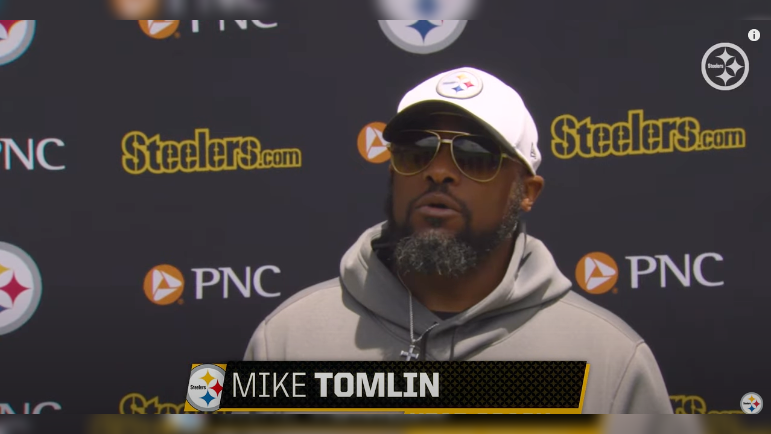 Though he was quick to point out that he knows not to get too excited by anything he sees on the field over the three-day period on the South Side, Pittsburgh Steelers’ head coach Mike Tomlin had an obvious pep in his step Saturday during Day 2 of the rookie minicamp for the black and gold.

Getting a chance to get to know his new young players in rookies Kenny Pickett, George Pickens, DeMarvin Leal, Calvin Austin III, Connor Heyward, Mark Robinson, Chris Oladokun and more, Tomlin is excited about the process overall while getting back to some semblance of football.

Speaking with reporters Saturday following the second day of practices at the Steelers’ South Side facility, Tomlin stated that there is some excitement and anxiety with returning to the field even after 15 years of doing this, because he knows this is the start of a long journey with the group of men he has before him, not only for the 2022 season in general, but hopefully for years to come.

Coach Tomlin on getting to know the rookies & more: pic.twitter.com/os7qPxo06U

It might not mean much overall outside of the facility as it’s just football in shorts that features a number of players that realistically won’t factor into the 2022 season at all for the black and gold, but Tomlin is spot-on with it being the beginning stages of team-building for the season ahead.

Ready for another day of work 😤 #HereWeGo pic.twitter.com/WskmkYN4Ei

Of course, Tomlin did highlight that it’s a learning process not only for him and the coaching staff, but for the players as well, but there’s value in the minicamp overall, even if it’s just three days as the players have the playbook installed, familiarize themselves with the coaching staff and their teammates, and really learn what is required to be a pro.

That’s where some of that excitement and anxiety can come from, especially for Tomlin, as a new season is essentially underway, meaning the real football that counts is just around the corner.