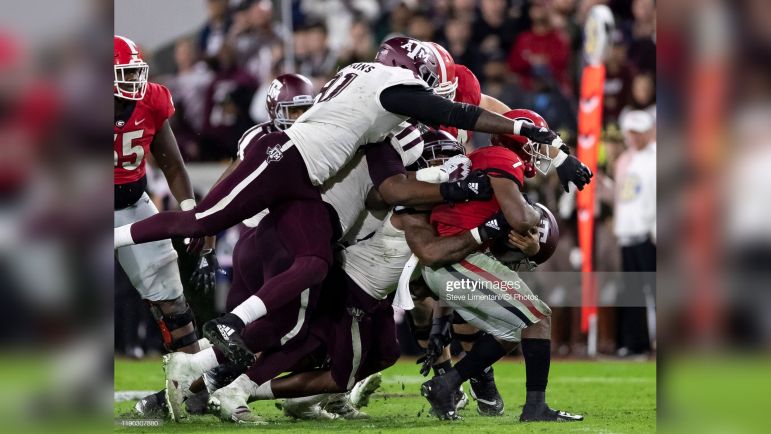 The Pittsburgh Steelers have begun accumulating Aggies over the past two drafts, selecting tackle Dan Moore Jr. and linebacker Buddy Johnson in the fourth round of the 2021 NFL Draft, and now adding defensive lineman DeMarvin Leal in the third round of this year’s draft process.

Moore was a 17-game starter for the Steelers at left tackle last season, including the playoffs, though Johnson hardly played, and in fact was most often a healthy scratch. He later ended up suffering a foot injury and finished the season on the Reserve/Injured List, but he has intentions for greater contributions in year two.

And Leal hopes to play in front of him again, naturally, noting that Johnson was the first to call him. But the three former teammates have communicated quite a bit since informed of their reunion back in Pittsburgh, and the two who have been here for a year already, as Leal told Missi Matthews for the Steelers’ website, had a message for him as he comes to town.

“That I’m gonna love it here”, he said, was the message that he got from Johnson and Moore about what to expect in the Steelers organization. “It’s a great place. Just can’t wait for me to get in. We hopped on a phone call last night and we just talked about—it was like, yeah, I got my linebacker back”.

But they’re also not alone. There are actually five Aggies on the roster, including rookie college free agent edge signing Tyree Johnson, yet another member of that defense with Johnson and Leal. Additionally, veteran tight end Jace Sternberger, who was on the practice squad last year, is yet another alumnus, at least for his final college season in 2018. He was teammates with all but Leal, who came into the program a year later.

Having teammates with you in the process is always helpful, and to start, Leal will have Johnson with him during rookie minicamp, but once OTAs arrive, he’ll also be around Johnson and Moore and Sternberger—assuming that OTAs are well-attended.

Still, it’s never tiring to hear positive stories of players’ experiences with the organization. Of course, you’re never going to get a rookie telling stories of his former college teammates warning him about how bad he’s about to have it because of where he was drafted, but Leal did seem genuine.

And he’s in the right room, as well. He’ll have the proper leadership under Cameron Heyward and Tyson Alualu, something he also talked about in the same interview. Hopefully Stephon Tuitt will be there as well, at some point.