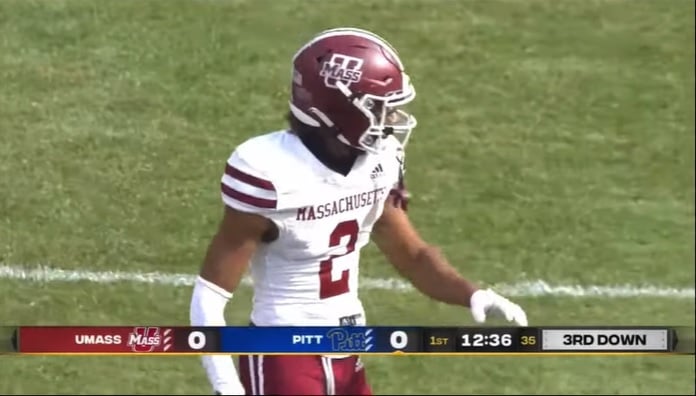 One member of the Steelers’ 10-man undrafted free agent class will be ready as soon as he steps foot on the field for rookie minicamp. Bryce Watts, a cornerback from UMass, has been waiting for his shot in the NFL. “I’m not nervous at all. I’m ready. I’ve been waiting for this moment all of my life,” Watts said. “I’ve thought about this moment 1,000 times in my mind and how I’ll react,” Watts told Kyle Grabowski of the Daily Hampshire Gazette.

Watts played all 12 games for a UMass team that struggled mightily in 2021. A transfer who previously played at Virginia Tech and North Carolina, Watts made 43 tackles, broke up four passes, and was responsible for half of the Minutemen’s interceptions, with one. While Watts had an extra year of eligibility, he declared early for the draft to get one step closer to his dream and due to the fact that he’s already 24 years old. Watts never played at North Carolina after transferring from Virginia Tech, but at Tech he had 29 tackles, seven pass deflections, and an interception during his first two seasons in Blacksburg. The Steelers had also been in touch with Watts prior to the draft.

Watts added 20 pounds of muscle in the pre-draft process, bumping his frame from 170 to 190 pounds. His athleticism is an asset, as he ran a 4.39 40-yard dash at his Pro Day and registered a 37.5-inch vertical jump. Watts actually faced off against Steelers’ first round pick Kenny Pickett and the Pitt Panthers in UMass’ first game of the year. In that game, Watts had six tackles and a pass deflection and had a really nice pass break-up against Biletnikoff Award winner Jordan Addison in one-on-one coverage on a deep ball. He also had an interception in that game, but it was taken off the board due to a penalty.

Watts’ athleticism and motor help him close quickly on short passes and screen passes. Adding 20 pounds will help him with the physicality of NFL receivers, although he can be inconsistent shedding blocks and needs to improve his tackling. His coverage skills are decent, but he has a tendency to try and bait the quarterback, which can lead to him giving up big plays. However, his physical tools make him an intriguing fit in a Steelers cornerback room that could absolutely use more depth. Along with Watts, Pittsburgh also brought in former USC cornerback Chris Steele as an undrafted free agent.

If you want to watch more of Watts against Pickett and Pitt, check out this clip.