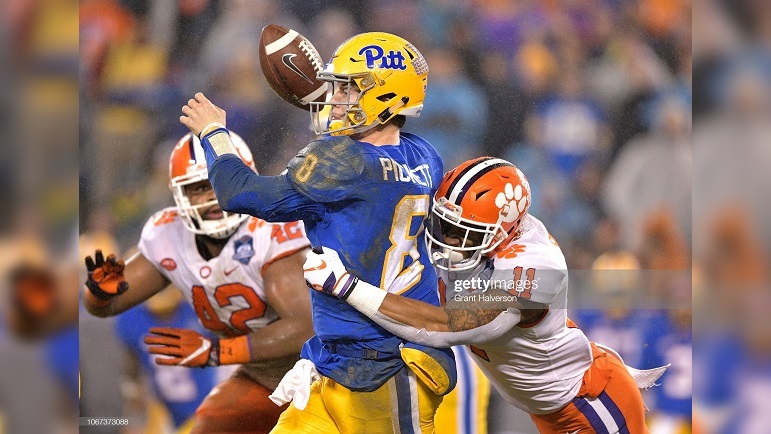 The Pittsburgh Steelers selected quarterback Kenny Pickett at 20th overall in the first round of the 2022 NFL Draft a little more than a week ago and since then, we’ve been able to take several deep dives into his college tape. One deep dive into Pickett’s tape that did over the weekend consisted of me looking at all his fumbles from his college career. As a result of that deep dive, I can now share my findings that I have managed to contextualize.

For starters, you will likely see several numbers floating around concerning the times that Pickett fumbled during his college career at Pittsburgh. 38 in total is likely what you have seen on some sites in posts. In reality, that number can be considered correct, but within that, all 38 of them need context, however.

Now, I have contextualized 36 of the 38 and the two I left out where backwards passes that the eligible receiver failed to catch. There is no sense in charging such fumbles to Pickett as his passes on both throws were very catchable.

Leaving out those two results means there are 36 other fumbles needing context and you can find them tabled below by year and then by play. There is a link to 35 of the 36 plays for you to watch so you can form your own opinion on the context.

Now for the findings:

10 of these 36 fumbles that I contextualized included issues with the snap. Five were off target while five others are deemed good snaps that Pickett just dropped. Only two of those 10 resulted in turnovers. On several of these, Pickett was able to possess the football and even attempt a pass.

Another six of these fumbles happened via handoff exchanges with either a running back or a wide receiver. With Pickett playing five seasons at Pittsburgh, that’s a little more than one bad exchange a season. Only one of those six plays resulted in a turnover.

Four other Pickett fumbles from his college career came down the field either on a designed run or a scramble attempt that included him taking a hit.

14 other fumbles by Pickett during his college career were essentially strip sacks. Seven of those included him attempting to throw while in the pocket while seven others happened with him attempting to scramble away from pressure.

Two other fumbles that Pickett had during his college career came as a result of him losing his grip of the football while either scrambling away in open space or on a designed run.

I highly suggest that all of you view as many of these plays that you can. A portion of Pickett’s fumbling problem might be somewhat related to his hand size. He also has a bad habit of carrying the football low and in his throwing hand while attempting to escape the pocket.

Pickett obviously had some ball security issues while in college and quite honestly, it was a lot of little things. Bad snaps are obviously going to happen at the NFL level, so he’ll need make sure to rep such things as much as possible. There are obviously drills for that and also drills that will require him to have to two hands on the football while in the pocket.

As for fumbles via handoff exchanges, those should be very limited at the NFL level and the same goes for excessive bad snaps.

Will Pickett have a fumbling problem at the NFL level? Time will certainly tell. With that said, the Steelers don’t seem to be too concerned about the amount or kinds of fumbles that their new quarterback had during his college career.

Thanks to Andrew Shaver for his help in compiling these stats and plays.