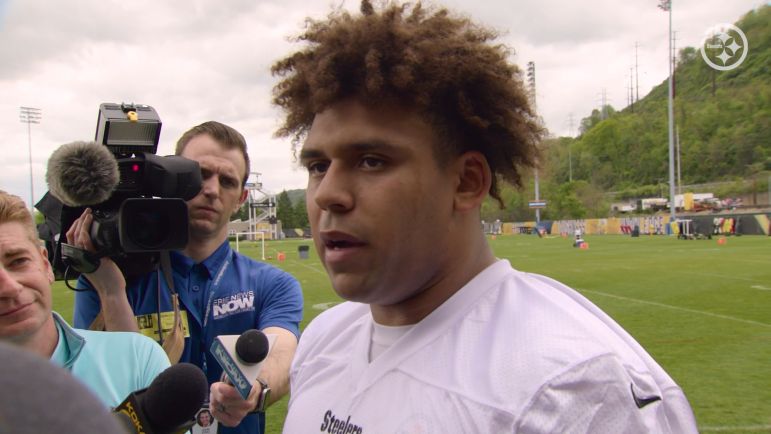 Connor Heyward has likely had to answer at least one question about his big brother Cameron every time he’s ever stepped in front of a microphone. That’s not going to stop anytime soon now that, for the first time in his life, he actually gets to be on the same team with him—both a blessing and a curse.

But the young Heyward is out to set his own legacy, even if it is in the same city, in Pittsburgh, as one of the newest members of the Steelers. The question is what exactly he will be doing for them, at least outside of special teams, as he is not a player with a true position.

“It doesn’t matter. I just want to play football”, he told reporters yesterday on the first day of rookie minicamp when he was asked what position he sees himself playing in Pittsburgh. “I’m a football player, and if it’s tight end, H-back, fullback, I’m gonna go out there and execute and give it all I got, but they kind of see me doing a lot of different things. Whatever they want me to do, I’m willing to do. If you’re a football player and a competitor, you just want to be out there”.

As a member of the Michigan State offense, Heyward began his career more or less executing a traditional running back role for the Spartans. He rushed for 818 yards on 210 attempts and five touchdowns during his first four seasons there.

The coaching staff elected to move him to a less standard role, H-back, for his senior season, allowing him to do a wider variety of things, including blocking in-line and out of the backfield, and to run a more elaborate route tree and see a higher volume of passes.

That turned out pretty well overall, as he emerged out of the Spartans system as a sort of jack-of-all-trades player. Though tight ends coach Alfredo Roberts said after they drafted him that it is there—tight end—that they intend to start him, everybody has been pretty consistently clear that they see a varied role for him in the offense and won’t be boxing him in.

At 6’0″ and 230 pounds, the simple fact of the matter is that Connor Heyward doesn’t really have a true position. He’s not a true running back, nor a true tight end, and certainly not a wide receiver. But he can do a wide variety of things, a whole greater than the sum of its parts, and he’s ready to embrace all that entails.