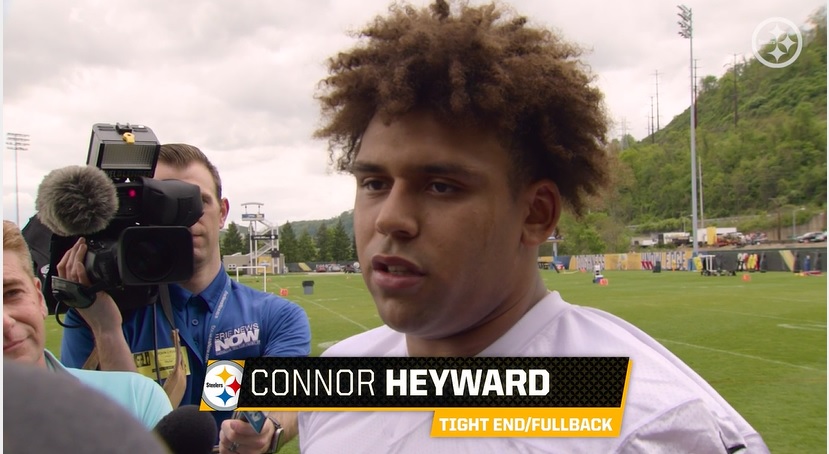 While it’s certainly not a habit exclusive to them, the Pittsburgh Steelers do seem to manage to acquire players who have some type of connection to them, in one way or another. Their first-round pick, for example, has already spent the past five years inside the UPMC Rooney Sports Complex, and their sixth-round pick has been there plenty of times as well.

Those would be quarterback Kenny Pickett and H-back Connor Heyward, respectively. Pickett, a New Jersey native, played his college ball for the Panthers. While Heyward played for Michigan State, and grew up in Georgia, he has long had Pittsburgh ties through his family, his father, Craig, playing for the Panthers, and his older brother, Cameron, perhaps the most high-profile member of the Steelers right now.

So it’s no surprise that the paths of Pickett and Connor Heyward had crossed once or twice prior to their being drafted by the same team in a span of three days. In fact, as Heyward told reporters during rookie minicamp, Pickett was even trying to get him to play together for the Panthers.

“I’ve known Kenny since recruiting days. He tried to get me to come to Pitt, and then when I entered the portal, I came here and took a visit, and we talked before that”, he said. Like Pickett, he also played college football for five years, retaining an extra year of eligibility in 2019 after a four-game junior year.

And both of them really blossomed into the players they were presented as in the 2022 NFL Draft during their final collegiate seasons. Heyward’s involved a position change, but for Pickett, it was mostly a matter of maturation, and a coalescence of talent, scheme, and opportunity.

“It’s really cool to see him end up here, right next door, and how his process has been”, he said of watching Pickett grow and then be drafted to play in the same stadium as he played in college. “Every year he got better. He was a Heisman Trophy finalist. He’s here to work. He had everybody on the same page, and his presence in the huddle was really good”.

That last remark, of course, was regarding their activities during rookie minicamp, Heyward suggesting that Pickett was commanding the offense well, something that even Pickett acknowledged that he felt he did well, saying, “I know what it’s supposed to look like at a high level”.

Will either of them play much at all this year on offense, though? If Pickett plays at all, then he’s going to play a lot, because, of course, he’s going to be the starting quarterback. But he has to win the job from Mitch Trubisky, first. If Heyward gets on the field, it will necessarily be in a limited role offensively, but he should see plenty of time on special teams, provided that he makes the 53-man roster.