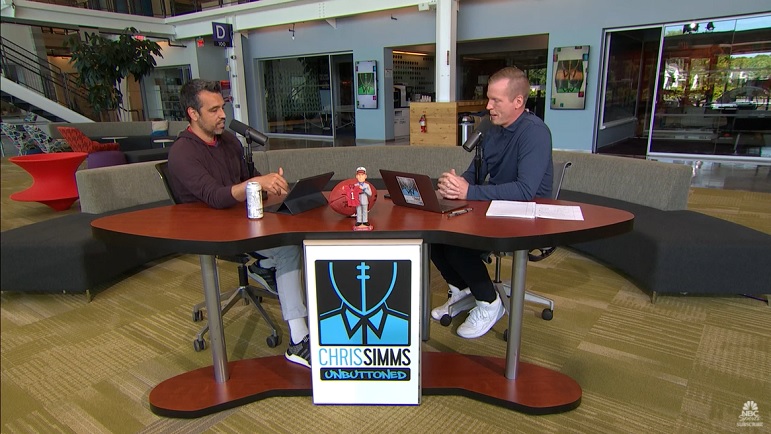 By now, even the most casual fan should know that the Pittsburgh Steelers haven’t had a losing season since 2003. Of course, that had plenty to do with future Hall of Fame quarterback Ben Roethlisberger leading the way. However, his retirement and the influx of youth on the offensive side of the ball has left many at a quandary whether that streak can continue. With oddsmakers setting the Steelers’ 2022 over/under wins at 7.5, NBC Analyst Chris Simms said on Monday that he likes them to hit the over on that total. He used the young bunch of offensive skill position players to back up that claim.

“The team’s gonna be better,” said Simms. “The offensive line’s gonna be better. Najee (Harris) is gonna be a year better. (Pat) Freiermuth, (Chase) Claypool, Diontae Johnson—I like some of what they got in the offense. You’re talking about Mitch (Trubisky) being better than a Roethlisberger. The offense, I just would be shocked if it’s not better. This quarterback fits, I think more what Matt Canada wants to do than what Big Ben did.”

It would be difficult for the Steelers to be much worse offensively than they were in 2021. With OTA’s starting on Tuesday, the offensive line and Harris have all offseason to grow together. Even an average running game would noticeably make a difference. As for the passing game, it’ll help to have three of the expected top targets all 25-years-old or younger with all of them having at least one season of tutelage from Roethlisberger under their belts. And lastly, no matter if it is Mitch Trubisky or Kenny Pickett at quarterback, they’re going to slot in and almost assuredly be more effective.

Admittedly, the first eight games of the Steelers’ 2022 schedule is rather difficult with five playoff teams from last season and two other fringe playoff teams in the Miami Dolphins and Cleveland Browns. But under Mike Tomlin, the Steelers have typically risen to the challenge, look no further than the 2019 Steelers. If it’s anything like that season, Tomlin and the defense are certainly capable of keeping the Steelers’ afloat. But hopefully, the offense can take some of the burden off of them, and if they can, securing another winning season seems all the more likely.