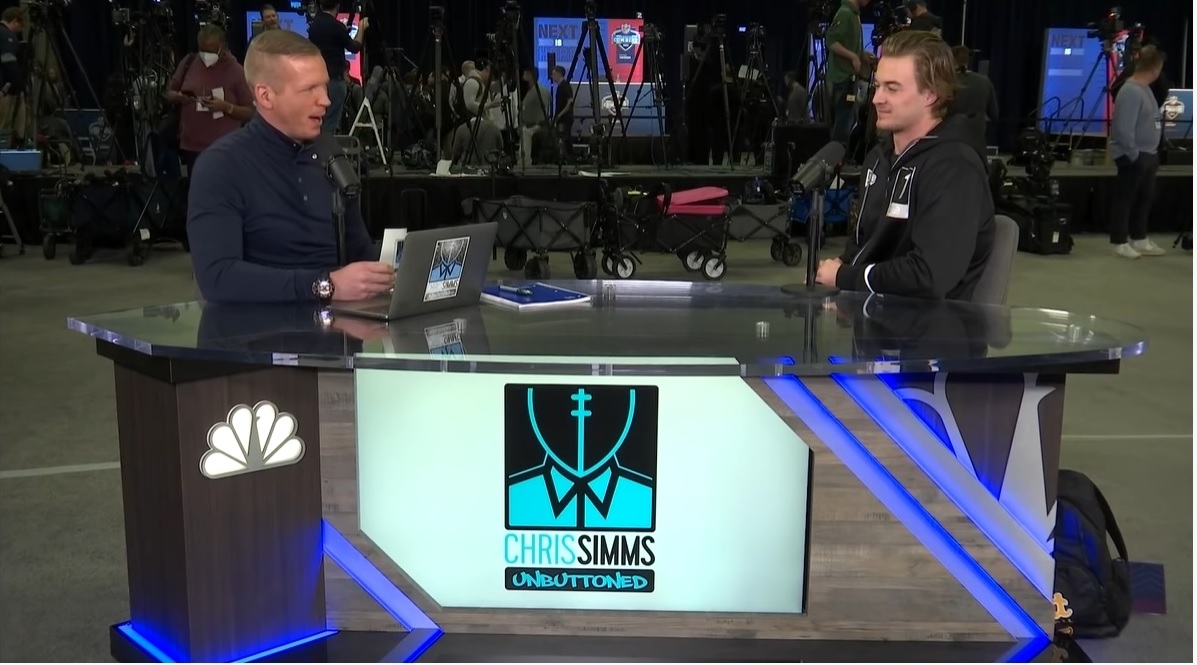 Chris Simms has begun releasing his 2022 NFL QB rankings, announcing the bottom five, #36 through #40, today on his podcast Chris Simms Unbuttoned. Kenny Pickett made the list, coming in at #39. While on paper, that sounds bad, Simms generally had glowing things to say about Pickett and ranked him this low largely due to his rookie status.

Pickett did surpass one veteran starter, Seattle’s Drew Lock, who brought up the rear at #40.

Here’s part of what Simms had to say in evaluating Pickett’s game.

“Kenny Pickett’s top-end talent it’s real good. Is it as good as Drew Lock? No. It’s not a strong arm, he’s not as big of a human being as he is. But he’s as good of an athlete. Pickett’s a good athlete. Pickett as far as the mental aspect is as impressive as it gets coming out of college the past few years. Mac Jones and Joe Burrow are the only two guys I can remember in recent history I go, ‘ooh,’ in the pocket, making decisions, going through reads, putting the ball in the right spot. It’s as good as we’ve seen come out there…it’s the high-end talent I question but it’s still a starting quarterback here.”

High praise from Simms for the mental-game comparison to Jones and Burrow. Both of those guys saw immediate NFL success. Jones beat out Cam Newton for the Patriots’ starting job this year and led the Pats to 10-7 record and Wild Card berth, though they were blown out in the first round by the Buffalo Bills. After tearing his ACL his rookie season, Burrow led the Bengals to a Super Bowl appearance in 2021.

Pickett was the first QB drafted this year and the only one taken in the Top 70, the first 1st round QB the team has drafted since Ben Roethlisberger in 2004. He’s expected to battle Mitch Trubisky this summer to be the team’s starting quarterback, a true and open competition to replace Roethlisberger.

Simms mentioned some of Pickett’s negatives but overall, viewed him as a Day One ready type of passer.

“I wish there was some more big play ability and a little more aggressiveness. But being ready to play in the NFL, I have no doubt he’s ready. He’s going to be able to run the offense. He’s been running a pro offense. He’s very well-schooled at playing within the pocket and making decisions and throws that way. That’s why I like him.”

According to one of Dave Bryan’s studies, Pickett had by far the most pass attempts on “broken” plays in 2021, far more than Desmond Ridder, Sam Howell, or Matt Corral. So he showed the ability to be aggressive, make plays outside the pocket, and Dave’s numbers show that Pickett pushed the ball downfield.

Some of the negatives on Pickett include a look of high-end physical tools, as Simms alludes to, but also a long snap-to-throw time as well as carriage issues while navigating the pocket. Still, he’s a good fit for Matt Canada’s offense and was clearly the Steelers’ top guy. They had the luxury of taking any QB they wanted at #20 and chose Pickett, adamant he’s been their #1 since the fall. If that assessment is correct, the Steelers will be in a great place and Pickett will fly up Simms’ rankings next year. I’m sure you can’t wait for that.

Quarterbacks ranked directly ahead of Pickett included Teddy Bridgewater at #38, Gardner Minshew at #37, and Tyrod Taylor at #36. It’s unclear if Trubisky will make this list or if he won’t be part of Simms’ Top 40. Based on these initial rankings, Trubisky may not be included.