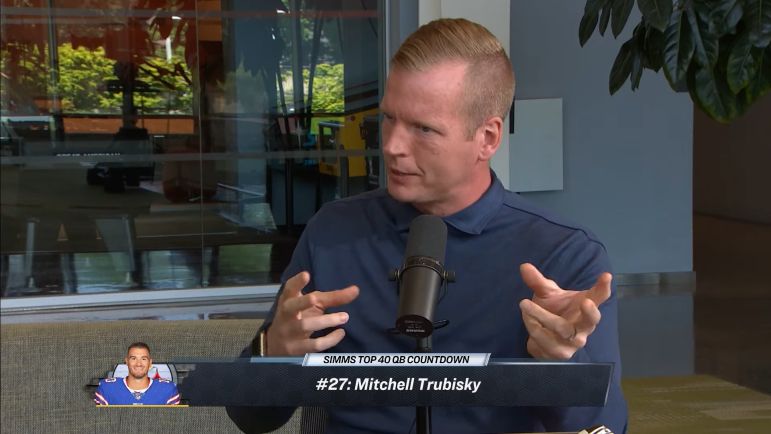 It was a long path to get there, but the Pittsburgh Steelers did manage to come out of the 2022 NFL Draft with the four quarterbacks they were hoping to have—in terms of positional numbers—later on this summer, after using first- and seventh-round draft picks to add arms to that all-important room.

But don’t assume the first-round pick, Kenny Pickett, is going to start. That’s because the Steelers already addressed the quarterback position in free agency with Mitch Trubisky. In the wake of Ben Roethlisberger’s retirement, Trubisky is the quarterback Chris Simms sees as starting in 2022.

He talked about that as he continued his breakdown of the top 40 quarterbacks in the league for the 2022 season, ranking Trubisky at 27 (he had Pickett at 39, as a reminder). And much of what he discussed was how his year as a backup in Buffalo last year changed the league perception of the man teetering on the brink of the bust label.

“I feel like the year in Buffalo let me realize that it was them”, Simms said, speaking of Trubisky’s original team, the Chicago Bears, and Matt Nagy. “It’s not him. And I saw some of those kinks in the armor worked out. And yeah, I know it’s not a lot to go with, but between what I hear and what I see on film, just even from the preseason game, it makes me think a little differently about him”.

He also talked about how there were so many connections to his former offensive coordinator in Buffalo, Brian Daboll, wanting to bring him in after getting the head coaching job with the New York Giants.

“And why do you think Daboll was rumored to maybe have him here with the New York Giants as a guy?”, he said. “Because they started going, ‘He’s fucking smart, he’s got a strong arm, he’s fast like Mariota, he’s 6’3”, 225. Wait, what was the problem? Oh, that’s right, that shit offense in Chicago. That’s right’”.

Of course, there wasn’t much to go on last season. He only threw eight passes during the regular season, completing six, with one of the incompletions being a rough-looking interception. He did look good playing in the preseason, going 21-for-30 for 231 yards and a touchdown, actually handing it to the Bears. “He torched their asses”, as Simms put it. And he also noted that the Steelers were the first to get a look at the ‘Buffalo’ Trubisky.

“You don’t think they got a good look at him in pre-game warmups and saw him in the preseason and talked to some coaches up there, and they were like, ‘We’ve got something here with this guy, this guy’s a really good player’?”, he said. “That’s what happened throughout the league. He erased all the bad that was out there with him, and the league realized, ‘Okay, he might not be perfect, but it wasn’t all him. It was more Chicago than him’”.

Simms is basing these remarks on, as he said, things that he heard from around the league, members of organizations and coaching staffs sharing their observations on Trubisky and how the perception changed during his year with the Bills.

“That’s why I think he’s got put in the spot in Pittsburgh, and I think it’s gonna be tough for Kenny Pickett to beat him out, because there’s real talent with this guy”, he summarized. “Better than what Ben was”, his co-host offered, to which he agreed.