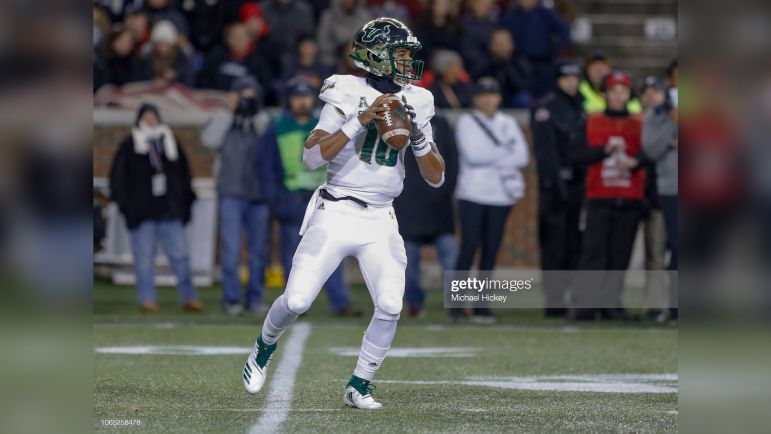 The Pittsburgh Steelers begin their OTA practice sessions today, and there is fair reason to believe that they will have very good attendance—with the quarterback position being no exception. All four quarterbacks are competing for jobs in one way or another. Three of them are new to the team, two being rookies. They know they need this time.

Perhaps especially seventh-round draft pick Chris Oladokun, who is at the highest risk of not having a job in the football industry come September. Ahead of him are incumbent backup Mason Rudolph, free-agent signing Mitch Trubisky, and first-round pick Kenny Pickett. But he doesn’t see himself as an also-ran or an imposter. He believes he is as entitled to the opportunities being on the grass offers anybody else.

“100 percent. I don’t think you’re on this field if you don’t belong”, the rookie told reporters after a recent practice session, via 93.7 The Fan, who broadcast the media session. “That’s something I’ve been telling myself, even before I got into the NFL, that I do belong in the NFL, and I feel comfortable out here with all the guys. I’m just really excited to keep learning and growing as a complete player”.

Oladokun took a roundabout path getting to the NFL, which included starting out in Division I football beginning in 2016, then finding himself the successor to none other than Devlin Hodges at Samford, and finally transferring to South Dakota State for the 2021 season, in which program he performed well enough to get the Steelers’ attention.

Pittsburgh brought him in for a pre-draft visit, and they ended up using their final draft pick to add him to the roster, even after having already taken a quarterback in the first round. But that doesn’t mean he won’t have an uphill battle for a roster spot.

Pickett is obviously not going anywhere. It’s very unlikely that they end up moving Trubisky before he ever plays a snap for them, as well—indeed, he is probably the 2022 starter, for at least the first stretch of the season.

The most realistic path to a roster spot is by beating out Rudolph to be the number three quarterback, or at least playing well enough to make the Steelers believe he is worth a roster spot, provided that they could get commensurate value in a trade for Rudolph.

Of course, even if he doesn’t make the 53-man roster, he can be re-signed to the practice squad. In the age of 16-man practice squads, it’s really no longer any issue to carry a fourth quarterback that you want to see if you can develop.