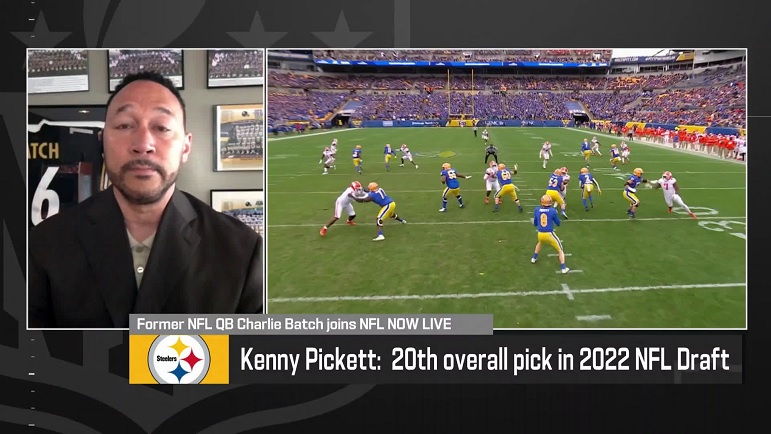 Charlie Batch was on the Pittsburgh Steelers’ roster when the team last took a QB in the first round. He knows what that rookie learning curve can look like. And like Ben Roethlisberger in 2004, Batch believes Kenny Pickett will see the field year one.

Batch joined NFL Network’s Andrew Siciliano to talk about the Steelers’ selection of Pickett and year one expectations.

“Anytime you take a QB in the first round, you want to accelerate that learning curve,” Batch told the show. “All I can do is go back to when Ben Roethlisberger was a rookie in 2004, Bill Cowher and his coaching staff did a really good job trying to accelerate that learning curve. Didn’t expect him to play as early as he did but injuries to myself and injuries to Tommy Maddox that flushed him into the starting lineup in Week 3.”

As Batch notes, Roethlisberger and Pickett are stepping into different circumstances. Roethlisberger was part of a more veteran-laden team and wasn’t considered as “pro ready” as Pickett. Roethlisberger began the year as the #3. But Batch suffered a knee injury and Tommy Maddox hurt his elbow in Week 2 against Baltimore, opening the door for Roethlisberger. The rest is history. Pickett is entering camp competing for the starting job in a youthful offense searching for leadership. Still, both quarterbacks are coming to a team with a top defense (assuming Pittsburgh’s 2022 unit rounds back to form) while leaning on the ground game.

Batch told the show that if Pickett can grasp the offense, he’ll see the field sooner than later.

“It’ll be interesting to see all of these years later, if Kenny Pickett can now pick this offense up. I expect him to play early in the season.”

Pickett will battle free agent signing Mitch Trubisky, inked to a two-year deal on the first day of free agency this offseason. Veteran Mason Rudolph is also in the mix, but it’s far less likely be beats out the other two unless injuries force the team’s hand.

Only one rookie QB has started Week 1 in Steelers’ history. That was Terry Bradshaw in 1970, the first overall pick that year. If Pickett becomes the second, he hopefully has a better day than Bradshaw, who completed just 4/16 passes for 70 yards and an interception in a 19-7 loss to the Houston Oilers. Other Steelers rookies to make their first start a month into a season include Roethlisberger in 2004 and Kent Nix in 1967. Nix lost his start while Roethlisberger, of course, won his and all the others during his first regular season in the league.