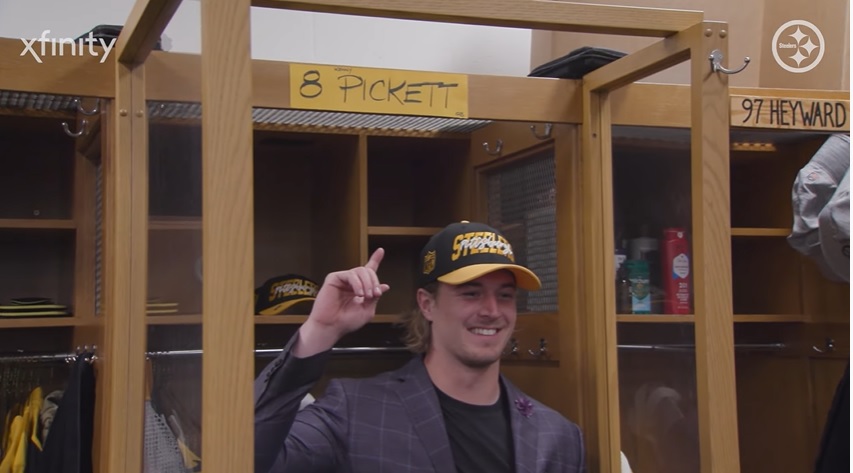 Without Ben Roethlisberger, the Pittsburgh Steelers are looking for a clear leader on the team. That man might just be Cam Heyward. And he’ll help mentor the player who can hopefully become the team’s next franchise QB and face of the organization, Kenny Pickett.

Friday kicked off the Steelers first day of rookie minicamp practices. ESPN’s Brooke Pryor spoke with Connor Heyward, who revealed his locker is next to his big brother’s. And interestingly, that Cam’s locker stands next to Pickett’s.

We're scheduled to back in the locker room for the first time in two years in the next few weeks, but got a nugget today from Connor Heyward:

Cam Heyward's locker is between Connor and Kenny Pickett's. Cam's gonna be keeping the young guys in line.

You can actually see the locker setup in the latest edition of The Standard as aired on the team’s YouTube channel earlier in the week, as you can tell in the header photo and as I’ll re-post below.

If you’re wondering, that clip also showed OLB Derrek Tuszka’s locker to the left of Pickett’s.

Heyward has been one of the Steelers’ defensive leaders for year, a professional on and off the field. He was mentored by the likes of Aaron Smith and Brett Keisel under old-school coach John Mitchell and has become one of the organization’s central figures. His leadership will be needed this year more than any before after the loss of defensive leadership like CB Joe Haden and of course, Ben Roethlisberger’s retirement.

The Steelers’ leadership room looks much different now than it did 24 months ago. Pittsburgh has one of the youngest offense’s in football and have spent the top-end of their last two drafts retooling their offense. In the top three rounds of the 2021 and 2022 drafts, the team has taken five offensive players with their six picks: RB Najee Harris, TE Pat Freiermuth, C Kendrick Green, QB Kenny Pickett, and WR George Pickens.

That’s an infusion of talent this offense needed but it potentially creates a leadership void. For someone like Pickett, his leadership skills are almost as important as anything he does on the field. This team needs a leader on that side of the ball and the Steelers know it. There’s no one better to serve and mentor than Heyward, who has gone from wide-eyed first-round pick to wise veteran throughout his career.