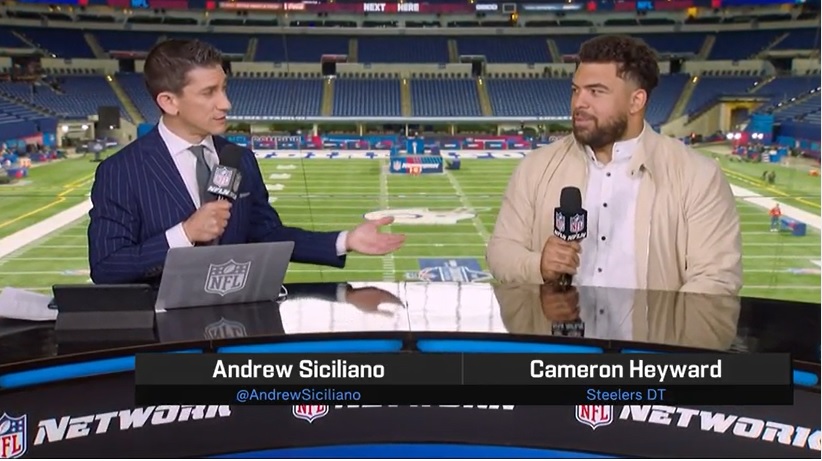 Cam Heyward, 33, has spent 12 seasons thus far with the Pittsburgh Steelers, while retirement hasn’t been on his mind, life after football has. Heyward said on the Mina Kimes Show featuring Lenny podcast that he plans on playing another five seasons. Heyward has thought about what life after football would be like.

This offseason, Heyward spent some time at media bootcamp. He has the voice and charm to be in the media field. Heyward has been on some podcasts and even played as a contestant on Celebrity Family Feud. Being in the media field almost seems like a no brainer for Heyward.

“[All] these years I’ve done the interviewing part where, you know, everybody asks you the same questions and you only see one part of it.” Heyward said on the podcast  “And then to under understand the other side and understand all the work you guys do was really cool”

A few months ago, Heyward got to be in-studio for a half-hour as a guest appearance on the Pat McAfee Show.  While many of the topics were football related, you could tell that Heyward was enjoying himself. Also hard to say no to being in the media field when you are being interviewed by a former player who currently sits at the mountaintop in the sports media field.

Even Tom Brady after he retires has plans on being in the booth. While many have called the numbers false, his contract was reportedly 10 years, $375 million. Money in the media is there, and Heyward is joining at a great time.

Many players in various sports have joined the media field, while a lot of them don’t stay for long. As a fan it’s cool to see your favorite player on television or listen to them on a podcast.

Whether Heyward wants to be on television or behind a microphone, there will be an entire fanbase ready to fall in love with Heyward all over again.