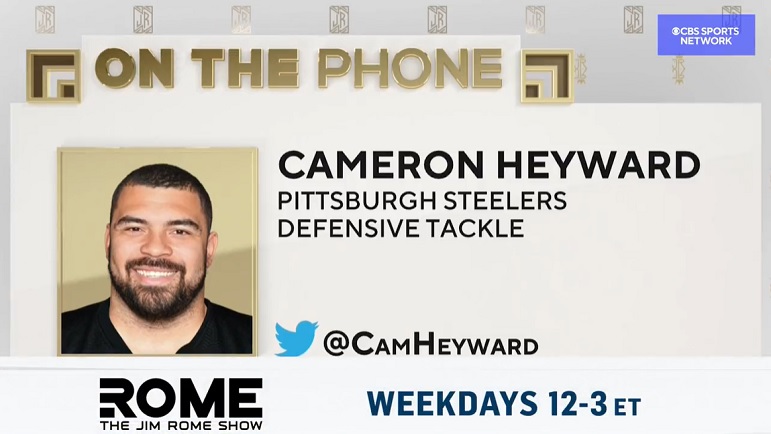 Aside from 2019, Pittsburgh Steelers’ defensive tackle Cam Heyward has only played alongside one quarterback in future Hall of Famer Ben Roethlisberger. But with Roethlisberger’s retirement and the organization expecting a quarterback battle throughout the offseason, that will soon change. First-round draft pick Kenny Pickett is one of three players, along with veterans Mitch Trubisky and Mason Rudolph, looking to be the future at the position. Heyward, being a captain and the stalwart that he is on the Steelers’ defensive line, is never shy about speaking out. On the Jim Rome Show on Monday, he provided some optimistic thoughts on Pickett and his reaction to the selection.

“Man, I’m excited,” said Heyward when speaking to Rome. “I got to watch Kenny these past couple years and haven’t got a chance to really interact with him, but I can see the type of leader he is. He’s got some wheels, hits people with a fake slide. I don’t know if you want to keep doing it at the next level, but he’s got a great arm and a good kid and we gotta embrace him and bring him into Steeler life. So we’ll see.”

Of course, if there’s anyone that knows the Steeler way, it’s Heyward, who has been a full-time starter for Pittsburgh for the last nine seasons. His leadership ability is exactly what the Steelers have needed. With Heyward now being the second-oldest player on the roster behind only Tyson Alualu, he will have to embrace that role even more, especially with seven draft picks, including his brother Connor Heyward, on the way. He touched on the importance of the Steelers’ culture and how it drives the organization.

“I think the culture outweighs everything. We’ve had good players, great players and they’ve all continued to just keep the ship running and this bus going. And as newer guys come in and I know we haven’t had a quarterback change in so long, but there’s a legacy you have to uphold. There’s a tradition and a history you have to respect. And I know Kenny knows that, but that’s for every draft pick, that’s for every player, that’s for every coach, that’s for every trainer. We live and breathe that and we embrace it and we make sure we’re better because of it.”

There are few players in the NFL who will have more pressure on them in the next few seasons to produce than Pickett. Replacing a talent like Roethlisberger, who never had a losing season in his career, will be far from easy. But if there’s one player that Pickett might be able to lean on to teach him how to be a professional and how to be a Steeler, it’s Heyward.

Listen to the full interview below.