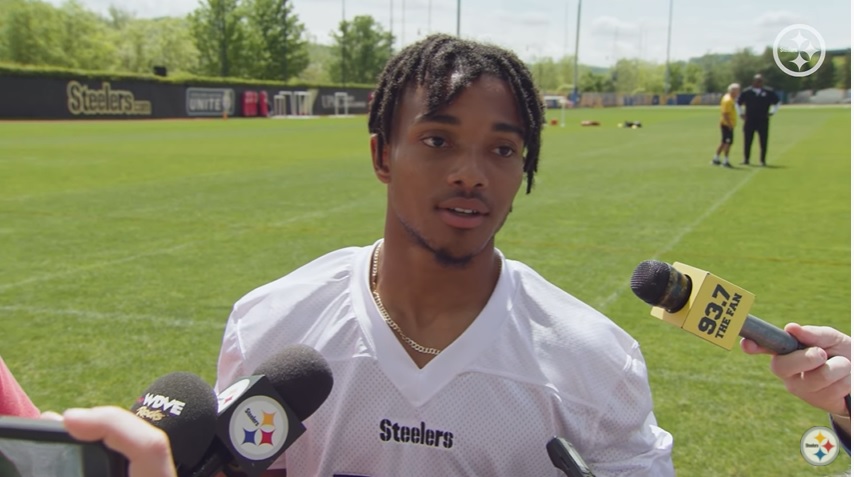 Across the NFL landscape, many rookie players carry a chip on their shoulder when entering the league. This type of intrinsic motivation fuels a burning desire from within, whether it’s from being drafted later than expected or to prove all the nay-sayers wrong, the people who said they couldn’t make it to this point or they’d never pan out. Connor Heyward, the Steelers’ sixth-round pick in this year’s draft, echoed similar sentiments a few days ago at rookie minicamp, when he said that the thought by many that he’s only on this stage because of his brother Cameron, actually motivates him even more.

Yesterday, the team’s fourth-rounder, Calvin Austin III, a jitterbug-type of wide receiver, shared similar thoughts as his rookie mini-camp is fully underway. And as usual, his smaller stature at 5-foot-8 and 170 pounds, is the centerpiece that fuels the fire of his fearless mentality.

“I would just say my heart,” Austin told reporters via the team’s YouTube channel. “When I get out there, it has never been a thing where I’m just like ‘man these guys big’ or ‘I’m small’, I’ve never felt that way. When I get out there, I’m a dawg. So I’m just ready for whatever competition, whoever’s in front of me. And when I’m on the field, I have no fear.”

An All-American track star while at the University of Memphis, he juggled both sports, putting to good use his 4.32 40speed as he racked up back-to-back 1,000-yard receiving seasons in 2020 and this past season, while garnering First-Team All-AAC honors. It’s also noteworthy that this past season, he sported a robust 27.0 average on punt returns, including a 94-yarder. Obviously, he’s a speed demon who, despite his size, has the game breaking ability to alter a game any time the ball is in his hands.

When one thinks of NFL speed, the name most likely to pop into one’s mind is newly-acquired Miami Dolphins’ receiver Tyreek Hill. Interestingly enough, Tony Pauline of Pro Football Network, a talent evaluator for almost 40 years, thinks Pittsburgh got a very similar type of player in Austin, who he expected to be a day two selection.

“I thought he could have gone in Day 2 to the Kansas City Chiefs,” Pauline said on 93.7 The Fan. “I thought he would have been an outstanding replacement to Tyreek Hill, if there is such a thing. Yeah, he’s only 5-foot-7 and-a-half but he plays big football.”

Hill is listed at 5-foot-10 and 185 pounds, so Austin will need to hit the weight room if he wants to gain a physique like his. However, their 40 times are not separated by much, as Hill reportedly has ran a 4.29. In Matt Canada’s offense this upcoming season, it’s not hard to envision him employing Austin all over the formation, whether it be on jet sweeps or the intermediate passing game. It wouldn’t be any shock at all to see him used as a punt returner on Danny Smith’s unit as well, as his aforementioned average is eye-opening and could help tilt the field in the offense’s favor. Just as long as the emphasis is getting the ball into his hands in space and letting him put his world class speed to good use.