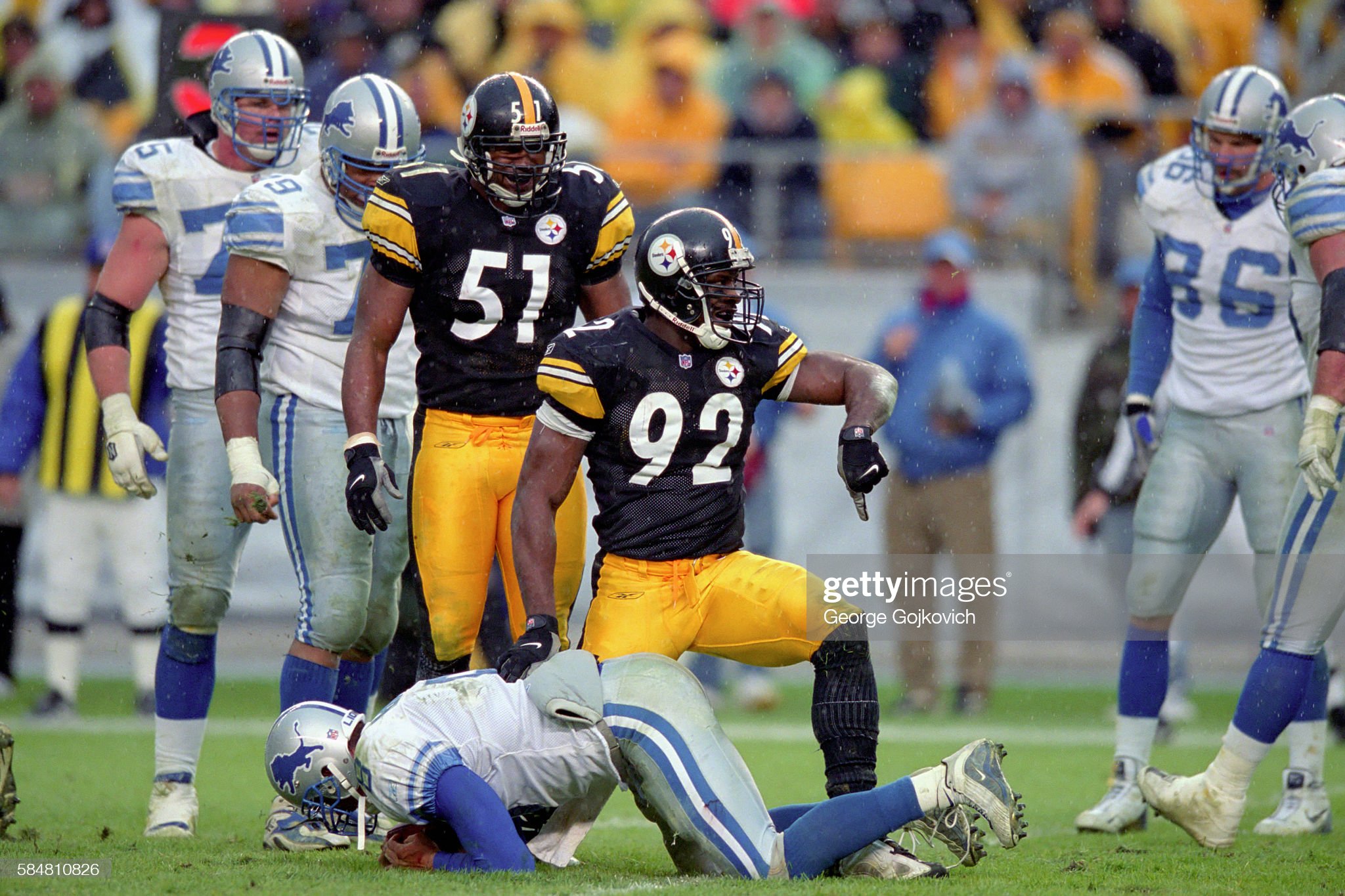 Of the 25 Hall of Famers in Pittsburgh Steelers’ history, just three are linebackers despite there being a long, illustrious history at the position in the Steel City.

Therefore, working within the parameters of my “rules” for my All-Time Steelers team using non-Hall of Famers, I have quite the list to choose from for the black and gold at the outside linebacker position in the 3-4 scheme I’ll have my defense running. Of the top 10 players in Steelers’ history in sacks, just one player — Joe Greene — is in the Hall of Fame.

I’ve already used LC Greenwood along my 3-4 defensive line, and I won’t be using James Harrison or TJ Watt for this piece, because I have full confidence that both get into the Hall of Fame quickly after their playing careers, with Harrison obviously first up.

Therefore, I have quite a database to choose from. That’s a blessing and a curse for me, because there’s so many impactful names I could go with for the position in my piece.

In the end, I settled on two familiar names that I saw quite a bit of live during the formidable years of my childhood.

Below is a reminder of how the offense and defense will look for this series, as well as highlighting some of the previous pieces in the series overall.

With a stout defensive line in the trenches, I decided to go with serious athleticism and speed off the edges in my 3-4 scheme, selecting Jason Gildon and Joey Porter as my outside linebacker duo, edging out the likes of Greg Lloyd and LaMarr Woodley on my all-time non-Hall of Famers team.

One was much easier to select compared to the other. That player?

For my money, Gildon might be one of the most underrated players in Steelers’ history. Though he didn’t truly start until his third season in Pittsburgh, Gildon had six seasons of at least 7.0 sacks with the black and gold, including three seasons of at least 11.0 sacks in the vaunted Steelers’ defense.

A third-round pick in 1994 out of Oklahoma State, Gildon was primarily a special teams player his first two seasons before stepping Into the starting lineup in 1996 after Greg Lloyd went down with a torn ligament in his knee in the season opener. Seizing upon the opportunity, Gildon recorded 7.0 sacks in his first season as a starter, carving out a role overall before then recording another 5.0 sacks in 1997.

With 27 days until Steelers regular season football begins, here's Jason Gildon with a 27-yard scoop and score fumble return against the Lions in 2001. #Steelers #HereWeGo pic.twitter.com/PmHyx7hELa

From there, Gildon then started across from Lloyd in 1998 and 1999, which saw him truly break out, recording 109 tackles and 19.5 sacks in the two seasons combined, putting himself on the map as one of the top pass rushers in the NFL.

Things slowed down from there for Gildon as Joey Porter emerged as the next star of the Steelers’ defense. Gildon recorded 9.0 sacks in 2002 before then recording just 6.0 in 2003, which ended up being his final season with the Steelers. That season, he set the franchise record for most sacks in Steelers’ history, before that mark was ultimately broken by James Harrison years later.

Following the 2003 season, Gildon left for the Buffalo Bills in free agency, spending training camp in Buffalo before being cut. Midway through the 2004 season Gildon caught on with the Jacksonville Jaguars, recording three more sacks before calling it a career.

Opposite Gildon for three seasons in Pittsburgh was Porter, who quickly became one of the most feared pass rushers the NFL had seen in awhile.

Carrying a significant swagger with him, Porter struck fear in opposing tackles and quarterbacks.

A third-round pick in 1999 out of Colorado State, Porter —like Gildon — spent the early portion of his career on special teams. In 2000 though, Porter stepped into the starting lineup and immediately put up a 10.5-sack season, putting the league on notice.

From there, Porter then recorded 9.0 sacks in 2001 opposite Gildon, and then went on a run. Another 9.0 sacks in 2002 earned him his first Pro Bowl nod and a First Team All-Pro honor. Porter then took a step back in 2003 due to injuries, recording just 5.0 sacks, but 2004 and 2005 saw him get back to the Pro Bowl both seasons, while earning a Second Team All-Pro honors both seasons, which included another 10.5-sack season in 2005, helping the Steelers win Super Bowl XL.

Porter spent one more season with the Steelers in 2006, recording 7.0 sacks before the Steelers ultimately cut him in March of 2007, instead of paying him a $1 million roster bonus. Porter, unsurprisingly, went on to sign a 5-year, $32 million deal with the Miami Dolphins in free agency and rewarded them two years later with a career-high 17.5 sack season, earning First Team All-Pro and Pro Bowl honors.

For his career, Porter finished with 98.0 sacks, including 60.0 sacks with the Steelers, which ranks him seventh all-time, one spot ahead of defensive end Keith Willis with 59.0.