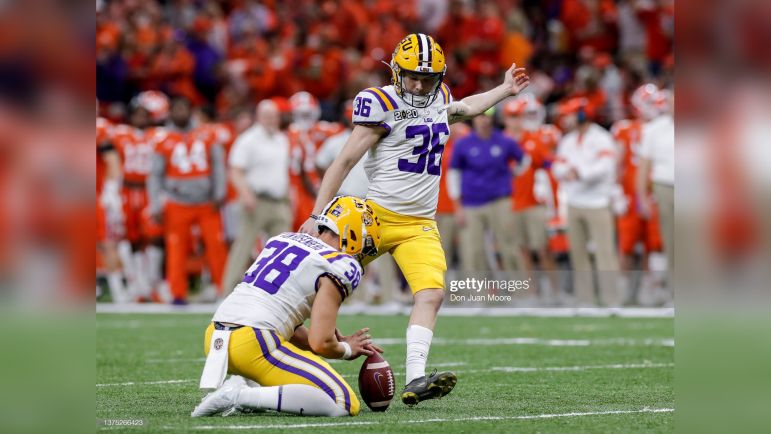 The AFC North is arguably one of the top divisions in football for quarterback play at this point. It’s also one of the best in terms of kickers, and the Cleveland Browns made sweeping efforts to lock in their men in both categories this offseason.

You already, of course, know all about the trade for Deshaun Watson. But this past weekend, they also were one of the teams who jumped into the fourth-round fray and drafted a kicker, hoping to finally lock down that position and have a stable presence there the way all of their divisional opponents do.

That player was Cade York out of LSU, the consensus top kicker in this draft class. He went 54-for-66 during his time in college over three seasons, including going 15-for-18 last year. He also showed that he has some leg with a 57-yard field goal, which was a game-winning attempt, in 2020.

Last year, the Browns’ kicker was Chase McLaughlin, who completed only 15-of-21 field-goal attempts over the course of the season, although he did go a perfect 4-for-4 on attempts of 50 or more yards. McLaughlin spent time with five different teams between the 2019-20 seasons.

The Browns as a team went 19-for-24 during the 2020 season as well, under 80 percent, which is far below the league standard. It’s been a while since they have had a kicker make 90 percent of his field goals in a season. They believe York can be that guy.

In case you happen to be wondering, yes, it’s entirely normal for kickers to get better in the NFL compared to what their college numbers look like. Justin Tucker, widely regarded as the best kicker to ever play, went 40-for-48 during his college career, or 83.3 percent. He went 17-for-21 in his senior season, or 81 percent.

Teams have to make projections even for kickers, about what they can look like with pro-level coaching and natural physical maturation. They have to look at the actual tools that the kicker has, the mechanics, what is workable and what isn’t. And then there’s the intangibles, like making kicks under pressure.

“That is the biggest thing I changed in college my freshman year was improving that mental game”, York said after he was drafted. “It’s not necessarily trying to eliminate pressure because one of my favorite quotes is ‘Pressure is a privilege’. It’s just knowing that you are going to have times when you feel pressure, but it’s making sure that your body can take over, you go back to muscle memory in those moments and your mind does not take over”.

With Tucker, Chris Boswell, and now the young Evan McPherson making up the rest of the kickers in the AFC North, he will be held to a high standard, especially when a divisional game is on the line—and on the end of his foot.