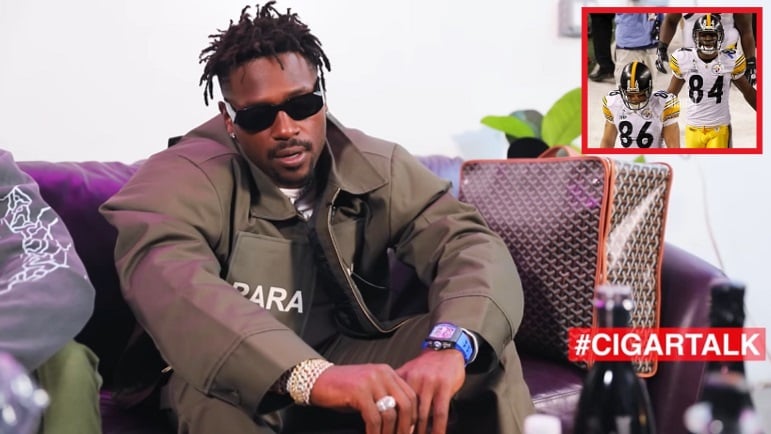 Former Pittsburgh Steelers wide receiver Antonio Brown recently appeared on the Cigar Talk podcast and talked about his experiences with Steelers’ legend Hines Ward and his attitude after being a sixth round pick.

“Nothing is given. You have to work for every thing you have. I’m actually grateful for going late in the draft because it allowed me to be disciplined in regards to some of the other guys getting opportunities early, getting a lot of money early. But I don’t regret nothin’ from my situation and how it happened,” Brown said.

Brown was the 195th overall selection in the 2010 NFL Draft after an impressive college career at Central Michigan where he had at least 998 receiving yards in every season for the Chippewas. Brown didn’t see the field much during his rookie year, but had a 75-yard performance in the divisional round of the playoffs against the Baltimore Ravens. Brown came into his own in year two, hauling in 69 receptions for 1,108 yards.

“In life, you got to make the most of your situation, and not make excuses, and be able to overcome adversity. I think going late-round kept me hungry to keep goal driven, to stay motivated, and accomplish my goals,” Brown said.

During his first two years in the league, he played alongside Ward, one of the most prolific receivers in Steelers history. Brown talked about playing behind Ward and working with him in Pittsburgh.

“I’m trying to tell him, ‘Hurry up and get out the way [laughs].’ I’m trying to pave my own time. But just grateful to be around him and learn the intangibles of what made him great. But you know, when you in the NFL, it’s time to pave your own way, set your own principles. You know what I mean? At that point, Hines Ward was not the same guy I looked at in college,” Brown said. He said he felt that it was his time to take his spot when he entered the league.

Brown was evidently eager to take over the No. 1 receiver role in Pittsburgh, and he eventually did so with Ward’s retirement and the departure of Mike Wallace in free agency. Brown was arguably the best receiver in the NFL during his time in Pittsburgh, and although he had a tumultuous ending to his tenure, there’s no denying his impact. With Pittsburgh, Brown hauled in 837 receptions for 11,207 yards and 74 touchdowns. He led the league in receptions and yards twice, and was a seven-time Pro Bowl selection and five-time All Pro, exceeding Ward’s marks as a four-time Pro Bowler and three-time All-Pro. Still, it’s clear that Brown valued the time spent with Ward and watching him work and prepare. As a young receiver, learning from one of the best to ever to do it surely helped Brown develop into the player he became.

Given that Brown’s tenure with the Tampa Bay Buccaneers ended with him walking off the field during a game, it’s unlikely he gets another chance to play in the NFL. In the short-term, Brown will likely be remembered more for his off-the-field antics and problems than his play on the field, but there’s no denying that he was one of the best receivers in football during the 2010s. His selection in the 6th round will definitely go down as one of the best draft picks of Kevin Colbert’s career, and one of the best draft picks in NFL history.