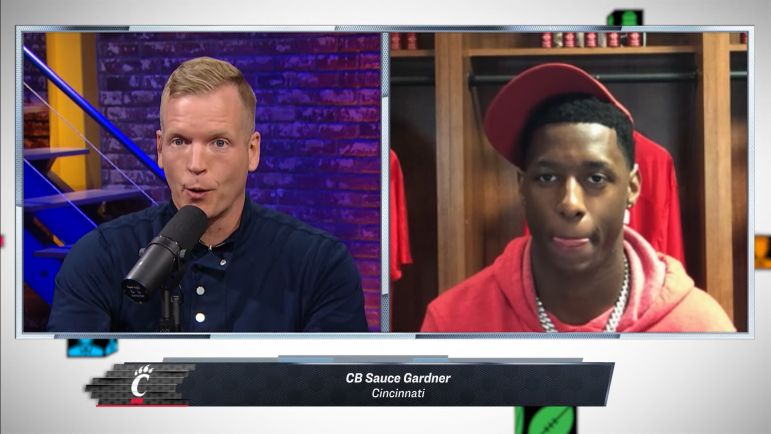 It caught a lot of people by surprise when the Pittsburgh Steelers double-dipped at wide receiver relatively early in the draft, taking Calvin Austin III out of Memphis in the fourth round after having used their second-round pick on Georgia’s George Pickens. Perhaps nobody was more surprised than the Baltimore Ravens, who reportedly were set to draft him with the next pick.

But Austin, standing at all of 5’8”, has made a career out of surprising people, including Ahmad ‘Sauce’ Gardner, one of the top cornerbacks in this draft class who was taken in the top 10 by the New York Jets. Gardner talked to Chris Simms of Pro Football Talk just days before the draft, and he singled out Austin as one of the most difficult matchups he had in college—and one he wanted another shot at:

He caught me at a time where I was still getting used to playing corner, me being a sophomore, and I wasn’t used to guarding smaller guys. But he gave me the reality check, like, ‘Alright, I’m gonna start going against guys’, like my boy Tre Tucker in Cincinnati. He’s a smaller guy, but he ran like a 10.3, 10.4 100-meter, runs like a 4.3. So I started getting work with him in practice all the time, so I was looking forward to going against Calvin Austin my junior year, but they weren’t on the schedule.

Cincinnati played Memphis on Halloween in 2020. Though Cincinnati won in a landslide, 49-10, Austin was one of the most notable players on the field. By the raw numbers, he put up 121 yards on seven receptions on the day, and as you can see in the cut-ups, he clearly gave Gardner trouble.

The good news for Gardner, if he is true to his word, is that the Steelers do have the Jets on the schedule this year, hosting them at Heinz Field. The dates are not set yet, but he may very well get his next shot at Austin in 2022. As will the two cornerbacks the Ravens drafted in the fourth round instead of Austin.

While there have been mixed opinions about the Steelers’ draft class—and, when is there not?—there has been near-universal praise for what they have done to update their wide receiver room, with Pickens and Austin joining carryovers Diontae Johnson and Chase Claypool, along with others such as Miles Boykin, Gunner Olszewski, Anthony Miller, and Steven Sims.

How the Steelers get everybody on the field remains to be seen. One would imagine that Johnson and Claypool will enter the 2022 season as the starters, and perhaps Pickens will be the third guy on the field. But then where and when does Austin play? How much will they rotate?

The hope is that they will have enough talent, and enough diversity, where they can get everybody on the field. Rotating at wide receiver is, frankly, something they have not been good at over the years, but this has been a year of change, so perhaps we’ll finally see that and other things we’ve been talking about for years.