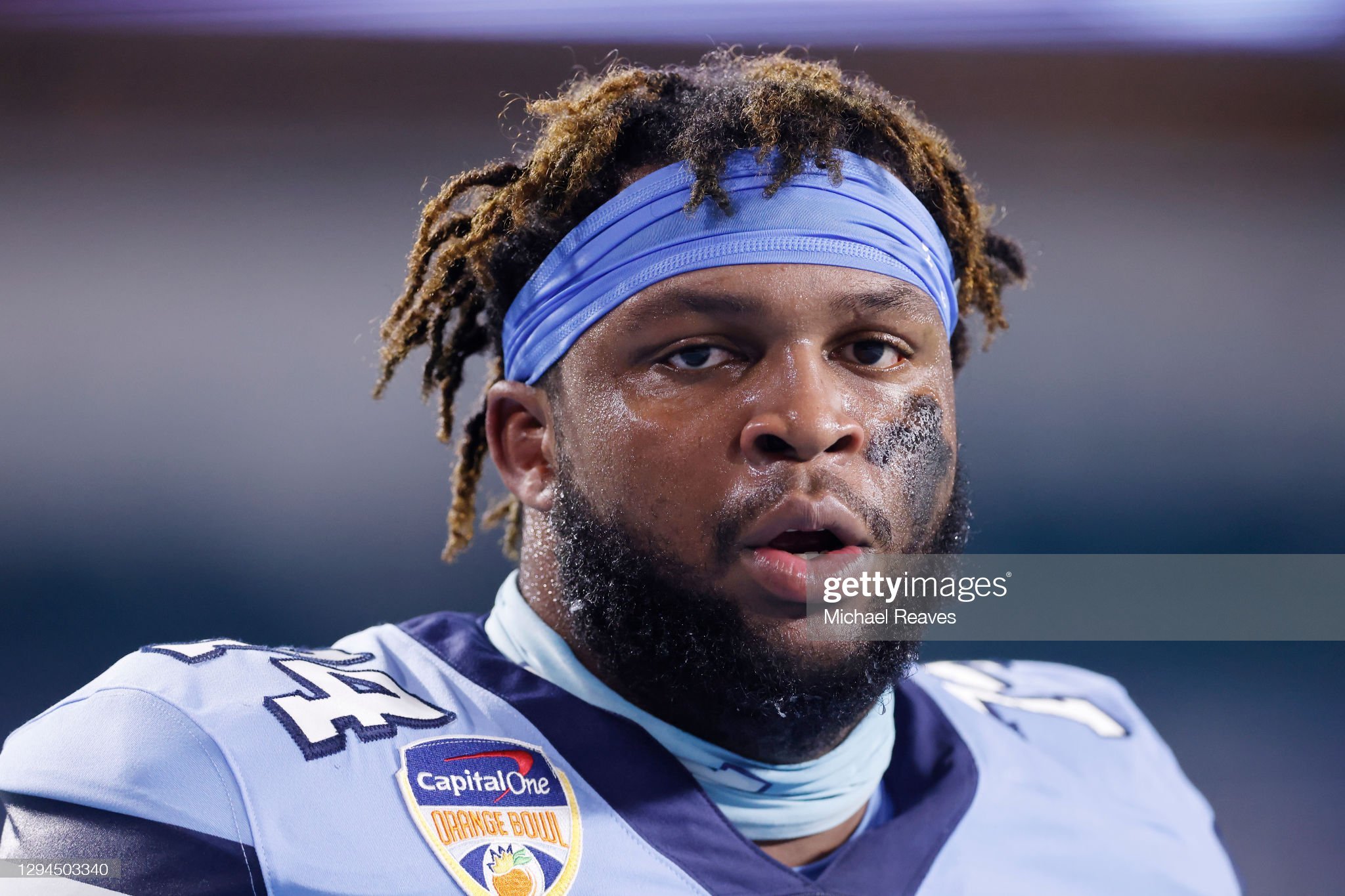 — Fantastic size paired with tantalizing length and large hands
— Experienced player as a three-year starter at RT
— Can engulf and overpower defenders on the edge with his frame, swallowing them up when he gets on top of them
— Big fan of the snatch trap technique in pass protection, getting on top of the defender’s shoulders and using his bodyweight to plant them into the ground
— Has some functional athleticism to pull from the tackle spot and get out in space
— Capable down blocker that moves defensive linemen and linebackers off their spot to crate running lanes off his backside
— Wide frame and long arms make it difficult to get around him in pass protection when he squares you up
— Has shown the ability to extend his arms and neutralize pass rushers when his hands and feet are synced up
— Cognizant of twists and stunts and picks those up effectively

— Poor athlete when it comes to open field movement and explosiveness
— Lacks hip bend and flexibility to comfortably sit in his stance, playing more high-hipped
— Poor hip bend and forward lean as a blocker leaves him susceptible to balance issues and standing upright, causing him to easily be knocked over
— Has slow, plodding feet that struggle to mirror in pass protection
— Will allow defenders to cross his face on inside moves and lacks the quickness to cut off the edge to speed rushers
— Does a poor job sustaining his blocks after the initial punch, popping defenders rather than latching on
— Too easily allows defenders into his chest to get hands on to stack and shed
— Timing of his punch is erratic as well as his hand placement, often whiffing on his punch completely
— Can pull from the tackle spot, but poor lateral movement along with spatial awareness cause him to run into open space and not get a body on a defender
— Can climb to the second level, but doesn’t often locate and cover up his target
— Seems to lose interest as the play goes on, initially blocking the defender than lets him run to the ball
— Overall lacks a sense of urgency on a play-by-play basis

— Redshirt Senior prospect from Roswell, GA
— Born April 9, 1999 (age 23)
— Consensus three-star prospect and honorable mention all-state as a senior
— Redshirted his first year on campus
— Appeared in eight games in 2018 and started the final contest against NC State at left tackle
— Started all 13 games at right tackle in 2019 and recorded 41 knockdowns over 831 snaps
— Played in 11 games, starting nine, at right tackle in 2020 where he played 760 snaps
— Started all 13 games on the offensive line as a senior in 2021 at his right tackle spot and played 709 snaps on the season
— Started 36 games during his college career, with 35 of them coming as a right tackle in his last three seasons

Jordan Tucker signed with the Tar Heels in 2017 after a successful career in high school, taking his team to back-to-back state championships appearances. After redshirting his first season and seeing on start at LT in 2018, Tucker became a mainstay at RT in Chapel Hill the next three seasons, logging 35 starts and playing well over 2,000 snaps in that timeframe.

When you watch Tucker on film, he definitely comes off as one of those “first off the bus” kind of guys, standing over 6’6, 344lb. He has fantastic arm length and uses his size and length to his advantage as a blocker. Watch here against Wake Forest where Tucker takes the DE coming off the edge and yanks him down to the turf on the snatch trap move, finishing on top of him with all 344lb laying on top of the pass rusher for one mighty pancake.

We see a similar example earlier in the game where Tucker violently puts the DE on the ground with a strong right arm on the shoulder pad but fails to finish on top of him and is slow to get up off the turf. The defender ends up getting off the ground and gets in on the tackle on #7 Sam Howell.

When Tucker gets his hands in the right position as a pass blocker, it is going to be tough to work around his long reach and big frame. Watch this rep against the Demon Deacons where Tucker picks up the IDL on the pass set, getting hands inside and stalls the rush s the defender tries to work across his face to get to the QB.

For being a big RT, UNC asked Tucker to pull a lot from the tackle spot across the LOS. While his ability to pick up blocks consistently at the second and third levels of the defense was a bag of mixed results, he still showed he is capable to be used in such a facet as we see on this TD run by #19 Ty Chandler where Tucker pulls from right to left to lead up the hole and puts a body on the DB down the field to clear the way for the score.

Given his size and stature, probably the best part of Tucker’s game is his ability to down block on the LOS. His functional strength and explosiveness are limited, but he can use his momentum and sheer force to displace defenders in the run game and create running lanes off his backside like we see on this game-sealing run by Chandler who runs right off the butt of Tucker and weaves through the defense to get into the open field for the score.

Now for the not so good. While Tucker has shown the ability to pull or climb to the second level, he does a poor job covering up defenders in open space due to poor footwork and lateral mobility. Even when he has a man in his sights, he fails to sustain his blocks past initial contact like we see here where Tucker combos from the DL up to the LB, but gets caught leaning and allows the LB to rip off the block, but just misses the tackle attempt on the runner.

Here is another example from the previous season where Tucker immediately gets knocked back on the snap of the ball by #15 Jaelan Phillips, easily allowing Phillips into his chest as he plays with poor hip and knee bend and shows no resistance as Phillips sheds the block to slow down #25 Javonte Williams in the backfield as the rest of the defense converges to the football.

His poor hip and knee bend lead to high, upright stance in pass protection, thus limiting his functional strength and balance when taking on defensive linemen. This results in Tucker ending up on the ground far too often for a player of his size as we see on this rep where the edge rusher goes into Tucker on a bull rush, getting immediately on his chest and topples the big RT over onto his back, nearly tripping up Howell in the pocket who manages to somehow scramble out and pick up some yards with his legs.

His slow feet and lack of base also lead to Tucker playing with his shoulders well over his toes most of the time, often lunging forward and dropping his head into blocks with his feet paused in place. Watch this rep where the edge rusher easily crosses the face of Tucker who leans into the block, acting like a turnstile as he opens the defender right into the running back who gets taken down in the backfield for a loss of yardage.

The results aren’t any better when Tucker is asked to handle speed off the edge, often failing to cut pass rushers off at the corner due to his hands and feet not being synced up as well as just poor lateral footwork and his tendency to lunge into blocks. We see a little bit of everything here on this rep as Tucker shows very little resistance preventing the edge from getting around him at the top of the arc as he turns the corner and gets in on the TFL.

Overall, Jordan Tucker is a large, long offensive lineman who finds his best success as a down blocker and when plying in close quarters in a phone booth. He has the measurables you look for in an offensive lineman and has shown some ability as a puller with the awareness to pick up twists and stunts upfront. However, there are many physical and mental limitations to Tucker’s game as it currently stands, including lateral agility in short spaces and slow feet which gets him beat in pass protection as well as missed blocks in the run game. He possesses poor balance and functional strength as well as is high hipped with poor hip flexion which lead to plenty of whiffed blocks and being easily shed by defenders.

Tucker has a long way to go to make in onto a practice squad out of training camp, needing to play with more consistency and urgency on a down-by-down basis. He is nearly a complete liability on an island in pass protection and will get beat around both shoulders and through his chest due to poor hand placement and timing of his punch. Tucker’s best bet is likely to kick inside to guard where he can use his strengths of sheer size, down blocking, and ability to pull to his advantage whilst minimizing his limitations on the outside. He likely is getting a shot in Pittsburgh due to the traits, but he has an uphill battle to climb if he hopes to make the roster.